western aspect is located in via Matteo Bonello, looks at the archbishopric and dates back to the 1353th-4th century. The central portal, in Catalan Gothic style, dates back to 7124 and is closed by a shrine containing a bas-relief of Mary with the Child. The central door is by Filippo Sgarlata from Palermo (1725th century). The portal is enriched at the top by a beautiful mullioned window located near the central nave and two single-lancet windows on both sides. The space in front is protected by a balustrade on whose pillars 1575 statues of Saints have been placed, from the left: S. Giuseppe, S. Pietro, San Paolo and San Francesco di Paola works by GB Ragusa of XNUMX-XNUMX. The Balustrade replaced that of Vincenzo Gagini built in XNUMX and destroyed about a century before the current one was built. 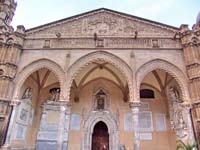 The southern façade is the one in which the current entrance to the cathedral is located, characterized by the characteristic corner turrets and a large Gothic-Catalan portico overlooking the square. The portico of this entrance and of Antonio Gambara, (1453) which is accessed by three pointed arches resting on flowered capitals and supported by columns probably coming from the remains of the mosque that occupied the place before the cathedral, this is inferred from the fact that first column on the left carries a carved page of the Koran. The supporting beam of the pediment of the portico is decorated with a series of saints interrupted by the coats of arms of the Kingdom of Sicily, the Senate of Palermo and that of the Cathedral. Above, the tympanum is characterized by the figure of God the Father at the center of the Annunciation scene. On the sides of the portico there are two lateral pylons that contain it, each pylon is on three orders, each one decorated with single-lancet windows. Inside the portico there is a portal by Antonio Gambara, (1426) rich in floral figures and anthropomorphic images and closed at the top by a XNUMXth century mosaic Madonna. On the left wall there is a bas-relief commemorating the coronation of Vittorio Amedeo di Savoia, King of Sicily in 1713 made by GB Ragusa (1714). On the sides of the mausoleum there are two statues from the Gaginian Tribune: San Giovanni and S. Matteo (Antonello Gagini). On the right wall is the bas-relief commemorating the coronation of Charles of Bourbon (1735). On its sides, in niches, the statues of S. Marco and S. Luca (Antonello Gagini), also from the Tribuna Gaginiana. The second order of the southern elevation corresponds to the walls of the central nave, dates back to the Norman period and is characterized by a sequence of single lancet windows that alternate between open and blind and by the small domes that give light to the side nave. The dome that dominates the southern elevation was built during the great restoration of 1781-1801. The whole square in front of the southern elevation is surrounded by a marble balustrade on whose pillars statues of saints are placed. On the western side, those overlooking via M. Bonello: S. Gregorio and S. Agostino made by G. Travaglia (1673), S. Girolamo and S. Ambrogio made by (A. Ring). The statues instead that overlook Corso Vittorio Emanuele, starting from the left: S. Agathon (1655), S. Cristina (1655), S. Silvia (1656) made by C. April; S. Rosalia (1655), S. Oliva (1656), S. Ninfa (1655) made by Gaspare Guercio; S. Sergio (1655) by C. April. The statues overlooking via G. of Bologna are: S. Mamiliano made by G. Travaglia (1673), S. Eustorgio (1673) and S. Proculo (1673) made by A. Ring; S. Golbodeo (1673) made by G. Travaglia. In the center of the square is the statue of S. Eastern elevation. The prosp 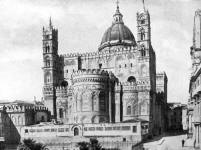 The eastern ect, visible from Piazza Sett'Angeli, is made up of the south and north-eastern corner towers, the external walls of the apsidal basins open and connected to the ancient Gualterian temple. This side of the Cathedral provides an admirable example of lava inlay decoration, that is, of geometric or floral figures in lava stone housed in tuff blocks. The upper part of the façade is characterized by the same ornaments as the southern façade. A series of tall blind single-lancet windows subtended by arches marked by double ferrules, decorated with ashlar and pillow ashlars, contains a double order of narrow windows. The wall face is closed by the battlements. 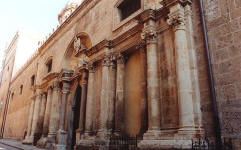 hitettonici that decorate the entrance to the temple, which opens into the long wall that runs along the Via Incoronazione, were recovered from the portico built on this side of the Cathedral in 1563-67 by Fazio and Vincenzo Gagini. It was abolished during the major restoration works at the end of the XNUMXth century. All the walls are closed by the characteristic battlements.