The number in square brackets indicates the position on the map of the Cathedral. 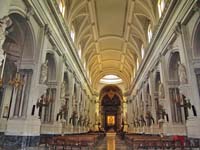 the central nave has wide arches on the sides that rest on capitals supported by columns from the Norman structure and leaned on pillars on which the barrel vault rests. In 1952, some of the statues from the Gaginian Tribune demolished during the major restoration of 1781-1801 were placed close to the pillars. In the central nave, in the pillars at the entrance there are two holy water stoups on the left is the holy water stoup.[9] executed by G. Spatafora and A. Ferraro in 1535, the stoup on the right [16]  attributed to Domenico Gagini (XNUMXth century). 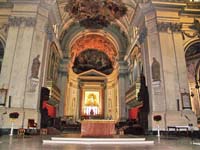 Presbyter [1]. Under the dome is the conciliar altar made by Vincenzo Gorgone. On both sides, the wooden stalls in the Catalan Gothic style (1466). The candelabrum and the episcopal throne on the left come from the Norman church. Above in the basin and in the vault of the choir two frescoes by Mariano Rossi painted between 1802 and 1803: "The expulsion of the Saracens by the Normans" and "The Assumption of the Virgin and the four cardinal virtues". The presbytery is closed by the apsidal basin in which the altar by F. Pinistri (1794) is placed and above it the statue of the Risen Christ. This statue was initially found in the Gaginian tribune demolished during the great restoration of 1781-1801, other statues of the ancient Tribune are placed in niches obtained in the walls of the presbytery. 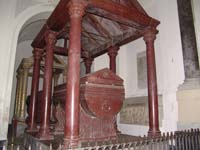 Chapel of Our Lady of the Letter [15]. It's la third chapel (immediately to the left of the entrance) on the altar is the Byzantine painting of the Virgin and Child by Antonio Filocamo. 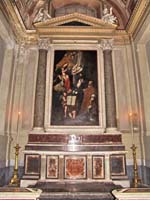 Chapel of St. Ignatius [17]. It is the fourth chapel (immediately to the right of the entrance). Above the altar the painting by Pietro Novelli of the “Apparition of the Virgin to Saints Ignatius of Loyola and Francesco Saverio (1633-1634).

Chapel of Blessed Pietro Geremia [18]. It is the fifth chapel, above the altar the painting by Antonio Manno (1785) dedicated to Blessed Geremia. 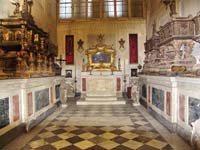 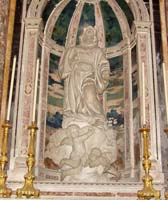 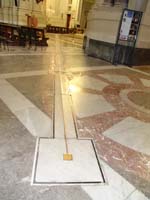 From the Chapel of S. Francesco begins the sundial [2] built in 1801 made in 1801 by the Theatine astronomer Piazzi. It is a brass plank that, embedded in a strip of marble, crosses the floor, along the entire path polychrome inlays depicting the zodiac signs. At solar noon, a ray of sunshine passes through a small hole in the dome in front of the chapel of San Francesco di Paola, and illuminates the zodiac sign of the month. 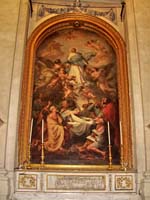 Chapel of Maria SS. Assunta [21]. It is the eighth chapel. Above the altar, the canvas by Giuseppe Velasquez depicting the Assumption of the Madonna (1801). The marble bas-reliefs are instead by Antonello and Fazio Gagini (1535). 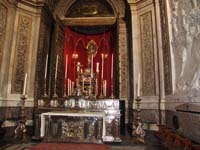 Chapel of S. Rosalia [22]. At the end of the right aisle, there is the Chapel of Santa Rosalia, closed by a brass gate. Behind the silver altar, protected by a copper gate dating back to 1655, is the silver urn of Santa Rosalia made to a design by Mariano Smiriglio (1631). On the side walls bas-reliefs by V. Villareale (1830).

Tesoro [24], [25]. In 2006 in the rooms known as "Sacristy of the Canons"[24] and"New Sacristy"[25] The Treasury is located, consisting of precious objects made between the thirteenth and twentieth centuries, an illuminated breviary of the fifteenth century, an ivory case from the thirteenth century., Monstrances, reliquaries, sacred vestments and various objects found in the royal sepulchers including the crown found together with the rings in the tomb of Queen Constance of Altavilla.

The first room of the treasure [24] is accessed through a marble portal by Domenico Gagini (1568). The left wall is that of the Norman church.

At the end of the room another portal, also by Domenico Gagini (1568) leads to the second room [25] where at the end, in a niche, is kept the first work created by Antonello Gagini for the Cathedral: "The Madonna della Scala" (1503). 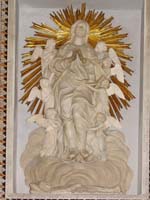 Chapel of S. Maria degli Angeli [11] The statues of the Virgin of the Assumption and the Sleeping Madonna come from the Gaginian Tribune; Above the altar three bas-reliefs by Fazio and Vincenzo Gagini with the washing of the feet, the prayer of Jesus in the garden and the last supper 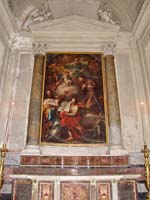 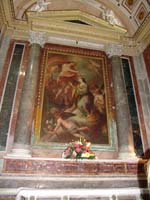 Chapel of S. Cristina [8] The canvas above the altar, which depicts the glorification of the saint, was painted by the Palermo painter Giuseppe Velasquez 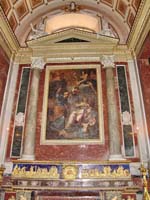 Chapel of S. Pietro and S. Agata [6] Above the altar a canvas depicting St. Peter and St. Agata made by Pietro Martorana (XNUMXth century) 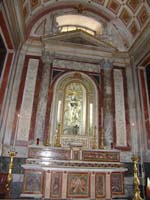 Chapel of the Free Madonna of the Sick [5]. It contains a statue of the Virgin Mary by Francesco Laurana (1469). The name "Libera Inferni" was given to the Madonna in 1576, when Pope Gregory XIII granted this altar an indulgence for the souls in purgatory.

The two marble pilasters on the sides of the altar come from the ancient Gaginian tribune. 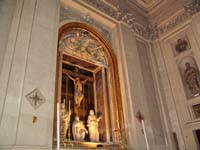 Altar of the Crucifix [4]. The altar contains a fourteenth-century crucifix supported by an agate stone cross from the eighteenth century. At the foot of the crucifix, the sculptures of the Madonna and Magdalene by Gaspare Serpotta (700). In the altar there are nine high-reliefs, the work of Fazio and Vincenzo Gagini, illustrating scenes from the Passion of Christ

Chapel of the SS. Sacramento [3]. It contains a lapis lazuli altar made from a design by Cosimo Fonsaga (1653).

In front of the chapel a silver lamp donated by King Charles of Bourbon.

Crypt [26]. From a Gothic-Catalan portal to the left of the Sacristy of the Canons you enter a room which is what remains of the ancient antitulus of the Norman church and from here you enter the Crypt, which according to some scholars dates back to the sixth century and which was subsequently modified following the construction of the Norman church. It is a rectangular room divided into two naves by columns obtained from previous constructions. The crypt contains 23 tombs, where mainly Palermo archbishops are buried, for the sarcophagi urns of the Roman, Hellenic and early Christian periods have been reused many of them have been modified and equipped with new covers, we indicate only a few:

Urn of Greek origin with a statue of di Giovanni Paternò by A. Gagini

Tomb no. 4: Roman tomb with inscriptions of Archbishop Francesco d'Antiocchia (1320);

Tomb no. 5: Marble tomb of the century. XVI century attributable to the Gagini of Archbishop Ottaviano Preconio (1568);

Tomb no. 6: Urn in limestone tuff from the Norman period. On the lid sit two small dragons with twisted snake tails

Tomb no. 7: Roman tomb depicting the coronation of a poet, among the figures a woman, the 9 muses and Apollo

Tomb no. 9:  Roman urn of the only lay person buried in the crypt, Frederick of Antioch (1305) brother of the archbishops Bartolomeo and Francesco, archbishops (present in other urns), the figure of Frederick rests on the tomb.

Tomb no. 10: Baroque urn adorned with foliage, with mask in the center of the lid

Tomb no. 16: Norman urn of archbishop Gualtiero II, known as “Offamilio” (1190) founder of the same Cathedral;

Tomb no. 18: Tomb of the fifteenth century. of Archbishop Simone Beccadelli of Bologna (1465)