The site falls within the territory of the Municipalities of Vittoria and Ragusa. The soils are mainly sandy. The geological substrates consist of calcarenites, sands and
The climate of the area is Lower Dry Lower Thermomediterranean according to the Rivas Martinez criterion adapted to Sicily by Brullo & al. (1996) The site si
is characterized by being one of the few places in Sicily hosting a variety of completely unique formations and precisely a) cliff formations in Crucianella
rupestris, b) shrub formations with Limoniastrum monopetalum, c) associations dominated by Helichrysum conglobatum var. compactum, d) dune formations
with Prickly Juniper, Retama raetam and Ephedra fragilis, d) Malcolmietalia with Muscari gussonei. In the sea there are submerged grasslands in Cymodocea
nodosa.Analytically the site is divided into various habitats. 1) A part of considerable extension hosts the dune formations with Juniperus oxycedrus subsp.
macrocarpa, Retama raetam and Ephedra fragilis. These formations cover most of the area and precisely that where the AFDS nursery is based in
Contrada Randello. This nursery is on state-owned land consisting of sandy dunes penetrating inland for a course of about 400 m. The dune system
it was reforested in the 50s with Acacia saligna, Pinus halepensis and Pinus pinea. Today the competition between naturalness and artificiality has resulted
a clear and affirmed tendency towards the reconstitution of dune formations (Juniperus oxycedrus, Retama raetam and Ephedra fragilis) and a loss of vitality
of implantation formations. Nevertheless, the still dominant facies is that of the artificial plant. 2) A part located exactly at Punta Braccetto formed
from limestone cliff. Here in the initial stretch (which is the stretch that goes from south-east to north-west) there is the formation called Asparagus-Limoniastretum monopetali
Bartolo, Brullo & Marcenò 1982. Moving towards the north-west you meet the Crucianelletum rupestris while Triplachne settles on thin layers of sand
nitens (Guss.) Link, Daucus gingidium, Catapodium pignattii, Orobanche sanguinea, etc. 3) Moving then beyond the aforementioned nursery you reach the formations
with Helichrysum conglobatum var. compactum exactly on the small promontory of Bianco piccolo. 4) Finally in Contrada Passo Marinaro in correspondence
of the Greek necropolis of the Rifriscolaro is in the presence of Vulpio-Leopoldietum gussonei, including among the characteristics Muscari gussonei, Maresia nana, etc.
The association with Juniperus turbinata and Quercus calliprinos is also present here. Under tufts of Retama raetam, the endemic Torilis webbii can be found.

The value of the site is remarkable. In the meantime, it must be said that biodiversity, however it is considered (in relation to species, communities, forms of landscape, etc.) is
always very high. This is also testified to the public of non-specialists by the beauty of the landscape, and by the number of encounters with "different things"
normally occurring during any excursion. The richness in biodiversity is explained above all by the variety of physical conditions (soils,
exhibitions, etc.), but also from a wide hinterland up to a few decades ago in conditions of great naturalness
Limoniastrum monopetalum, or from Crucianella rupestris, or from Helichrysum conglobatum, or from Muscari gussonei, as well as the Junipero-Quercetum association
calliprini, unique for Sicily, mean that the SCI Punta Braccetto-Cammarana must be safeguarded with absolute priority.
numerous endemic species closely linked to the dune and back dune environments and sometimes located in a few stations in southern Sicily. It's about a
fauna that has numerous morpho-functional adaptations to arid and psammic environments, the study of which is of great scientific interest from the point of view
eco-ethological and biogeographic. The importance of the site is emphasized by the rarity with which today there are areas of this type along the southern Sicilian coast,
the latter have in fact almost disappeared as a result of uncontrolled urbanization. What remains should therefore be carefully and scrupulously
protected to preserve, at least in part, biocoenoses and habitats that are now rare and in the process of disappearing. 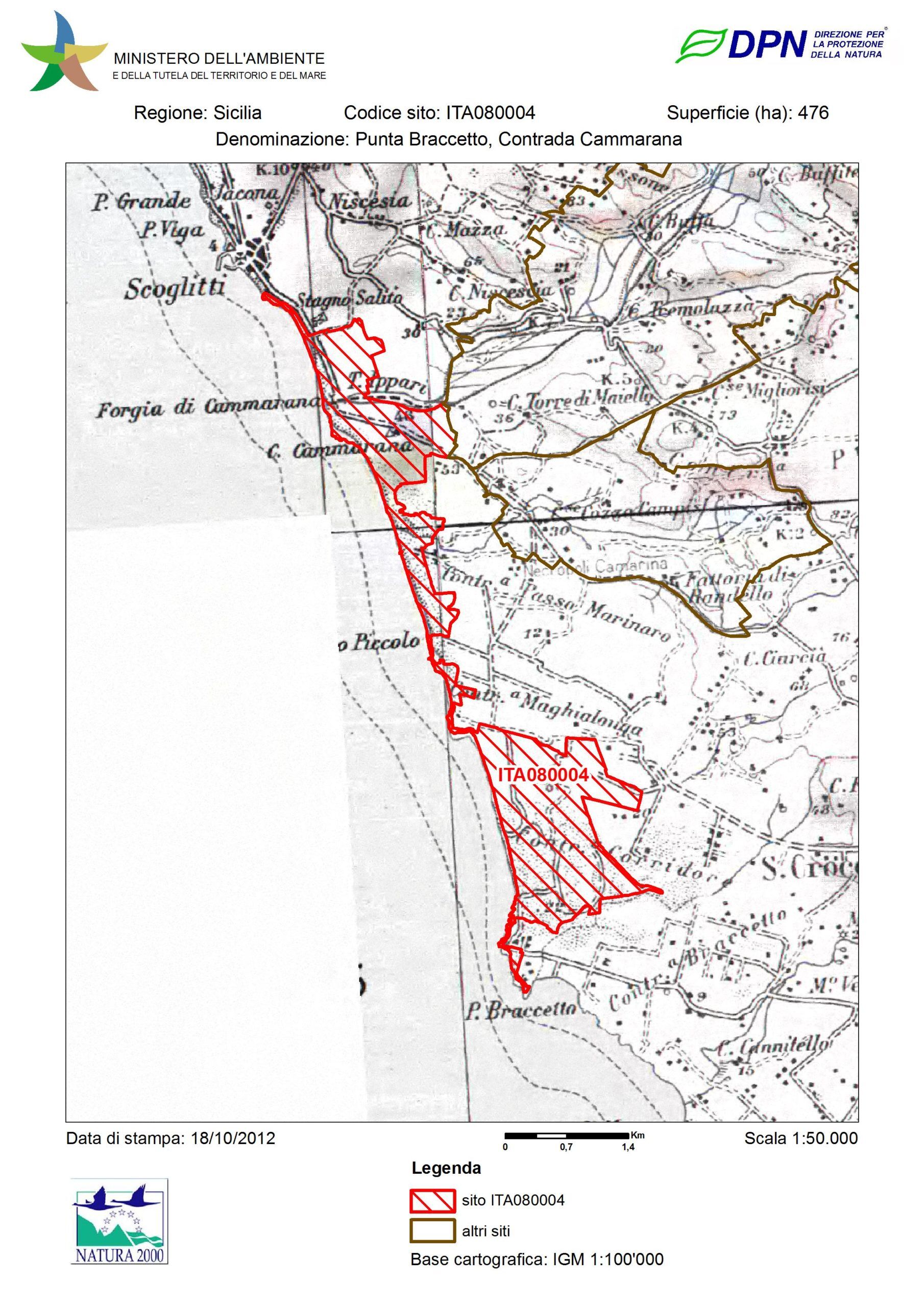 Click to see on Google Maps
Unnamed Road, Ragusa, RGVictoria, RG
Rate it (1 to 5)
2.001
Send a notice to the publisher
[contact-form-7 id="18385"]
Deactivate the Youzify Membership System to use the theme's login form here.