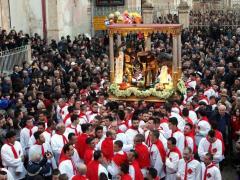 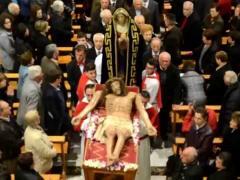 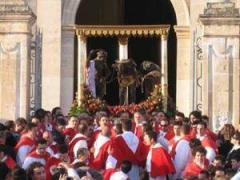 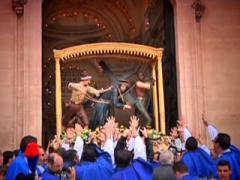 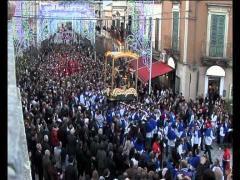 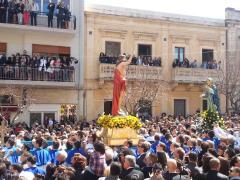 The rites of Holy week of Ispica (RG) are organized by the two main historical brotherhoods of the town, that of Santa Maria Maggiore, called dei cavari (red) and that of the Santissima Annunziata, called deinuncios[3] (light blue). The cycle of festivities opens with the last Friday of Lent and Palm Sunday, culminating in the rites of Holy Thursday, Good Friday and Easter. The manifestations, very numerous, are made up of processions and real sacred representations referring to ancient rites already practiced in the seventeenth century, which have a double value, both mystical-religious and popular, through their most salient and recognizable iconographic features.

With the last Friday of Lent at the Basilica Santissima Annunziata we enter the celebrations of the Holy Week. In the evening there is the traditional procession of the reliquary urn containing the “Holy thorn”. After having accompanied the "Santa Cascia" (Sicilian term that indicates the many relics of saints contained within the urn, including, in fact, the "Santa Spina" so called because it is part of the crown woven by the Romans and mass on the head of Christ) in the Basilica, the Living Via Crucis begins. It is a moment of true faith where the last moments of the Passion of Jesus are retraced in a real and moving way. It goes without saying that the Living Via Crucis attracts thousands of faithful or simple visitors from all the provinces every year due to its particularity and charm.

Holy Thursday, for the cavari of the basilica of Santa Maria Maggiore, begins in the middle of the night.

At 1:30 the pilgrimage of the faithful begins to the rock church of Santa Maria della Cava from where the Via Crucis starts, animated by the young people of the parish. During the journey the stations of the passion of Christ are represented and the last two, the crucifixion and the deposition of the dead Christ in the tomb, take place in the square in front of the basilica of Santa Maria Maggiore. Just after Christ's burial, at 4:00, the parish priest and the president of the archconfraternity set off towards the main entrance of the basilica where, knocking three times on the door, they start the traditional door opening, which suddenly open wide allowing the faithful to rush into the church to head towards the altar of the Most Holy Christ at the column, where it is customary to go to pray ('U Patri in Culonna), between the pungent smell of incense and the typical sound of the pipe organ that intones the notes of the funeral march dedicated to Christ. Thus began the liturgy of Holy Thursday.

In the morning around 11 the parish priest goes up to the altar of the scourged Christ, knocks three times with a key on the doors of the SS. Christ scourged who suddenly slide down. After a homily in which the priest explains the true meaning of popular devotion, the musical band begins to play the funeral march dedicated to Christ, and the simulacrum begins to slowly descend among the devotees, causing a deep emotion.

After midnight, the transuta and the traditional tours inside the basilica.

The Most Holy Christ scourged to the Column is located in the left chapel of the transept of the basilica of Santa Maria Maggiore. The statue is collected in a silvery-golden wooden machine built in 1700 and gilded several times. The base of the machine is rectangular, made of wood. The column from the base to almost half of the body is gold in color, the rest is silver, surmounted by a Corinthian-style capital. In the body of the column, a crystal medallion contains a relic of the holy cross. The naked body of the scourged Christ is girded at the waist by a golden loincloth and the head is covered by a wig gathered in two tails and made with real hair, offered by the devotees as thanks and devotion. Of the two Jews on either side, the one on the right is depicted beating Jesus on the back, while the one on the left is bent forward at Christ's height and beats him in the chest. Another wooden machine surmounts the group with static fringes and is connected to the base by four columns similar to the central one but smaller. On the head of Christ in 1899 was placed a silver nimbus embellished with stones, and commonly called paten, where the relic of the holy cross possessed by the church since 1696 is applied inside, a fragment donated to the basilica by friar G. Battista, to reciprocate the favors obtained by the marquis Don Maurizio Statella.

N. Prog. 182
Well: Holy Week
Book: REIS - Book of Celebrations, Holidays and Ritual Practices
Approval date: 03-04-2014
Category: Easter party
Province: Ragusa
Municipality: Ispica
Local denomination
Chronological News
The origins of the Holy Week in Ispica probably date back to the XNUMXth century AD, when tradition has it that a wooden crucifix was venerated in the small church of Santa Maria della Cava, which still exists today. In the wake of this story, today's simulacrum of the SS. Christ incorporates the face and the hands of that Crucifix, escaped from the iconoclastic destructions. Over time, the wooden work was combined with a group of three statues with a silvery-golden machine, by the artisan of Noto, Francesco Guarino.
Recurrence: Annual
Date:
Occasion: Death and Rebirth of Christ the Savior
Function: Celebratory / Devotional
Actors: The Clergy; the Association of Santa Maria Maggiore and the Annunziata, divided into roles for the two days of Thursday and Good Friday; the bearers of the sacred fercoli; infantrymen on horseback dressed in Roman clothes on Good Friday; the people of Ispica divided into two different factions of the gods Cavari and Nunziatari. Musical band
Participants: Local community, devotees, tourists
Technical Information
The rites of the holy week of Ispica begin on Holy Thursday. An intense preparation and ritual has committed the devotees and the Associations of Ispica since the previous month. On Thursday, inside the Basilica of Santa Maria Maggiore, for the whole morning, the evocative rite of the Descent of the Holy Crucifix from the Column takes place. The Simulacrum, an object of very ancient origin, is a center of devotion for many faithful who offer ex-votos in wax, seasonal first fruits and cash gifts, for the graces obtained.
The evening procession, in which bearers of the Confraternity of the red handkerchiefs move the simulacrum on their shoulders through the streets of the city, is preceded by a long rite inside the church itself.
Good Friday, on the other hand, is the day of Nunziatari, distinguished by the blue handkerchief. A large crowd turns their prayers and gifts to ' U Patri in Cruci, the Christ carrying the Cross. Also on this day the preparations preceding the solemn evening procession see the Confraternity of the Annunciation engaged in a ritual made up of gestures and pressing religious exhortations. The moment of great emotion is that of the meeting of the simulacrum with the crowd of people ready to accompany it along the way. The procession is charged even more with suggestion due to the presence of foot soldiers dressed in Roman clothes that precede the Christ, and reaches its climax in the moment of U 'ncontru, in which the statue of Our Lady of Sorrows Cavari meets the Son, recalling the biblical moment of the ascent to Calvary.
Two other intense processions address the crowd of the faithful on Saturday and Sunday night. On Easter night to celebrate the resurrection of Christ, the bearers run on their shoulders the simulacrum of the risen Christ, who joyfully meets the Mother still in the guise of Sorrows, at that moment replaced with clothes in the colors of jubilation.
The events of the week are framed by sumptuous lights, long lines of stalls, colorful bands and streets crowded with elegant people who change the face of the town in those days.
References
Filippone, Giorgi, edited by. 1997. Saints and sounds in the Iblei in New Ephemerides. Quarterly review of culture, Year X. n.38. Palermo: Guide.
Card Author: Ester Oddo
Click to see on Google Maps
39 Via XXV July, Ispica, RG
Rate it (1 to 5)
4.205
Send a notice to the publisher
[contact-form-7 id="18385"]
Deactivate the Youzify Membership System to use the theme's login form here.