It is a mountainous area characterized by several mountain peaks not exceeding 1200-1300 m, interspersed with deep river valleys or sometimes rivers. Geologically it is made up of metamorphic rocks with limestone outcrops. The bioclimate is between the mid-Mediterranean and the supramediterranean with ombrotype ranging from the upper subhumid to the lower humid. The natural vegetation is rather degraded and is represented by woodland formations deciduous to Quercus virgiliana or more rarely evergreen to Quercus ilex. Frequent are the aspects of substitution such as the stain with Euphorbia dendroides oa Bupleurum fruticosum, the thorny thickets, the bushes with Adenocarpus commutatus and the grasslands with Ampelodesmos mauritanicus. At the bottom of the valleys, along the streams, we often find ripisilve with plane trees and willows, as well as thickets with various species of willows. The presence is also significant, especially in the cacuminal part of Monte Scuderi of orophilic dwarf bushes formations of the Sicilian Rumici-Astragaletea rich in endemic or rare species. Frequent, even if very localized are the casmophilous formations of the Asplenietea trichomanis and those of the dripping walls of the Adiantetea.

This site represents one of the most interesting mountain areas of the Peloritani chain, both for the presence of very peculiar and rare vegetational aspects in the rest of the island, both for the localization within it of numerous endemic species or of considerable phytogeographic interest, some of which are mentioned in the list given in section 3.3 (D). A fine area of ​​the Peloritani characterized by the limestone outcrop of Monte Scuderi which hosts a peculiar flora rupicola and the deep Fiumedinisi valley with deep gorges hosting the Tiglio and numerous springs with hygrophilous pteridophytes. The area hosts a rich ed articulated vertebrate fauna which includes relatively rare species in Sicily. Of particular interest is the freshwater invertebrate fauna, rich in taxa endemic, sometimes extremely localized, and sometimes very rare. However, even the terrestrial arthropod fauna includes species of great ecological interest biogeographical, whose permanence in the site is linked to the maintenance of its ecological integrity and its high environmental heterogeneity. 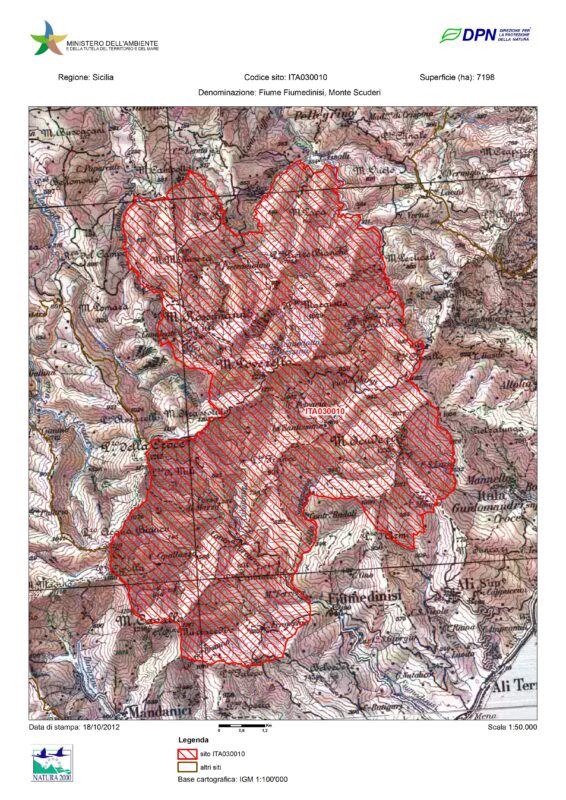 Click to see on Google Maps
Unnamed Road, Fiumedinisi, MEMandanici, ME
Rate it (1 to 5)
4.001
Send a notice to the publisher
Deactivate the Youzify Membership System to use the theme's login form here.