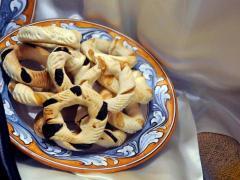 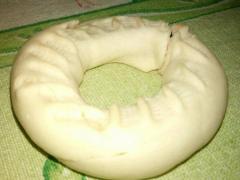 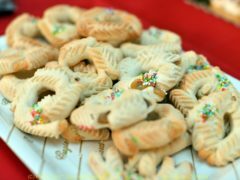 preparazione
Mix all the ingredients by adding water to taste to obtain a smooth, homogeneous and soft dough.
Leave the dough to rest overnight in a bowl sealed with plastic wrap.

Chop the almonds very finely into the cutter, add the sugar, the aromas (according to personal taste), the lemon zest, the whole egg and the egg whites, form a soft dough that does not crumble, possibly add another little egg white, finally the brandy.
Once the dough is formed, let it rest overnight.

Preparation:
Knead "la conza" (the filling) with your hands lightly greased with seed oil, and form like long snakes.
To put aside.

Divide the dough into parts.
Roll out the parts with a rolling pin first and then pass them through the drawing machine starting from the first notch, up to No. 5 with my planetary mixer, with the imperial at No. 4.
Form long strips.
Roll up the dough strips with the filling.
Cut the sections according to the type of collorella we want to make.
At this point, we will use the tweezers to make the pinches that decorate the collorella.
We have to cut the surface and create small pinches and pull them out without piercing the dough.
Preheat the oven, bake the trays at 200 ° for about 15 minutes
As soon as the base of the collorelle is golden, they are ready.
The surface must remain pale.

The collorella includes three different fillings, with only almond, with cooked wine, semolina, chopped orange peel, almonds, and again with a similar mixture with the addition of honey. Find out more recipes on our 3.0 database Recipes and Flavors of the Mediterranean