Celebrations and Rites of Holy Week in Scicli 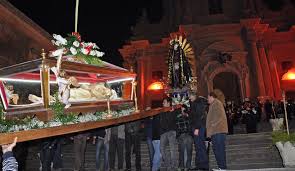 The Rites of Holy Week

The week preceding Easter is marked by various processions and celebrations.
The afternoon of Palm Sunday, the simulacrum of the A.ddolorata of Santa Maria la Nova, still today at the center of the veneration of all citizens, è linked to an ancient cult that dates back to S. Guglielmo.
A large crowd of faithful, in a double row, silent, in an attitude of prayer, carrying lighted torches with a bridle paper collar, to protect the flame, follows The pity; the statuary group is made up of a wooden sculpture, the Madonna, lying down, with her head bent, her hair falling down on her chest, with a floral dress, a golden shirt and a blue damask cloak that supports the deposed Christ on her knees; flanked by two pious women, standing upright and, next to it, a wooden cross covered with silver sheets. At one time, and up to the middle of the last century, it was not uncommon to see some penitents, the naked torso, under an abracian coat, the head encircled by a thorny twig, proceeding clapping their shoulders, in rhythm, with a donut of rope canape". (B. Cataudella, "Scicli. History and Traditions").

Il Holy Tuesday is the processionand of the Addolorata di S.bartolomeo, "Lu veru Cravaniu", a rite introduced more recently, as if to underline the rivalry between the two Confraternities.

The "function" of the Holy thursday, with the setting up, in the chapels of the various churches, of the "Saburcara", the Sepulchres, which must be visited, as tradition dictates, in an odd number. The older ones remember that once the two simulacra, the Jesus at the column and the Jesus at the "tympone", were transported, in noisy raids, one up to Balata, the other up to Calvary, under the Convent of Cross; the party then continued also during the night, “… with a silent procession, in an atmosphere of sadness, which was fitting for a rite of Passion, during which the Dies ira, dies illa was sung”. (B. Cataudella, op.cit.)

Very suggestive is the evening of Good Friday, when a beautiful simulacrum of Our Lady of Sorrows is carried in procession, called "of the Hospital " because it was already kept and venerated in the demolished church of the hospital.

Dressed in the traditional black dress and a sword that pierces her chest, she was also called Madonna of the craftsmen, as once the city workers took turns at the poles.

This Madonna, currently venerated in the church of San Giovanni, attracts a continuous flow of faithful in which it ignites feelings of authentic religious piety, testified by the numerous associations that operate and spread the Marian cult in her name.

The procession begins, in fact, from the church of San Giovanni and, in an atmosphere of great meditation, goes towards the church of Santa M. la Nova where other faithful are already waiting with the ferculo of the "Dead Christ", kept inside a glass case that is placed at the head of the procession; to follow, the statue of "Christ at Calvary and the Jews" it's a "Here Homo "; composed like this, the procession, between songs and prayers, runs through the main streets of the city, until late.

From this moment on the city seems to live with bated breath, in religious silence, the arrival of Saturday when, at midnight, with the function of the "Scisa a Cruci" , "Snap", (melt) the bells, after the long silence that lasts from Holy Thursday and, in a festive competition, the bells of the Matrix ring out, then, in order, thunders, in the valley, the bell of the church of San Bartolomeo and, lastly those of Santa M. la Nova quiet down, because the Easter rite belongs to her, so here it is celebrated with greater solemnity.
It is here that throngs of young people eagerly await the end of the Holy Saturday service and together with a crowd overflowing from each aisle of the church welcome, among the cheers of exultation, the statue of the Risen Christ, to the cry of "Joy".
The whole Sciclitan community lives the spirit of contrition that emanates from the Mysteries contemplated in the celebrations and functions of Holy Week, awaiting the Rebirth prefigured by the Risen Christ, the "Uomu Vivu" that all Sciclitans, and not only, are preparing to celebrate from the early morning of Easter Day.
It is the "religiosity" of the entire community, in its multiform structure, which emanates from the long and participatory processions, without hiding or ignoring, the spirit of "belonging" to this or that parish or brotherhood.
This too (and more) is History, Folklore and Tradition, therefore all the manifestations, each in its specificity, deserve to be valued and "assumed" in the socio-cultural life of the city community.
With this motivation the Region of Sicily intended to welcome,”The rites of the week Santa in Scicli " among the Great Events, and inscribe the event so called in the REI, the Register of Intangible Heritage.

Buttitta, Ignazio Emanuele. 2002. The long memory: symbols and rites of traditional religiosity.Rome: Meltemi Editore.
Cataudella, Bartolo. 1970. Scicli: history and tradition. Scicli: printed by the Municipality.
Croce, Marcella. 2004. The seasons of the sacred: almanac of Sicilian folk festivals.Palermo: Flaccovio Editore.
Buttitta, Ignazio Emanuele, edited by. Holy Week in south-eastern Sicily, Disco 2. Syracuse: produced by the Sicilian Region - Regional Department of the BB.CC.AA. and of the PI, Casa Museo “A. Bird ", Superintendence for BB.CC.AA. of Syracuse, Folkstudio of Palermo, 2005. DVD, 11 min.
Author Profile: Maria Rosaria Paterno '
Information on geolocation and the route to reach the place
View the place with Street View (if any). Relevant only if referring to tangible assets with associated address.
Location
Send a notice to the publisher
[contact-form-7 id="18385"]