1.2.2 Art in the Paleolithic and Mesolithic 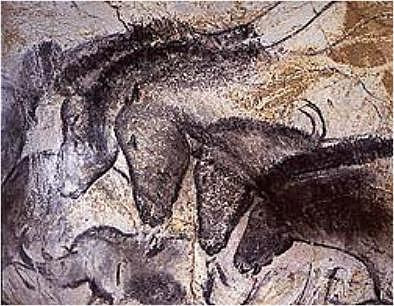 Parallel to the birth of religious sentiment, man also has the ability to represent in a graphic (rock art) and three-dimensional (furniture art) way some aspects of the reality that surrounds him or that he would like to be realized. It is conceivable that the art that was born in the Paleolithic is not the art of "beauty" but the art of "functional" as more than motivated by aesthetic needs it is dictated by the hope to engrave in a magical way, through propitiatory rites, on everyday reality. In this sense, the use of some caves full of wall figures that were probably used as religious sanctuaries in which religious rituals were officiated, for example to propitiate hunting or to try to neutralize adverse natural events, should perhaps be framed. 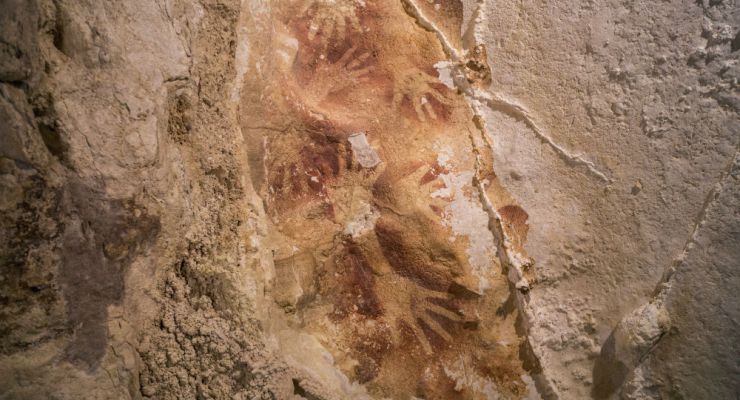 Prehistoric Caves of the Island of Maros, Indonesia 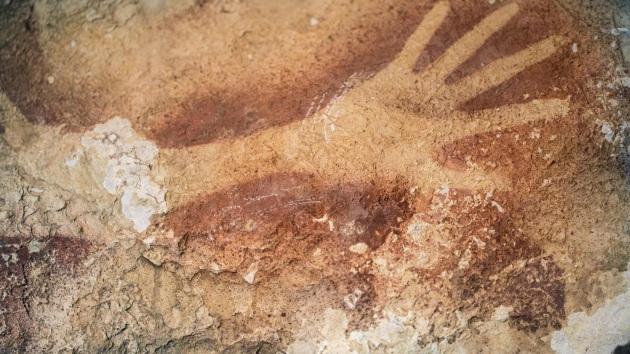 Rock art is manifested through engravings or paintings performed on the internal walls of natural caves, the objects engraved or drawn on the walls often refer to magical rituals and are mainly made up of animals (bison, bulls, horses, mammoths, fish) and rarely by human figures.

The oldest rock art discovered so far (February 2018) is that of the prehistoric caves of caves of La Pasiega, Spain, where rock paintings of 65.000 years ago were found, at least 20.000 years before the arrival of the Sapiens from Africa to Europe and is the work of the Neanderthals, testifying that art was born even before Homo Sapiens (see the recent article on The Republic) See also: http://science.sciencemag.org/content/359/6378/852 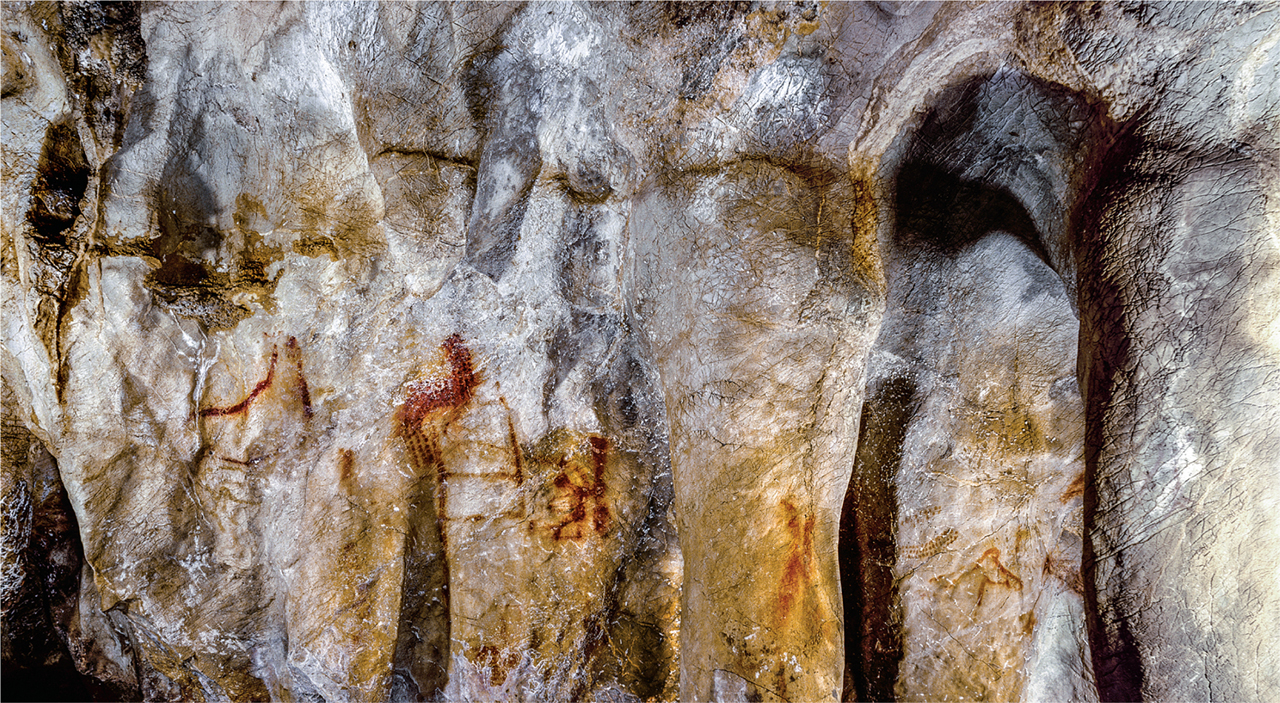 The cave art previously discovered in 2018 considered to be the oldest was that of prehistoric caves Maros karst, Indonesia, described in a study published in Nature (October 2014) and dating back about 40 thousand years, the discovery, made in the cave of Maros, on the island of Sulawesi, overturns the theory that he wanted the Chauvet Cave to provide the most ancient evidence of parietal art, as well as various “Stencil” of hands, even the portrait of animals, which could represent the oldest example of figurative art in the world.

Until a few years ago the most ancient rock art was considered that of Chauvet cave in the Ardèche region of France. The discovery took place on December 25, 1994 by the speologist Jean Marie Chauvet who was lucky enough to go down in history by giving the site its name. The cave includes several galleries containing over three hundred paintings and engravings some of excellent quality depicting rhinos, horses, bears, elephants, buffaloes, reindeer, leopards and hyenas. Some analyzes carried out on the drawings depicting rhinos trace the paintings back to a period between 30.340 and 32.410 years ago. [1] 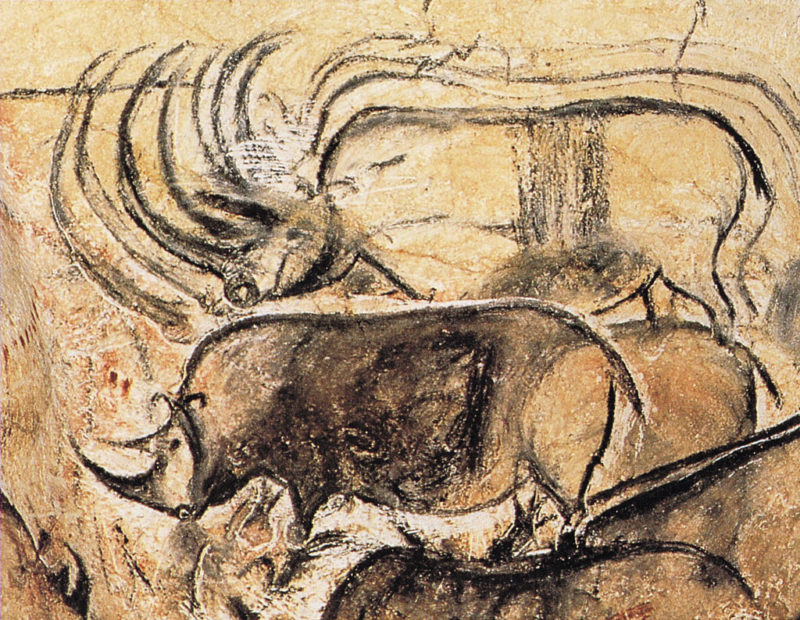 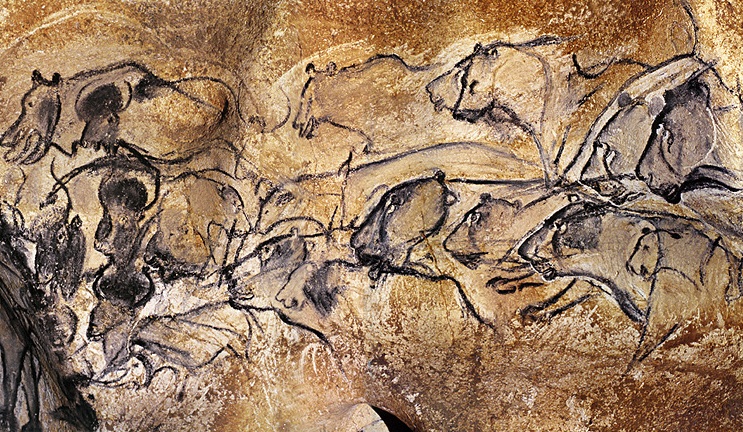 Other significant examples of rock art in Europe are found in France (the great oval room of the  Lascaux cave near Montignac, in the Dordogne) 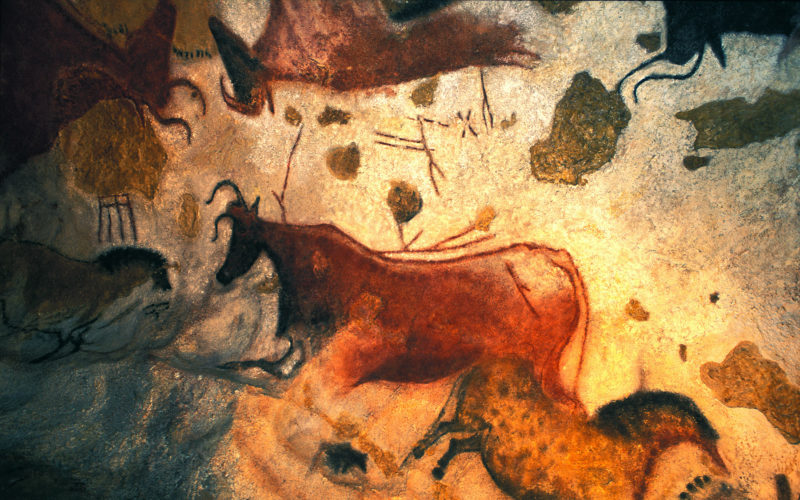 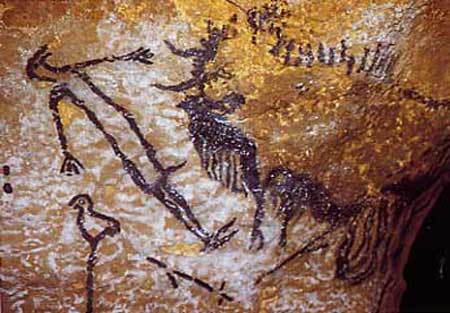 and in Spain (room of the painted bulls of the Altamira cave in Santillana del Mar). 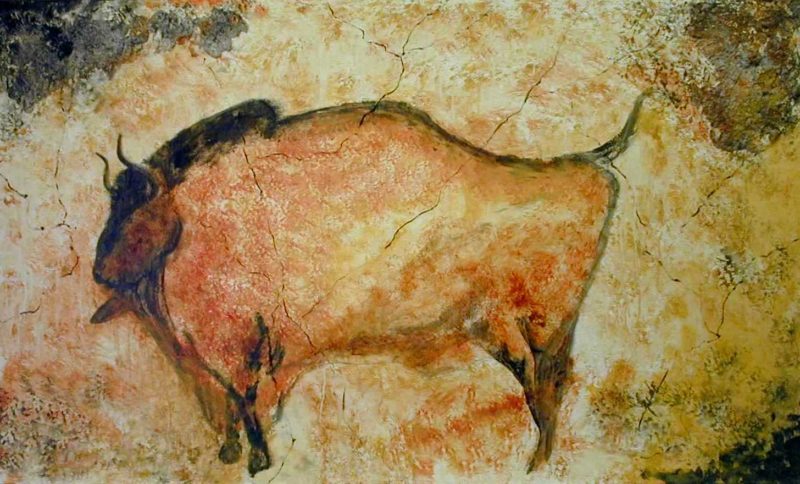 The most ancient figurative art so far discovered in Sicily is that of Genoese cave, (Levanzo island), discovered in 1950 and where graffiti and paintings appear, the engravings represent 29 animals (mainly ox horses and deer) and, which is rare in paleolithic wall art, also of human figures. Some of the human figures have the head of a bird, while others are presented with legs apart or in the shape of a violin [2]. 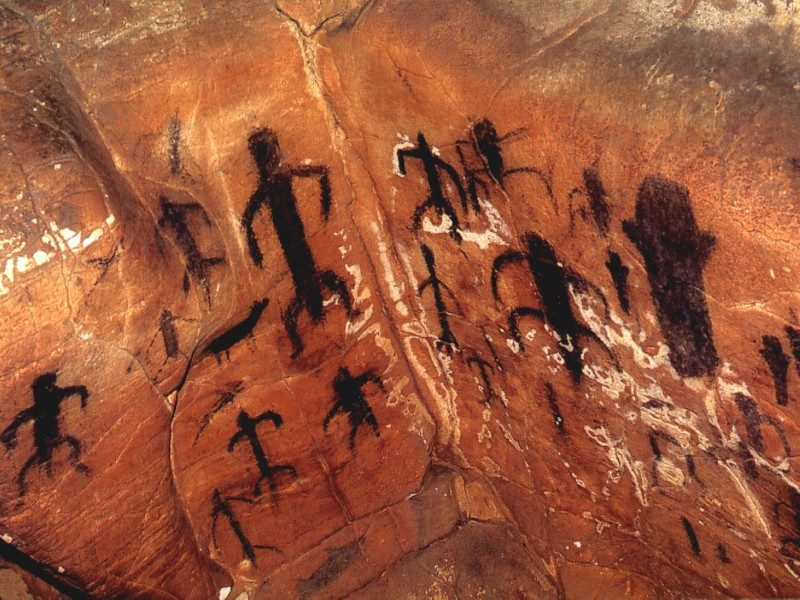 Nella Grotta dell'Addaura There is an example, considered exceptional, of a scene, in which a dozen male characters surround two men lying on the ground, in addition to human figures there are figures of animals. The figures of Addaura probably make up an initiation scene perhaps of a religious nature. Some of the objects found in this cave as well as those taken from the cave of the Genoese are currently in the regional museum of Palermo. 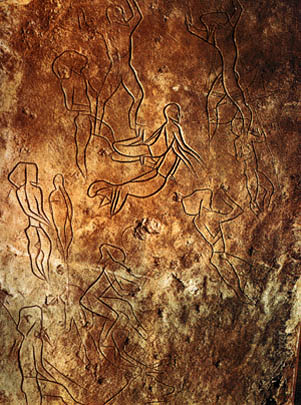 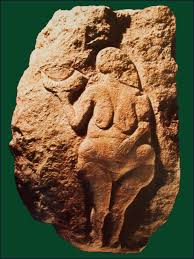 The furniture art of the Paleolithic is mainly characterized by sculptures, almost always of small size. Widespread were the female statuettes known by the name of Prehistoric Venuses found in many areas of Europe and even in Siberia (near Lake Baikal). Of particular artistic interest are some of the Venuses found in France (Venus of Laussel, Venus of Lespugue), in Austria (Venus of Willendorf) and in Italy near Modena (Venus of Savignano). 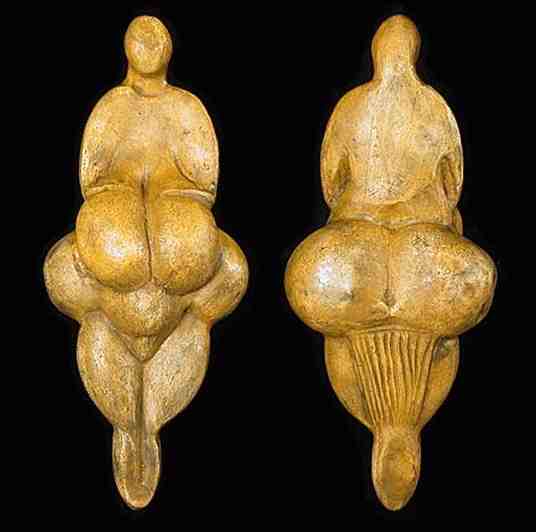 The common characteristic of many prehistoric Venuses is the exaggerated accentuation of some female attributes (breasts, vulvas, belly, buttocks, indicating the points connected in some way to the ability to procreate), and the almost lack, at times total, of other attributes such as the arms, hands, face and feet. The opulent forms of these statuettes suggest they were used as symbols of fertility and abundance; in some cases probably related to female deities referable to the concept of Mother Goddess. 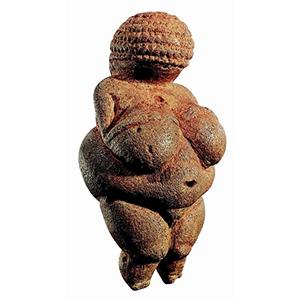 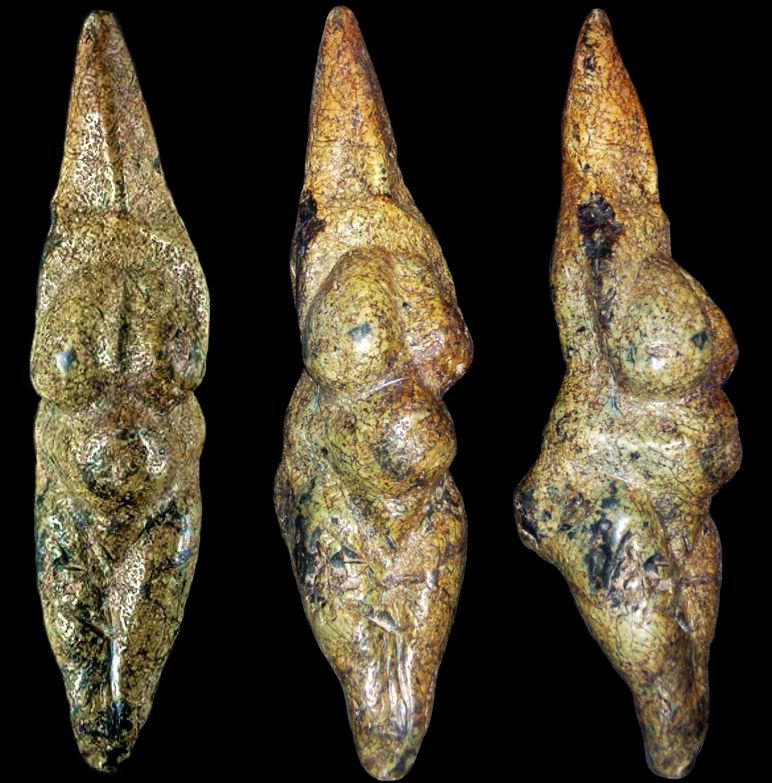 In the Genovesi cave of Levanzo, in addition to a stone on which a figure of a bovid and two pebbles painted in red is engraved, two female statuettes were found that could be referred to prehistoric Venuses in the style.

[1] Data reported on the Internet at the following address:  http://www.culture.fr/culture/arcnat/chauvet/en/gvpda-d.htm (new address:http://www.culture.gouv.fr/culture/arcnat/chauvet/en/) It is interesting to note that exactly one month after the discovery, the news was available on the Internet, accompanied by illustrations and some descriptions of the site. 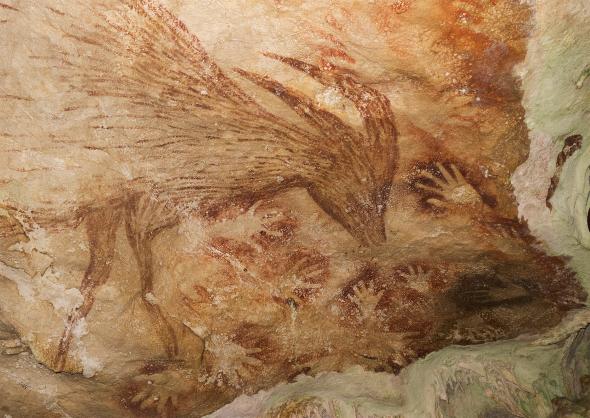