History of Sicily
1 THE FIRST INHABITANTS OF THE ISLAND
1.2.1: Religious sentiments and burials in the Paleolithic and Mesolithic

It is probably in the Paleolithic that theHomo Erectus he begins to appropriate psychic manifestations such as to justify for him also the appellation of Homo Religiosus.  The first funeral rites and figurative art are born, then religious life is born. Religious sentiments in themselves do not leave fossil traces, in these cases the study of the most ancient parietal arts and, even more so, that of the burials of ancient prehistoric populations, helps to understand if we are in the presence of probable religious sentiments, especially when in the burials there are traces of particular rituals and grave goods.

In Qafzeh (Israel) a burial of about one hundred thousand years ago was found which shows clear signs of offerings to the dead; in fact, at the time of the burial, offerings were placed on the hands of the deceased and the palms of the buried person were purposely turned upwards to receive the offerings [1]. In Italy, among the most ancient burials in which traces of funeral rites can be identified, those of the Cave of the Children at Balzi Rossi in Liguria. On the site, the skeletons of an elderly woman and a child were found, laid in a crouched position. The young man's head was protected and bore traces of a hat made of shells, the woman had a small flat stone on her head and two shell bracelets on her wrists. Traces of red ocher were present on both skeletons [2]. In Sicily there are traces of funeral rites in the four ocher-covered burials [3], found in the Cave of San Teodoro near San Fratello (Messina). All this leads us to think that theHomo Religiosus he was already present in the Paleolithic, he had become aware of death and tried to overcome it, believing that something of himself (the soul or something similar) remained even after death.

The Paleolithic therefore marks the beginning of the first forms of religious thought, what will be called religion natural,

with this term we mean that category of religions whose characteristic was a divine animation of the various phenomena of nature such as meteorological phenomena (rain, thunder, lightning), aspects related to human life (birth, death) but also aspects related to the world animal. It is precisely to the animal world that the first phase of natural religion refers, the so-called phase totemistics [4], in which a link is identified between the clan and the Totem, generally an animal, to which the group owed the sustenance, but also objects considered sacred.

Totemism can be considered the most ancient form of religion in the history of man [5]; it was followed by a phase (primitive animism) in which the real naturist element was affirmed, where there was an animation of natural phenomena and human life.

Paleolithic man practiced ritual cannibalism, at least as the human remains found among those of other animals in the Cave of Hortus, north of Montpellier in France [6]. It is still too early to talk about real human sacrifices, it is likely that on occasions of battles between groups the winners ate the losers in order to steal the energies of the victims.

Among the aspects of nature that has most influenced religious sentiments of all times is probably that of motherhood. Hence, a symbolism linked to the concepts of birth and death soon had to be born, strongly linked to the same concept of fertility both of the earth and of the woman. The woman and the earth, through the repetition of the life cycle: from birth to death and then again to birth, allow the renewal of

life. These concepts will translate into the cult of Mother goddess which will soon spread in many forms. The symbolism linked to the mother goddess is therefore linked to that of nature, depending on the aspects that are highlighted this type of female cult will translate into different symbolisms, so here we are sometimes faced with the cult of the Goddess of fertility ( linked to the generating forces of nature), the goddess of Death (linked to the destructive forces of nature), the Bird Goddess, the latter, would have a dualistic nature: dispenser of life, wealth and nourishment but also of death. [7]

The first manifestations of the cult of Mother goddess they are traced back to the lower Paleolithic, when the oldest flint sculptures of female figures date back to more than 500.000 years ago. [8]

In the concept of "mother goddess", seen as a female symbol of fertility, it was present at the time of the middle upper Paleolithic (28-18 thousand years ago)[X], therefore, long before classical antiquity. Starting from the Neolithic period (8000-4000 years ago), with the transformation of the communities into an agricultural character, women saw their social weight increase and some aspects of matriarchy began to assert themselves within society. The goddess of fertility also began to become the goddess of agriculture, protector of crops and fields. ([X] JF Kozlowski: Religiousness in prehistory. p.67. 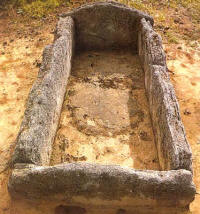 At that time those who had sold coffins would not have made great deals, the Paleolithic and Mesolithic burial often took place in natural caves in ditches often dug directly on the ground, called "earthen tomb" (Molara cave in Palermo) [9], sometimes covered with lithic slabs and covered with the same stones, called "slab tomb".

A particularly significant example of a slab tomb is given by the remains found in the Grotta dell'Uzzo in the province of Trapani, where what could be defined as one of the largest Mesolithic necropolises in the Mediterranean basin was found, represented by ten burials, all in pit, with various methods of deposition [10]. [1] Bernard Vandermeersh: The oldest burials. In "Religiousness in Prehistory". p.50

[3] The red color, obtained from ocher, easily found in nature, was frequent in cultic practices

[4] The word Totem is the shortened form of the word ototeman and derives from the dialect of the Ojibwa Indians of North America. The term Totemism indicates the religious cult of the Totem.

[7] Marija Gimbutas: The religion of the goddess in prehistoric Europe. In "Religiousness in Prehistory". p.96

[8] Marija Gimbutas: The religion of the goddess in prehistoric Europe. In "Religiousness in Prehistory". p.87

[9] Giovanni Mannino: For the study of the prehistoric necropolis of the province of Palermo. In First Sicily pag. 306.