History of Sicily
1 THE FIRST INHABITANTS OF THE ISLAND
1.2 Paleolithic and Mesolithic

According to chronological estimates, the separation between the ancestor of man and that of the chimpanzee would have taken place between ten and 4,5 million years ago. Traces of the first hominids are found in Ethiopia, remains of a Australopithecus (Australopithecus ramidus) were found in 1994 at Aramis in the Awash Valley of Ethiopia and have been dated 4,4 million years. In the past, the oldest remains were those known as "Lucy's skeleton" found in East Africa in 1974 and dated 3,2 million years. The Australopithecines, at least those who lived between two and three million years ago, walked upright and were able to chip stones, this is confirmed by the discovery of lithic tools dated between 2,6 and 2,4 million years in certain Ethiopian sites of Kada Gona and Kada Hadar near the Awash Valley[1] [b]. The indications that come from these findings undermine the principle that it was Homo habilis the first hominid to know how to use his hands; in fact, the latter appeared about 1,9 million years ago. (and for a time cohabited with the Australopithecines). About 1,8 million years ago another hominid appeared, Homo erectus o Homo ergaster he perfects the art of chipping stones, in fact the first "double-sided" appear (1,2 million years ago) and discovers the use of fire (500.000 - 400.000 years ago). Traces of Homo Erectus occur not only in Africa but also in Europe, the Near East and China. In France in the Chilhac, in the Massif Central, C. Guth found some elaborate pebbles that testify to a human presence in France dating back to at least 1.5 million years ago[2]

Until a few years it was common opinion that the appearance ofHomo Sapiens had occurred about 200.000 years ago, thanks to the discovery of a sapiens found in Omo Kibish, in Ethiopia[3], but the 2017 discovery, reported in the online magazine www.nature.com[4] of remains of a Homo Sapiens in the archaeological site of Jebel irhoud (Morocco), which has been attributed 300-350.000 years of age, would not only move the presence of Homo Sapiens back in time but would identify North Africa as the probable cradle of Humanity in place of the ancient thesis that wanted it in East Africa.

About 130.000 years ago theHomo sapiens, with the disappearance of man sapiens about 34.000 ago, Homo sapiens remained the only race from which we all descend.

Therefore, if it is true that the first hominids can be traced back to a period ranging from 10 to 4,5 million years ago, it is possible to hypothesize that the first migratory flows began early, compatibly with the climate and the surrounding environment which, as we know, it has varied a lot over the past millions of years. For example, there are theories that indicate a drying up of the Mediterranean which occurred about six million years ago[5]. 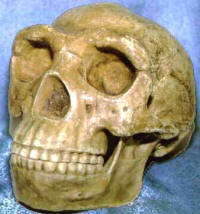 Most scholars agree with the belief that mankind arrived in Sicily through the Africa -> Asia -> Europe -> Sicily trajectory. But if, based on what has been said, we hypothesize the presence of African hominids 5 or six million years ago, and if the Mediterranean sea did not exist, it might not be so risky, (even if not scientifically proven) to think that between 3 and 6 million years ago (year plus year less), a group of those who today call African immigrants, decided to make a visit to our part, they had no particular difficulty in crossing the sea, precisely because it did not exist then, so they did. walking; upon arrival they found no one to ask them for a residence permit as there was no one who could do it, since mankind came precisely from Africa.

Traces of those first inhabitants were found a few years ago near Agrigento[6] , the discovery could be seen as a further element in favor of the idea that mankind, even if in the form of the first hominids, did not follow the Africa -> Asia -> Europe -> Sicily trajectory but would radiate from Africa directly in Sicily. The theory is actually not that new, many writers of the past, including the Ragusan Raffaele Solarino[7], had accepted the idea that the first Sicilian man came directly from Africa.

The other more ancient remains also come from the Agrigento area: in fact they belong to the lower paleolithic (2.500.000 - 100.000 BC) the artifacts found in Capo Rossello near Realmonte (pebbles chipped at one end on one face or on two faces) and those found in a rock shelter in the Valley of the Platani at Cammarata. Other traces of human presence in the lower Paleolithic have been found in the province of Catania along the rivers Dittaino e simeto and Ancient Noto.

An important site considered among the oldest of the upper Paleolithic (about 25.000 BC) is that of New Fountain, a town a few kilometers from Marina di Ragusa, the site is a shelter under the rock and until not many years ago it was considered the oldest Paleolithic station in Sicily[8]. Further traces that show that the Upper Paleolithic Homo was present in the Ragusa area, have been found in the Modica in Contrada Vignazza and in Lazarus cave a natural cave located in the Cava Lazzaro or Cava grande between Modica and Rosolini, flint arrowheads, obsidian and flint knives and several bone awls were found in both sites[9].

Each of us can say that we have had its ups and downs, the same thing is true for the sea, whose level has undergone several changes over the millennia. In the Paleolithic the great-grandchildren of the first inhabitants of Sicily who wanted to return to the African land using the mainland could not have done so since, in the meantime, the conditions had arisen to be able to affirm that "between saying and doing there is the sea is in the middle ”. Towards the end of the Middle Paleolithic the sea level was not very different from the current one, about fifteen meters lower, but then over the millennia it tended to drop until it reached 24.000 meters below the current level about 120 years ago.[10], this led the Sicilian and Tunisian coasts to be divided by a distance of 20 or thirty kilometers, few for today's boats, a lot for swimming. 12.000 years ago the sea level had risen to -47 meters compared to the current level, so much so that the islands of Levanzo and Favignana were joined to Sicily to form a single large promontory.

When the Paleolithics were hungry they did not go shopping to the nearest supermarket but armed themselves with bows, axes and spears which they generally built with branches at the ends of which they fixed spikes made of chipped flint, and went hunting. Oxen, horses, donkeys, wild boars, deer, foxes and wild cats were the preferred prey. It is probable that the Sicilian Paleolithic also hunted other animals then present in our territory: hippos, bison, bears, hyenas, lions and elephants. For the latter perhaps they made less effort than one might think today since they were small, indeed dwarfs, being on average under one meter in height. In fact, it is possible to say that the smallest elephant that lived on earth lived on our island about 500.000 years ago (A fully reconstructed example of a dwarf elephant can be found at the Museum of the Institute of Paleoecology in Catania). On the other hand, those who had a fine palate and preferred fish to meat, had molluscs and crustaceans available in abundance, as well as groupers, moray eels, gray tortoises and whatever else could offer a sea not yet plundered and polluted as unfortunately that of our times.

At one point some paleolithic smarter than the others (or perhaps more toothless), tired of eating raw meat, decided it was time for a nice grilled steak, then discovered the way to light the fire, the first hearths in Europe and in Asia are traced back to about 400.000 years ago, of some interest is the encampment found at Terra Amata near Nice in France[11]

Unlike many of their descendants who will have the opposite fate, the Palaeolithic people had the compote but not the bread; in fact, they did not yet know agriculture but practiced the harvesting of vegetables as Mother Nature offered them (there is evidence of the production of unleavened bread in Mesopotamia around 7000 BC). The first to taste leavened bread were perhaps the Egyptians in 2000 BC who built the domed oven for baking bread.

They lived in modest but spacious and above all airy houses, very airy, in fact they were mainly caves or sheltered sites such as that of Addaura and Fontana Nuova. Sometimes several people gathered, in a non-sedentary way, in camps, that is, in temporary settlements, the characteristic of which was the instability of the settlement (stable settlements are not known in this remote era).

The Paleolithics did not have a great deal of tools at their disposal, they had learned to work the stone by chipping it with other harder stones in order to obtain chipped pebbles on one side or on two faces, these tools, of various sizes, were used to grind bones and other material, to hunt and, if necessary, to defend themselves. The material used was mainly: limestone, quartzite, flint and animal bones. 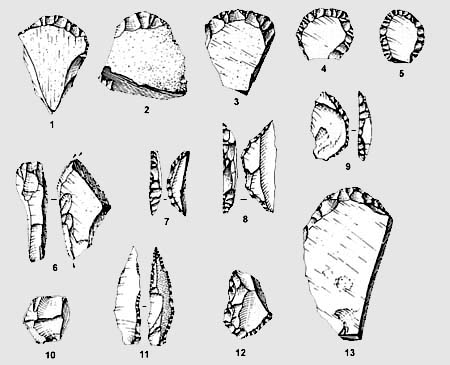