History of Sicily
3.1 The Greeks - 3.1.4 The Siceliots or Greeks of Sicily

Among the cities founded or in any case colonized by the Greeks we have:

Selinunte, founded by the Megaresi a century after the foundation of Megara Iblea.

Gela founded by settlers from Rhodes and Crete (690 BC) Agrigento (582 BC) was instead a subcolony of Gela.

According to the historian Thucydides (lib. VI.2) Akray located near Palazzolo Acreide, was a subcolony founded by Syracuse in 664 BC. Archaeological excavations seem to confirm the presence of Greek colonists starting from the XNUMXth century BC, but the material returned is much older, even belonging to the Upper Palaeolithic. A necropolis with cave tombs from the late Bronze Age was also found.

Another Syracusan subcolony is Casmena, founded by the Syracusans around 644 BC The city had been identified in the past with various locations including Scicli and Comiso. The archaeological finds that took place between 1922 and 1931 now suggest that the right site is that of Monte Casale, an isolated plateau at 830 m. above sea level 12 km west of Palazzolo Acreide.

Another Greek colony was Camarina, not far from the mouth of the Ippari river, which the Solarino defines as Phoenician. The city was colonized by Syracuse in 589 BC, at the head of the colony were Dascone e Menecolo. after the explorations of Paolo Orsi, the excavations resumed in 1958 and have brought to light numerous remains including many Greek and Phoenician amphorae.

The city of Camarina extended over three hills, the two minor ones today called Eracle e di casa Lauretta and the main one Cammarana. A swamp surrounded the city starting from the east[1].

And speaking of what was called "Lacus Camarinensis" also mentioned by Virgil[2], it is said that during a period of great drought the plague struck the city, the inhabitants believed that the swamp somehow favored the calamity, they consulted the oracle of Apollo if it was necessary to drain it. The oracle replied that this should not be done, but the inhabitants wanted to carry out the drainage work all the same, the plague ended but shortly after the invasion of the enemy facilitated by the absence of the ancient natural barrier, it made the inhabitants regret bitterly of not having accepted the advice of the oracle.

There were other subcolonies Callipoli ed Euboea, the first was a subcolony of Naxos of uncertain location and destroyed in 495 BC by the tyrant of Gela Hippocrates[3]. The second was a subcolony of Lentini and the site of this city was not to be very far from Lentini itself.

Soon the Greek expansion was such that a large part of Sicily was under the control of the Greeks, the indigenous people were not always expelled from the place where they lived, sometimes the Greeks limited themselves to positioning themselves in the vicinity of an indigenous settlement maintaining more whether or not they are friendly with the inhabitants, this is partly demonstrated by the presence of Greek necropolises close to remaining indigenous settlements. This was perhaps the case of Ragusa, where a Greek necropolis was found outside the town of what was perhaps the ancient Ibla Herea. Sometimes there was a fusion, if not total, at least partial, of the two cultures, resulting in what they were then called Sicelioti or Greeks of Sicily, even if, between the two cultures it was undoubtedly the Greek one to prevail.

The Greek presence led in many parts to a gradual Hellenization of the occupied territories, with the introduction of the political system of the 'polis' that is city-state with part of the annexed territory, which often rivaled each other. Where Hellenization encountered greater resistance was instead in western Sicily occupied by Elimi and Sicani who instead favored relations with the Phoenicians-Punics. 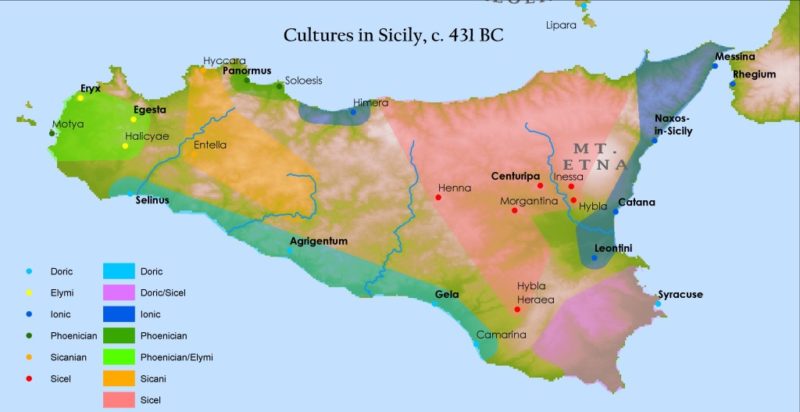