Natura 2000 is the name that the Council of Ministers of the European Union has assigned to a coordinated and coherent system ("network") of areas intended for the conservation of biological diversity present in the territory of the Union itself. The establishment of the Natura 2000 network is provided for by the Directive n. 92/43 / EEC

of the Council of 21 May 1992 concerning the"Conservation of natural and semi-natural habitats and of wild flora and fauna", commonly known as the "Habitat" Directive. However, the objective of the Directive is broader than just the creation of the network, having as its declared purpose to contribute to safeguarding biodiversity through conservation activities not only within the areas that make up the Natura 2000 network but also with measures for the direct protection of species whose conservation is considered a common interest of the whole Union.

The implementation of the Directive took place in Italy in 1997 through the Regulation DPR 8 September 1997 n. 357

modified and supplemented by Presidential Decree 120 of 12 March 2003

. The conservation of European biodiversity is achieved taking into account economic, social and cultural needs, as well as regional and local particularities. In other words, the aim is to promote the integration of the protection of habitats and animal and plant species with the economic activities and with the social and cultural needs of the populations living within the areas that are part of the Natura 2000 network.

According to the criteria established by Annex III of the "Habitats" Directive, each Member State draws up a list of sites hosting natural and semi-natural habitats and wild animal and plant species, based on these lists and in agreement with the Member States, Commission adopts a list of Sites of Community Importance (SIC).

The Natura 2000 Network, pursuant to the "Habitat" Directive (Article 3), consists of:

(Birds Directive) asked the Member States of the European Union to designate SPAs, i.e. territories suitable for the number, extent and / or geographical location for the conservation of the threatened, vulnerable or rare bird species mentioned in Annex I of the Directive. BirdLife International's “Important Bird Areas” (IBA) project serves as a reference for establishing SPAs. The areas chosen are places of reproduction, feeding or migration and are therefore considered particularly important for the conservation of birds. The designation of SPAs is relatively simple and is done at national level without dialogue with the European Commission. In Italy, the identification of SPAs is the responsibility of the Regions and Autonomous Provinces, which transmit the data to the Ministry for the Environment and for the Protection of the Territory and the Sea; the Ministry, after verifying the completeness and congruence of the information acquired, transmits the data to the European Commission (Standard forms plus cartography). The SPAs are intended as designated from the date of transmission to the Commission and the updated list of SPAs is published on the Ministry's website. See the full list

The Special Areas of Conservation aim at the conservation of these ecological sites:

The procedure for designating a site as a SAC is longer than that for SPAs. Each state proceeds by making an inventory of the potential sites on its territory and then proposing them to the European Commission in the form of pSIC (proposal for a Site of Community Interest). After approval by the European Commission, the pSIC is entered as Site of Community Interest for the European Union (SIC) and integrated into the Natura 2000 network. As quickly as possible and within a maximum period of six years from the selection of a site as a Site of Community Importance, the Member State concerned designates the site in question as a Special Conservation Area ( SAC). So all the Sites A natural site can also belong to more types in this case a further classification given is:

In Italy, in 1995 the Ministry of the Environment launched the “Bioitaly” project with the aim of acknowledging and implementing the “Habitat” and “Birds” Directives. the Bioitaly project led to the identification of two other types of areas: Sites of National Importance (SIN) and the Sites of Regional Importance (SIR). These additional areas (SIN and SIR) are not connected to the implementation of the Habitats Directive but constitute a deepening of the cognitive framework at the regional level, regulated by specific regulations. To date, (2018) 2332 Sites of Community Importance (SCI) have been identified by the Italian Regions, 1889 of which have been designated as Special Conservation Areas (SACs), and 612 Special Protection Areas (SPAs); of these, 335 are type C sites, or SCIs / SACs coinciding with SPAs. A total of 2000 habitats, 131 flora species and 90 fauna species (of which 112 mammals, 22 reptiles, 10 amphibians, 16 fish, 26 invertebrates) are protected within the Natura 38 sites in Italy under the Habitats Directive; about 380 species of avifauna under the Birds Directive. The following table shows, for each Region, the number, the total extension in hectares and the percentage with respect to the total regional territory on land and sea, respectively of the SPAs, SIC-SACs, and type C sites (SIC-SACs coinciding with SPA).

* Since the IT1201000 site falls partly in Piedmont and partly in the Aosta Valley, the calculation of the surfaces was carried out by attributing to each Region the part of the site actually falling within its own territory.

/ Regions that have no territory at sea

The following are the overall data of Natura 2000 sites for each Region (number, total extension in hectares and percentage on land and sea) excluding any overlaps. 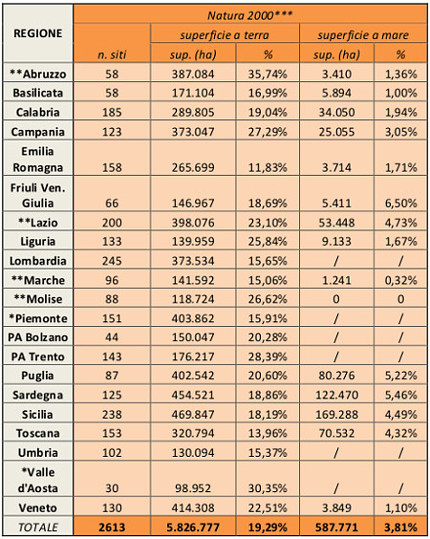 * Since the IT1201000 site falls partly in Piedmont and partly in the Aosta Valley, the calculation of the surfaces was carried out by attributing to each Region the part of the site actually falling within its own territory.

*** Number and extension of Natura 2000 sites by Region was calculated excluding the overlaps between SCI-SACs and SPAs.

/ Regions that have no territory at sea

Annexes to the Environment Directive: