The Register of Intangible Heritage of Sicily (REIS)

The Register of Intangible Heritage of Sicily (REIS), was born with the The DA 571 of 5 March 2014 following the review of the previous REI register that was born with a previous Councilorial Decree of 2005 (DA n. 77 of 26/07/2005 of the Department of Cultural, Environmental and Public Education of the Region of Sicily).

REIS is a consequence of the provisions of the UNESCO Convention of 17 October 2003 "Convention for the Protection of the Intangible Cultural Heritage ". Where the definition of Intangible Cultural Heritage is also provided, the areas in which this heritage is manifested and the invitation to member countries to define specific identification and safeguard programs of the same.

The areas indicated in which the Intangible Culture can manifest itself are the following:

The objective of REIS is to identify, classify, safeguard and promote Sicily's Intangible Heritage, i.e. its cultural heritage that is transmitted orally from generation to generation and which as such is particularly ephemeral and subject to a strong risk of extinction. .

The REIS in its initial phase (REI) consisted of four Books:

Subsequently, by virtue of the experience acquired and with the intention of making the regulatory instrument even more effective, updating it to the directives issued by UNESCO, a new decree was issued, the DA 571 of 5 March 2014, establishing the new Register of Intangible Heritage of the Sicilian Region (REIS), consisting of the following books:

the Book of Celebrations, Feasts and Ritual Practices
in which to register the rites, ceremonies and popular manifestations associated with religiosity, production cycles, entertainment and other moments that arise as historical-cultural traits characterizing the life of a community;

the Book of Professions, Knowledge and Techniques
in which to register the ergological practices related to the history and traditions of the communities and the knowledge related to the management of the territory and the representation of natural and cosmic cycles;

the Book of Dialects, Speaks and Jargons
in which to register those phenomena of linguistic communication that are the result of particular historical-cultural events or the expression of specific socio-cultural groups;

the Book of Expressive Practices and Oral Repertoires
in which to inscribe the musical, choreutic, dramatic, verbal and playful traditions transmitted within historically stratified community elaboration dynamics;

the Book of Living Human Treasures
in which to register those individuals, collectivities, groups that place themselves as unique or particularly qualified holders of technical, ritual-ceremonial, linguistic or expressive knowledge referable to "long-lasting" historical-cultural processes;

the Book of Symbolic Spaces
in which to register the spaces that have recorded events such as to produce dynamics of collective memories, symbolic production or that pose themselves as historically identified socio-cultural scenarios.

THE GOODS INCLUDED IN THE REIS

For further information, documents and updates go to the website of the Sicily Region: REIS 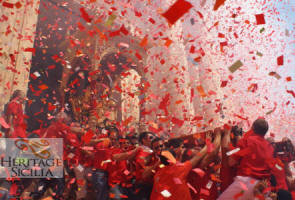