THEOpera dei Pupi it is a particular type of puppet theater, which established itself in southern Italy and in particular Sicily in the early 1800s. Sicilian puppets are characterized by a specific maneuvering mechanism (iron rods are used in addition to the wires) and from the fact that the protagonists come largely from novels and poems of the Carolingian cycle. The stories evoke the epic gestures of the gods Paladins of Charlemagne fighting against the Saracens, sometimes also religious tales linked to the Passion of Christ and the life of the Saints, the exploits of Garibaldi or those of famous bandits. Among the best known characters Orlando e Rinaldo but also Charlemagne, angelica e Gano di Maganza (the traitor) and the Saracens: Rodomonte, Mambrino, Ferraù, Agramante, Marsilio e Agricane. The affirmation of the Opera dei Pupi in theaters and especially in the squares was favored by the "Cuntastorie" (not to be confused with the "Cantastorie" who instead treats the stories mainly through singing). The Cuntastorie made sure that the stories soon became popular heritage, symbols of the desire for redemption and justice of a social class, spreading the concept of honor and creating opportunities for social gathering. As told by Giuseppe Pitrè (Sicilian childish games - 1889) the game called "Jocu a li PaladiniWas one of the most welcome childhood pastimes. 15 20 boys were divided into two groups: Christians (Orlando, Rinaldo, Ricciardetto, Milone, Ruggero) and pagans (Agolante, Ferraù, Tamburlano, Pulicardo, Learco). Charlemagne harangued the paladins to fight against the Saracens, ordering that the fighters of both sides face each other one at a time. Whoever received a blow to the belly first would throw himself to the ground dead and remain there until the end of the fight. The fallen was replaced by one of the same party. When there was no one left to die, the winner received the lady as a prize.

The theaters were often family-run; the sculpture, construction and painting of the puppets, renowned for their intense expressions, were made by artisans using traditional methods. 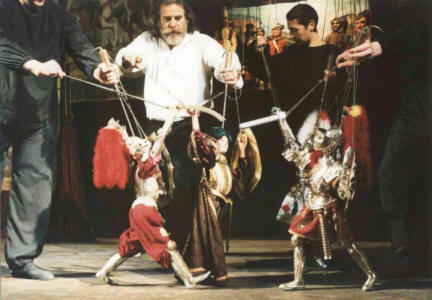 The "Puparo”Is the one who deals with the show, the scenography and, in some cases, the realization of the puppets. Thanks to its particular tone of voice, the Puparo creates the right atmosphere to involve the audience.

There are two main schools of the Opera dei Pupi in Sicily: that Palermo, established itself in the capital and widespread in the western part of the island, and that Catania, established itself in the city of Etna and spread, broadly speaking, in the eastern part of the island. The puppets of Catania reach up to one meter and thirty in height and weigh from 15 to 35 kilograms, while the puppets of Palermo rarely exceed cm. 80 of height and Kg. 6, 7 of weight. The catanese puppets have stiff legs, without joints at the knee, and, if they are warriors, they almost always hold the sword in their right hand; instead, the Palermo puppets can articulate their knees and draw and put the sword back in the scabbard. 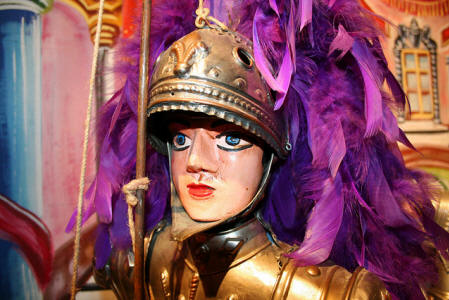 In 2001 the Opera dei Pupi is included in the Unesco program established in 1999 "Masterpieces of the oral and intangible heritage of humanity"  (Masterpieces of the Oral and Intangible Heritage of Humanity).  On October 17, 2003, Unesco approved the "Convention for the Protection of the Intangible Cultural Heritage".  The Convention entered into force on April 20, 2006, which led, starting from 2008, to the establishment of the "Intangible Heritage List“; all the elements previously included in the list have been automatically incorporated in this list of the Masterpieces of the intangible heritage of humanity established in 1999, among the elements included, two high expressions of the Italian popular cultural tradition, the Opera dei Pupi Siciliani and the Canto a Tenores of the shepherds of central Sardinia. (Unesco card)

In the second half of the twentieth century, the economic boom and new forms of entertainment, including television, meant that many forms of theater in other parts of Italy disappeared: the Opera dei Pupi is probably the only example, in the genre, of unbroken tradition. 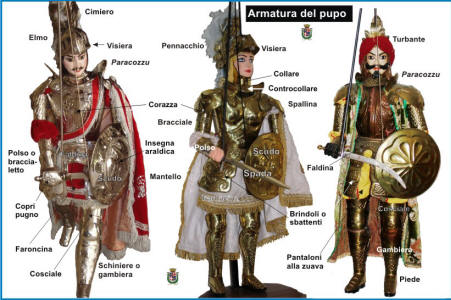