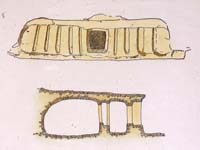 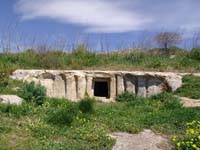 The Contrada Baravitalla is located in the northern part of the Cava d'Ispica, to the east of the Cava rises a rocky plateau, seat of the small necropolis of the Castellucian village of Baravitalla. On the latter site a real fortified village and a necropolis with about fifty tombs with artificial caves was found, one of these tombs, near a farm, is the "Tomb with fake pillars" characterized by 10 fake plates obtained on the sides of the entrance: 5 to the left and 5 to the right of the entrance. The elevation about 3,80 meters wide is 1,15 meters high. The tomb consists of two rooms, divided by a second door: an oval antechamber and a funerary room of the "oven" type with a height of mt. 1 and with diameter equal to mt. 2 and 1,5. (The aforementioned Masseria has the following coordinates: Lat. 36.51.34 Long. 14.49.49). During the early Bronze Age, the iblei area is strongly characterized by the so-called Castelluccio culture. Examples of the use of the façade of the tomb with false pillars obtained from the rock are a Lazzaro quarry o Cava grande (between Modica and Rosolini), a Cava D'Ispica - Calicantone and, precisely to Cava D'Ispica - Baravitalla. In south-eastern and southern Sicily there are hundreds of settlements belonging to the Castellucian period, sometimes only a few kilometers away from each other, some of these sites are: Branco Grande and Paolina, Castiglione, district on the road between Comiso and Ragusa, Monte Tabuto and Monte Racello near Cannicarao, Paraspola and Aranci , near Chiaramonte Gulfi, Monte Sallia, Cava dei Servi, between Frigintini and S. Giacomo, Ragusa Ibla, S. Croce Camerina. 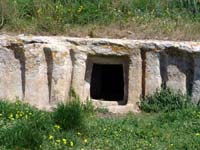 Click to see on Google Maps
Unnamed Road, Modica, RG
Rate it (1 to 5)
1.673
Send a notice to the publisher
[contact-form-7 id="18385"]
Deactivate the Youzify Membership System to use the theme's login form here.