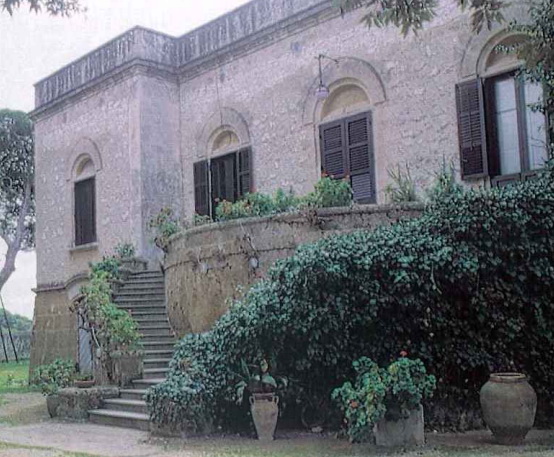 Villa Burgarella Le Torri, built around 1884-'85 and erroneously named villa Angelina on the maps, remains located in the final stretch of Via Marconi. The villa, with a somewhat eclectic taste, is set along a fundamental axis of longitudinal symmetry to which all the elements of the organism are rigorously coordinated. It consists of two elevations above ground: ground floor and first floor. The fronts of the villa respect the laws of symmetry with protrusions that create a volumetric movement to the mass of the building. The access staircase to the noble floor characterizes the decorative and volumetric context of the main facade, obtaining a compositional and scenographic result of considerable effect.
It, being uncovered, gives the villa a purely summer, "holiday" character.
Implanted in the second half of the nineteenth century, the garden of the villa Le Torri occupied a much larger area than the current one, which over time has been depleted by building speculation.
The initial layout of the garden is still legible inside the perimeter wall.
It retains the typical aspect of the Italian garden.
From the square in front of the villa an avenue unravels, a Washingtonia of which constitutes the perspective escape. It divides the garden into two areas, of equal size, designed by partly sinuous and partly regular avenues and by flowerbeds with a curvilinear perimeter bordered by box hedges and rich in palm trees and other exotic species.
In the rear part of the villa, the garden becomes a small wood planted on an area characterized by the presence of outcropping rock which highlights the naturalistic aspect of the site. Within this area, trees and various exotic species have reached a vegetative development free from formal constraints without being forced to stylistic and expressive needs, giving aesthetic dignity to the green area.
The remaining part of the garden, outside the enclosure wall, once a utilitarian garden, has been tampered with by recent urbanization works.

(Source: Decree 18/10/1999 published in GURS N. 35/2001 "Declaration of notable public interest of some historic villas and gardens located in the municipal area of ​​Trapani and Erice ".

Click to see on Google Maps
6 Via Francesco Sceusa, Trapani, TP
Rate it (1 to 5)
3.254
Send a notice to the publisher
Deactivate the Youzify Membership System to use the theme's login form here.