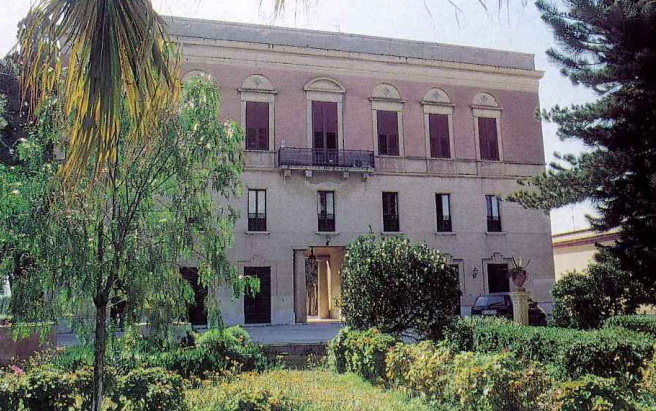 Built in 2870, built on a portion of the large estate that belonged to the Quartana and, although never completed in the interior decorations, it remains intact as an architectural artifact, even if it has unfortunately lost the character of a "Mediterranean garden".
Historical (war) and natural events (floods), and the changed economic conditions of the owners, have marked the entire composition: the large tree masses of the garden remain, while avenues and paths have been destroyed and the hedges and hedges have been damaged. the other elements connoting the original structure of the garden.
The entire planimetric composition of the area on which the villa stands is regulated by a main avenue, an ideal axis of symmetry, which crosses the entire villa from the entrance in via Marconi. The avenue reaches a second perimeter area, which delimits the villa and the Italian garden in front.
The garden extends over an area with a trapezoidal shape and is made up of two distinct parts: the "utilitarian" garden, which develops at the edge of the main entrance avenue, planted according to an original and precise subdivision of the land, cultivated with citrus groves and vegetable garden, and the aesthetic garden, in front of the main and lateral façade of the building, which is divided into geometric parterres with flower beds with a curvilinear perimeter with flowers and isolated specimens of shrub species such as: araucaria, cypresses, laurel hedges, cycas, dracena, yucca, etc.
The villa, typologically definable as a "palace", is divided into three levels, as well as a service floor which partially occupies the south wing of the building. In the second body of the building, detached from the villa, there are the deposits, the stables, the service rooms and the covered secondary entrance. The villa with the aforementioned annex defines the courtyard behind which continues the avenue covered by a pergola at the edges of which the areas are planted with olive groves. (Source: Decree 18/10/1999 published in GURS N. 35/2001 "Declaration of notable public interest of some historic villas and gardens located in the municipal area of ​​Trapani and Erice ".

Click to see on Google Maps
5 Via delle Pleiadi, Trapani, TP
Rate it (1 to 5)
4.002
Send a notice to the publisher
Deactivate the Youzify Membership System to use the theme's login form here.