The SIC, extended to 2646 Ha, falls within the territories of the municipalities of Vittoria, Ragusa and Comiso.
evolved from washed-out red earth, red earth, alluvial silts. The substrates are limestone, limestone, marl (trubi), clays, gypsum. The calcarenites intersperse
to evaporitic rocks.The climate of the area is for the areas close to the lower dry lower Thermomediterranean sea, in the areas far from the sea it is
Dry superior thermo-Mediterranean according to the Rivas Martinez criterion adapted to Sicily by Brullo & al. (1996). The pine forests, making up the vegetation
almost dominant they settle preferably on marls, where they form an edafoclimax.The site is characterized by being one of the few places in Sicily
host natural pine forests to Pinus halepensis. It is also characterized by the presence of very rare species and by numerous endemisms, both of which are large
geobotanical interest. A part of considerable extension houses the actual pine forests (code 9540) which settle on scrubland or garrigues in which
gates are open mainly due to fires. The Aleppo pine can - after fire - give life to very dense populations than by shading
they completely suffocate the undergrowth vegetation, and are therefore harbingers of new fires. In the natural condition, fires occur once every 80
about years and do not produce excessively dense bush. Due to anthropogenic disturbance, fires in recent decades have increased their frequency and
The physiognomy of the forest has taken on an excessively youthful character. The vegetal formations however are in the naturalness a set of scrub and garrigue with
pines, scrub and garrigue without pines, arid meadows of the Thero Brachipodietea. These formations are not in balance with each other, but over time governed by
conflicting forces of fire and the tendency to climate change are transformed into each other. Looking carefully at the scrublands and scrublands with pines and without pines
no difference is observed either in the physiognomy or in the structure. The scrub is often attributable to Chamaeropo-Quercetum calliprini Barbagallo, Brullo and
Bassoon, or again with Pistacio-Quercetum ilicis Brullo & Marcenò, and in somewhat rarer cases with Ephedro-Pistacietum lentisci Brullo, Guarino & Ronsisvalle, while
Rosemary-Thymetum dominates in the garrigue, abundantly accompanied on the warmer slopes by Globularia alypum.
predominantly sandy soils there are groupings characterized by Juniperus oxycedrus subsp. macrocarpa (Sm.) Ball, which however have little relevance
as the SIC does not extend to the strictly coastal area. On the same sands, however, Retama raetam subsp. gussonei. It deals with
evidently of cases of opportunistic exploitation of virgin habitats destined sooner or later to disappear due to human activities, and not the case of
stable settlement on a dune (it is therefore doubtful whether these cases should be ascribed to the code 2250, as was done in the first compilation of this form).
On the flanks the Thero Brachypodietea class reigns with formations that are composed in mosaic with the garrigues with Timo and Rosemary. Where the sand becomes
dissolved but manages to retain a good percentage of humus, the associations of Malcolmietalia settle there (code 6220). This is where it is present
the Vulpio-Leopoldietum gussonei association including in the Brancato-Buffitella district a population of about 100.000 individuals of Muscari gussonei, which,
insisting on about one hectare of land, it appears to be the largest population in the whole range of the species. In the parts of the interior, towards Comiso in
ampelodesmeti (code 5330) abound in correspondence with the districts Comuni, Martorina and Passo Piro. Where marls or limestones are substituted
from the clays there are aspects of Pegano-Salsoletea (codification 1430), with the presence of Sasola oppositifolia, Salsola agrigentina, Capparis ovata, Asparagus
aphyllus, etc. Finally, there is no lack of aspects of the brackish riparian areas with various species of Juncus and Carex to which, however, it is not appropriate to give great importance to
the scarcity of the space occupied (code 1410). However, this is where the rare Lithrum tribracteatum appears. Vegetation dominated by
Euphorbia dendroides referable to Oleo-Euphorbietum dendroidis Trinajstic 1974 (class Quercetea ilicis). Properly fluvial vegetation is very degraded
having been completed in the past eradicated the riparian forest to make room for crops of Arundo donax.

The value of the site is remarkable. In the meantime, it must be said that biodiversity, however it is considered (in relation to species, communities, forms of landscape, etc.) is
always very high. This is also testified to the public of non-specialists by the beauty of the landscape, and by the number of encounters with "different things"
normally occurring during any excursion. The richness in biodiversity is explained not only by the variety of physical conditions (soils,
exhibitions, etc.), but also from the incessant dynamism of the vegetation, which cyclically acquires negentropy and subsequently loses it due to events
apparently external but in reality self-produced by the aging of the formations. It must certainly be said that the local climax is represented by the Quercetum
ilicis, much less rich in biodiversity. The failure to reach this stage and the maintenance of the pine forests over the millennia is certainly due to
moderate disturbance induced by man with its traditional activities. Surprising is the number of rare, endemic and phytogeographical plant species
present: Loeflingia hispanica, Cistus clusii, Retama raetam, Ophrys calliantha, together with Muscari gussonei and Ophrys lunulata are among the species that do not
can never be missing in a very limited list of the floristic preciousness of the Ippari Valley. Finally, it should be emphasized that the valley is a
concentrate of many species, including rare ones, of the various genera of Orchidaceae. The avifauna is of considerable interest with species mainly linked to silky environments and
subxeric and sandy substrates. Invertebrates show a remarkable richness and variety of species as there are related taxa of significant scientific interest
to various environments: streams, floodplains, pine forests, scrubs 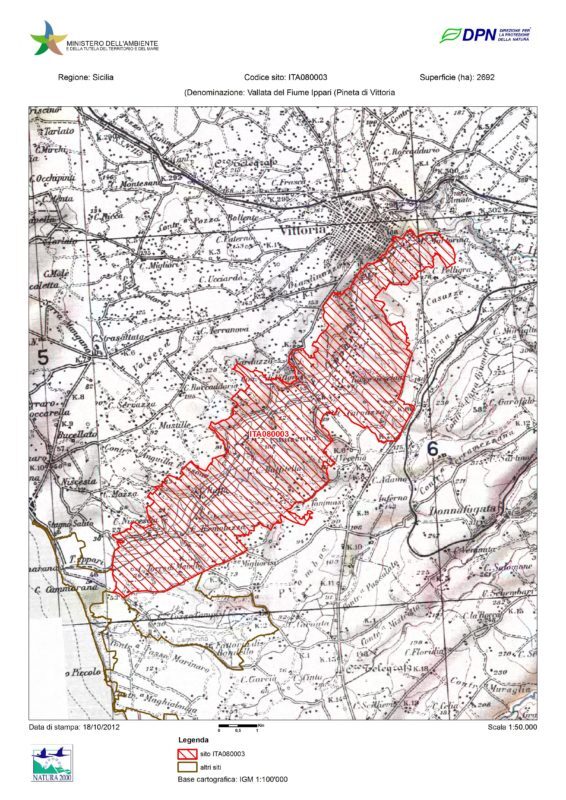 Street View (if present)
Location
Rate it (1 to 5)
2.333
Location
Unnamed Road
Send a notice to the publisher
Share / Share