The stream is flanked at times by a riparian wood, still well preserved, which hosts an important population of oriental plane trees (Platanus orientalis), associated with apioppi, willows and oleanders [Populus Nigra, Salix pedicellata, Salix alba, Nerium oleander) _ The the population of Platanus orientalis of the Cava Paradiso is threatened by a pathology of the plane tree cancer, which is proving to be very destructive. The shrub vegetation is very widespread? Lianosa. The vegetation of Cava Prainito does not seem to have been the subject of specific studies nor has the presence of endemic species been checked, which instead the characteristics of the area suggest possible.Cava Prainito is an area of ​​refuge and reproduction for a very rich fauna , above all invertebrate but also vertebrate, with diversified and sometimes rare animal communities. The habitats of greatest interest are flowing waters, springs, caves, the Npano wood. Furthermore, given its elongated shape, the quarry represents a corridor that crosses the Hyblean plateau in an approximately east-west direction, along which species can move around the area. Unfortunately, there is not much information on the fauna of Cava Paradiso, a bit like that of all the Iblei. Similarly to what has been said for the vegetation, the characteristics of the area make it possible to believe that the presence of endemic species is possible, especially among invertebrates.

Of all the quarries present in the Iblei mountains, Cava Prainito is certainly one of the most spectacular for the beauty of the landscape as a whole, the naturalness of the
ecosystems that have been preserved there, the richness of animal and plant biodiversity present from the plateau surrounding the quarry appears as a rift
sudden in the rock, a narrow and deep valley with almost vertical limestone walls that develops for several kilometers. Along the valley floor the green stands out
of the thick vegetation, which contrasts sharply with the aridity of the surrounding landscape. The Prainito stream, which carved the valley and continues today to shape the
morphology of the area, it flows along the valley floor for about 4 km, of which 1,5 are perennial and 2,5 are temporary. This watercourse is fed by two main sources
called "Delle Povere Donne, Soprana and Sottana", both located just downstream of the promontory called Cozzo Tondo and its path, before ending in
River Tellaro, is partly captured and partly flows into a sinkhole. The orographic conformation of the area, of calcareous nature, means that inside the
various Iblean quarries create environments that are difficult to access and with particular microclimates that make them favorite places of refuge for numerous plant species and
animals. The difficult accessibility and the marginal interest in exploitation by man have therefore preserved the natural ecosystems of Cava Prainito, which
thus represents an "ecological corridor" in the Hyblaean territory: a strip of territory that is still "natural", along which the species can survive and move, inserted in an area, the surrounding plateau, which instead is transformed and impoverished by the point from a naturalistic point of view. The value of Cava Paradiso is therefore not only 'static', as a valuable natural area where animals and plants can find refuge, feed and reproduce, but also 'dynamic': a language of territory that can connect more distant natural areas where the species can move to go from one to the other of these wne, forming an 'ecological network', with all the advantages related to environmental conservation. In particular, the peculiar naturalistic value of Cava Paradiso is given by the course of the Prainito stream which flows along the valley floor all year round, forming pools of crystalline waters of great beauty, and allowing the development of a thick and intricate riparian vegetation. The presence of dog populations is of considerable interest, which have presented a particularly valid quantitative trend over the years
as part of the investigations on the fish map of the province of Ragusa. It should be emphasized that the dog populations have undergone a significant contraction, especially in Sicily. The little dog is included in the Bema convention as a protected species, and is also considered vulnerable in the red list of Italian freshwater fish. The presence of this population therefore makes the Prainito an area of ​​particular naturalistic value. Of particular interest is the presence of a valid river crab population (Potamon nuviatile J, a species that has shown a rarefaction and numerical reduction in recent years throughout its distribution range. In a stream that appears suitable for a population of trout macrostigma, the salmonid populations found, characterized only by alien species, show an inadequate fish management of the area.
were found at the same time, but in a temporal sequence, thus indicating a presence strictly linked to repopulation activities. The surrounding plateau has been transformed over time by anthropogenic activities, monoculture agriculture, settlement breeding, etc. so much so that today there is no longer any trace of the natural tree and shrub ecosystems, the only trees present in fact belong to cultivated species such as carob trees, almond trees, olive trees [see the Land Use Charter on page xxx? the course of the Prainito stream coincides with the border between the municipalities of Rosolini and Modica]. On the contrary, on the rocky walls and on the bottom of the quarry, a very rich Flora has been preserved, which changes rapidly as it descends from the plateau towards the stream, to xerophilous species mainly herbaceous and shrubs, scrubs, garrigues, rupicola, reduced strips of holm oak are replaced by man as you get closer to the watercourse, more hygrophilous forms of plant life, including trees. 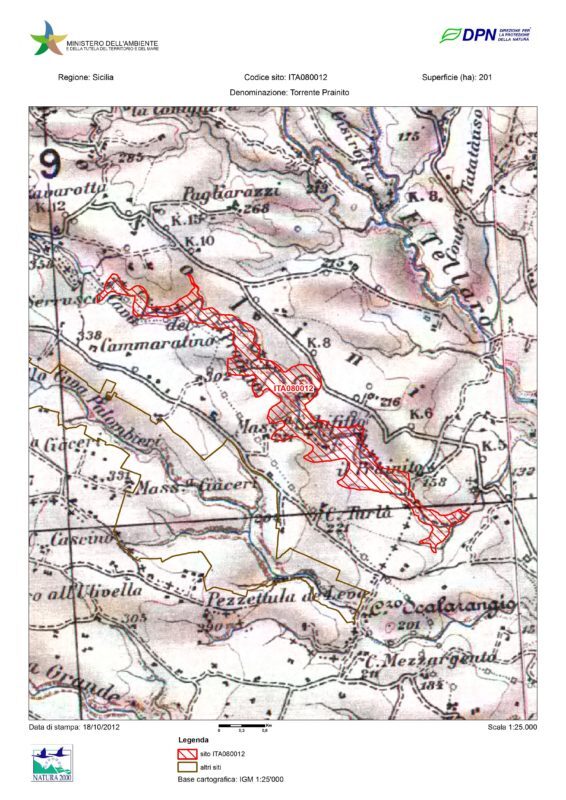