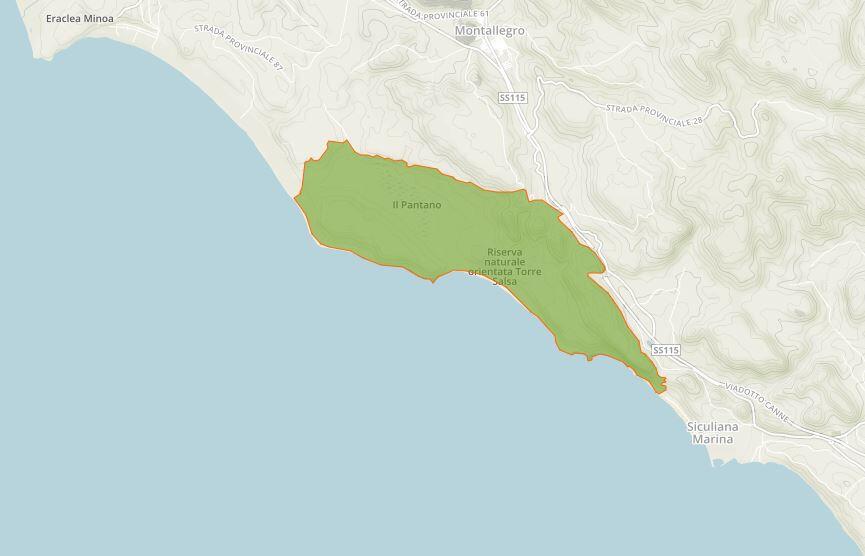 Between Siculiana Marina and Eraclea Minoa there is an uncontaminated coast, the Torre Salsa Oriented Nature Reserve, where the chalk cliffs alternate with the calcareous marl in Globigerina, sometimes covered with layers of clay.

The herbaceous and bushy vegetation that covers the environment, sometimes impervious, sometimes allows access to the splendid beach by narrow paths between the rocks. The sea is crystal clear, the seabed lush with flora and rich in fauna.

Torre Salsa, an ancient watchtower, is located in the heart of this oasis and dominates the top of a small clay promontory from which, where the erosion process is more intense, the white calcareous marl shines.

On the sea, a jagged rocky plateau creates a myriad of paths, where the small fish dart quickly among the algae and the slow crustaceans find refuge. The rugged nature of the places has preserved this oasis from subdivisions and projects it, for the variety and beauty of its environments, for the importance of flora and fauna, among the most interesting areas of Sicily, deserving of maximum protection.

The territory of the Torre Salsa Reserve, extended for 761,62 hectares, falls in the province of Agrigento in the territory of the Municipality of Siculiana.
Its coastline extends along the coast for about 6 kilometers where it is possible to see the alternation of more or less steep cliffs, dunes and immense and solitary beaches, destination, in the summer months, for lovers of bathing.

Behind the cliff there are natural terraces where the agricultural landscape has developed.

These well-modeled terraces are engraved by some very branched and deep streams, such as the Cannicella stream and the Eremita stream, which flow into the sea building enchanting scenic views. Around these terraces, on one side the cliff and the sea and, on the other, the more inaccessible and mountainous landscape that culminates in the peaks of Monte Stella (148,40 meters) with a slope overlooking the sea, of Monte Cupolone ( 170 meters) on the top of which you can see signs of the quarries of inert materials that have been abandoned for years and of Monte Eremita (162,50 meters).
Between Monte dell'Eremita and the promontory of Salsa where the ruins of Torre Salsa stand out, you can see a large depression characterized by the presence of the Salso stream known as "Pantano".

The area around it is subject to natural flooding which makes it inaccessible, especially in the winter months.

In the summer season the quagmire dries up and through a trazzera that runs alongside it it is possible to reach the beach. In this area there are many cultivated land, a reforestation with an area equipped for picnics and, in the Salsa promontory, a large reforestation that reaches up to the dunes and hedges that delimit the arable land. (Source www. wwftorresalsa.it site no longer active)