The area, which covers 17.873,74 hectares, falls within the municipalities of Gela, Niscemi, Butera, Acate, Caltagirone and Mazzarino. From a geomorphological point of view,
presents a considerable variability, including the humid environment of the Biviere, which develops close to wide dune strands made up of fine and quartz sands,
sometimes interrupted by rocky outcrops of various kinds, where most of the lithological types that characterize the Erei Mountains behind are represented. In the territory
there are gypsum, clayey sands and calcareous conglomerates, passing through cemented calcarenites, with frequent intercalations of Pliocene sandy clays.
In the coastal area these aspects characterize the coastal outcrops of Monte Lungo and Torre Manfria, on which it is also possible to detect gullies,
as well as a base of calcarenites mixed with gypsum. The Piana di Gela is mainly characterized by clayey-limestone formations dominated by deposits
made up mainly of clays and floods referable to the Quaternary (Catalano & D'Argenio, 1982). To the north a hilly system of evaporitic origin develops, a
more or less uneven morphology, while to the east of the Gela stream there are deposits of Pleistocene yellow sands mixed with limestone, conglomerates and clays
marly, which degrade towards the sea. According to the thermopluviometric data of the area, average annual
average annual temperatures are between 19 and 16,5 ° C, starting from the coastal strip towards the hills of the interior. In accordance with the bioclimatic classification of
Rivas-Martinez, the coastal territory is mainly part of the lower dry thermo-Mediterranean, tending towards the upper inland. The coastal landscape
della Piana is largely dominated by crops, in particular arable land; greenhouse cultivation, which goes close to the Biviere, assumes considerable importance. In the area of
Niscemese woodlands are well represented, dominated by cork. In the stretch of sea in front of the Biviere the coastal bottoms are entirely
covered with sediments on which the following biocenoses insist, from the coast towards the open sea: the biocenosis SFHN (superficial fine sands), the biocenosis SFBC (fine sands
well classified) up to about -20, -25 meters deep, and the VTC biocenosis (coastal terrigenous muds) further offshore.
facies with Cymodocea nodosa which forms large and dense “pelouse” starting from -10 meters of depth. This marine phanerogam hosts an epiphytic population and
well structured vagile, which supports fish productivity in the area

4.2Quality and importance
The area of ​​the Biviere di Gela and the Macconi - despite being considerably influenced by the strong anthropization - presents a significant naturalistic-environmental interest, as it preserves various floristic entities, as well as particularly rare phytocoenoses in Sicily. The humid environment, however, constitutes a biotope
of significant interest for wintering, nesting and stopping of various species of migratory and sedentary fauna. The agricultural mosaic of the Piana di Gela is
mainly represented by extensive cereal crops alternating in rotation with bare fallow and alternative crops such as: broad beans, chickpeas and artichokes with
multi-year plants. These agricultural ecosystems have favored some species of avifauna such as: Ciconia ciconia, Circaetus gallicus, Falco naumanni, Burhinus oedicnemus, Glareola pratincola, Melanocorypha calandra, Calandrella brachydactyla. The size of these populations, in the national field, is of importance
strategic for conservation. The Piana di Gela borders the Piana di Catania to the north and separates the Iblei Mountains from the Erei Mountains. The Gulf acts as a funnel favoring
the crossing of Sicily for the aquatic birds coming from North Africa, especially in the spring period. Only between February and April the ducks arrive
on the gulf they are> 45.000. Any wetland along this corridor (artificial or natural) has strategic importance for conservation on stairs
Equally important is the coast of Manfria, characterized by the coexistence of various lithological substrates, which, together with the
peculiar climatic characteristics, favor the conservation of a remarkable floristic and phytocenotic biodiversity. Overall in the area in question are
present aspects of psammophilous vegetation, halophytic communities, marshes and rupicolous, scrub formations (even if small), garrigues, prairies, ephemeral terns,
hygro-hydrophytic cenosis, halophilous ripisilve with tamarisk, etc., which give rise to a myriad of habitats colonized by a rich fauna.
also various entities that in the regional area are rare or considered of significant phytogeographic interest, in turn mentioned in the list in the section
3.3(D) 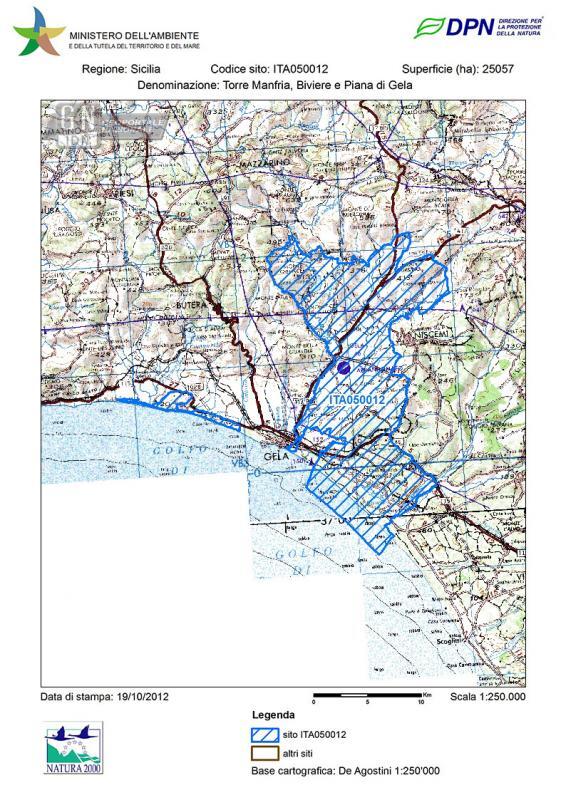 Click to see on Google Maps
Gela, CLNiscemi, CLButera, CLAcate, RGCaltagirone, CTMazarin, CL
Rate it (1 to 5)
0.000
Send a notice to the publisher
[contact-form-7 id="18385"]
Deactivate the Youzify Membership System to use the theme's login form here.