They are included in the Regional Nature Reserve of the Stagnone Islands of Marsala.

The site is composed of a large expanse of confined sea and / or lagoon (the Stagnone di Marsala) and a series of coastal salt pans that extend
immediately south of the city of Trapani to Marsala. There are some small islands inside the Stagnone (Mozia or S. Pantaleo, La Scuola and Santa
Maria), while the Isola Grande separates it from the sea. The area also includes a stretch of open sea, outside the north mouth of S. Teodoro
the administrative area in question, extended for a total of 3.581,96 hectares, affects the municipalities of Trapani, Marsala and Paceco.
together with the island of Santa Maria and the island of San Pantaleo (Mozia), they rise in the large lagoon overlooking the coast of Marsala. The morphology of the whole
the area located north of Marsala, including the lagoon area of ​​the Stagnone, suggests recent subsidence movements which probably
also affected part of the surrounding coastal strip, on the basis of which what previously must have been a large alluvial plain, was largely
covered. This is also evident from the alluvial outcrops present on the Isola Grande itself; these outcrops, of clayey-marly type, highly altered and
with a high content of calcareous masses, secondary botrioidals, as well as pebbles of various kinds, are also repeated within the coastal strip of
Marsala. The Saline di Trapani and Paceco include a vast retrodunal depression still exploited today through saliculture. The whole area is located
flooded for most of the year, with a portion that dries up completely in summer. The substrate is impermeable due to the high concentration of silt and
clay. The lagoon-like environment is enlivened by the presence of two large openings located to the north and south of the Lunga island, which allow circulation
of the sea water inside. From the thermopluviometric data of the stations of Trapani and Marsala there are average annual rainfall between 483 and 500
mm, while the average temperatures exceed 21 ° C - based on the bioclimatic classification of Rivas-Martinez, the SPA is part of the lower thermo-Mediterranean
The marine area in front of the northern mouth of the Stagnone is almost entirely occupied by a luxuriant Posidonia oceanica
extends from a few cm deep up to about 5 meters: it is part of the immense prairie that starting from Capo Feto extends to the coast of Trapani,
including the seabed of the Egadi islands, with the exclusion of Marettimo. Within the lagoon area, between the Isola Grande and Santa Maria and La Scuola, the prairie
it assumes a particular structure, the so-called “atoll formation”, arranged in an almost perfectly circular manner and of variable dimensions. Between Punta
of the Alga and Isola Grande, the prairie forms the so-called “recifal plateau”; the low depths typical of the interior of the Stagnone allow the emergence of the
leaves during low tide, so the set of these typical formations can be summarized as “recifal formations”. The innermost part of the
Stagnone is instead almost entirely covered by a mixed population of Caulerpa prolifera and Cymodocea nodosa, belonging to the SVMC biocenosis (Sabbie
muddy in a calm fashion): inside there is also the seagrass Nanozostera noltii, as well as a multitude of species of benthic invertebrates (Porifera,
Cnidarians, Molluscs, Polychaeta Annelids, Crustaceans, Echinoderms, etc.). Remarkable is the presence of aegagropilic forms of algal species, such as Rytiphlaea tinctoria and
Lithothamnion sp .: these bentopleustophytic species are dragged to the bottom by the current and their slow rolling causes them to grow into a spherical shape,
very characteristic.The great biodiversity reported in this environment makes it a nursery and feeding area for many fish species, which here find
the ideal environment for the reproduction and for the growth of the juveniles of numerous species of Sparidae, Mugilidae, etc. The salt flats that are included in the area
they host, in the cold tanks, populations of Cymodocea nodosa and Ruppia cirrhosa, together with populations of benthic invertebrates.
4.2Quality and importance
The whole area is very important, both from a landscape and biological-environmental point of view. The salt system and the same areas more or
less depressed than the Stagnone, they host a set of halophytic and subalophilic plant communities, characterized by entities rather specialized in rare
Sicily, also in function of the peculiarity of the habitat, as well as by the regression itself in the regional territory. There are numerous species of the vascular flora
appearing on the red list (Conti, Manzi & Pedrotti, 1992). The presence of various entities of the biological flora is also of particular interest. In the list
reported in section 3.3, some interesting elements of the flora are mentioned, whose presence in the territory is considered of particular interest
phytogeographic (D). In 1980 the area was declared of high ornithological value at an international level by being included in a special "inventory". In 1989
the area of ​​the Stagnone di Marsala and the salt pans of Trapani have been included in the list of areas of particular ornithological importance in Europe. Numerous species
of endemic or rare insects, some of which in the Stagnone area are the only station of presence in Italy (eg Teia dubia).
of Posidonia oceanica, in addition to its importance as a nursery area for fish species, complete the peculiarities of this environment, which more than any other has
maintained a balance between the millenary human activities (fishing, aquaculture and saliculture) and its naturalistic and ecological characteristics. Inside the
Posidonia oceanica mollusc is present the Pinna nobilis mollusk, the largest bivalve present in the Mediterranean and included in Annex 4 of the Habitat Directive.
The marine area is reported as an elective for the speciation processes of marine taxa. 2 species of Osteichthyes were found: Opeatogenys gracilis and Syngnathus
abaster 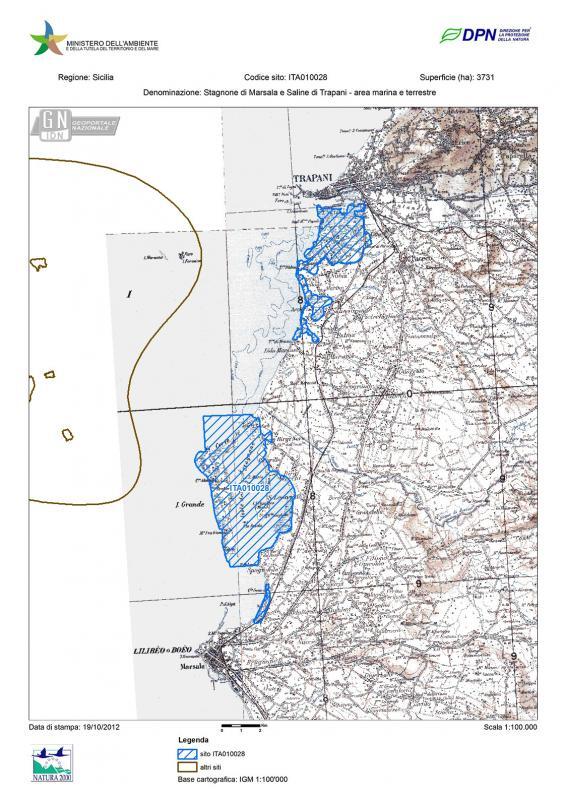 Click to see on Google Maps
Unnamed Road, Marsala, TP
Rate it (1 to 5)
3.003
Send a notice to the publisher
[contact-form-7 id="18385"]
Deactivate the Youzify Membership System to use the theme's login form here.