The site is shared by the municipalities of Modica and Pozzallo. The soils are sandy and silty (in correspondence with the marshes behind the dunes). There are also mosaics of brown soils
and Mediterranean red lands. The substrates are calcarenites, marls and sands. The climate is dry thermo-Mediterranean according to the terminology of Rivas Martinez.
considerable biogeographical interest. Although besieged by the relentless anthropization, it still retains interesting strips of psammophilous vegetation and environments
halophilic in retrodunal depressions; the class Sarcocornietea fruticosae (1420) is present in the semi-humid belts of retrodunal depressions. For this class
the presence of Sarcocornia perennis, Sarcocornia fruticosa, Halimione portulacoides, Arthrocnemum macrostachyum is relevant.
in winter and dry in summer there are representative associations of Juncetalia maritimi (1410) such as Limonio-Juncetum acuti, Imperato-Juncetum tommasinii
and Schoeno-Plantaginetum crassifoliae, characterized as a whole by Juncus maritimus, Hordeum maritimum, Juncus acutus, Plantago crassifolia, Centaurium
spicatum, Schoenoplectus littoralis, Arthrocnemum macrostachyum, Imperata cylindrica. The system of incipient dunes is still relatively intact with
the Agropyretum mediterranei Association (2110) to Elymus farctus, Sporobolus virginicus Kunth, Launaea resedifolia, Eryngium maritimum, Euphorbia paralias,
Echinophora spinosa, Ammophila arenaria subsp. australis. Also on the incipient dunes and in contact with the beach there is space for associations of the Cakiletea
maritimae (1210) with Cakile maritima, Atriplex tornabeni (extremely ephemeral), Salsola kali subsp. kali, Salsola kali subsp. tragus, Glaucium flavum,
Polygonum maritimum, Euphorbia paralias Relatively well developed are the dunes consolidated by the associations of Ammophiletea (2120) with Ammophila
arenaria subsp. australis, Launaea resedifolia, Echinophora spinosa, Medicago marina, Scolymus hispanicus, Euphorbia paralias. Malcolmietalia (2230) are
present in very impoverished aspects reduced only to Maresia nana and Vulpia membranacea. Even the Crucianelletum maritimi (2210) is today extremely
impoverished being characterized almost exclusively by Pancratium maritimum.
Coridothymus capitatus, but the endemism Antirrhinum siculum is abundantly present in contact with paths and other sites of anthropization.

The site is of considerable biogeographical interest as it is among the cases of coastal habitats bearing psammophilic and halophilic formations (in the retro-dune depressions). His
importance is linked to the extreme rarity with which it is possible to find similar environments in good natural conditions along the coast of Sicily
southern. It is characterized by an interesting both sedentary and migratory avifauna and by invertebrate fauna linked to coastal dune and back dune environments.
from a floristic and vegetational point of view, the site has a good naturalistic value. In its central part it is still in good condition. The intensification of the
anthropogenic pressure that has occurred over the last few years has mainly affected the perimeter band, where biodiversity and structural complexity are
considerably decreased.The many orchids present enhance the site (in spite of the limiting nature of the sandiness of the site). Of particular value goes
considered the endemism Serapias orientalis subsp. siciliensis Bartolo & Pulvirenti exclusive to Sicily. In the future this area, adequately protected, could
play the role of a natural seed bank capable of triggering spontaneous recolonization processes of nearby coastal areas, currently degraded. 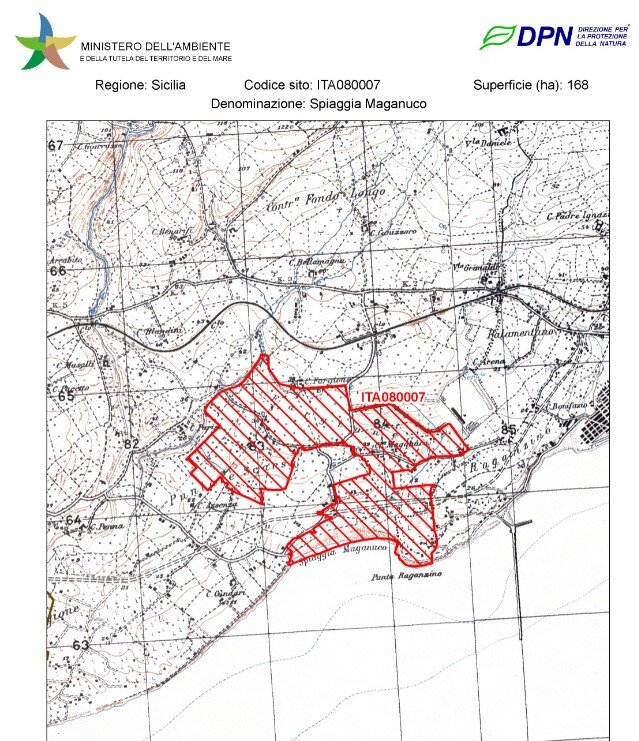