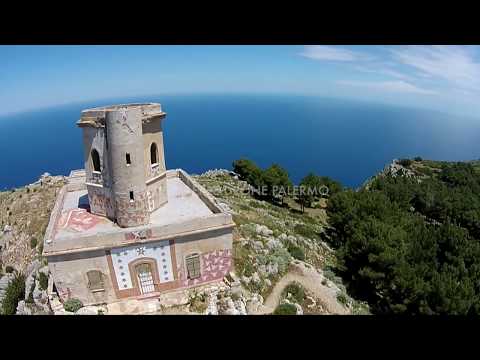 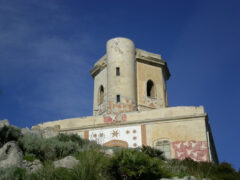 Semaphore (Lighthouse of the Hermit)

The Semaphore was a lookout post of the Royal Bourbon Navy of the Kingdom of the Two Sicilies. The strategic position on Monte Gallo allowed the view of the whole coast, to the west up to San Vito Lo Capo and to the east of the whole Gulf of Palermo almost to Cefalù. Unlike the lighthouse, which is a reference point for navigation, the Semaphore is also equipped with equipment suitable for transmitting orders to passing vessels, regulating traffic towards the port of Palermo. The external structure, even if in bad condition, is not compromised, on the contrary it maintains its solidity. The main part of the building has a square plan, with rooms in succession. In the center of the square is the staircase leading to the upper room, the most interesting element of the building, the octagonal watchtower. The capacious cisterns for the collection of rainwater, still visible outside the factory, dug into the rock are interesting. The traffic light now has a permanent "guest", the hermit Nino, who transformed the building by adorning all the walls and roofs of the numerous rooms with sacred mosaics, made with polychrome pebbles and small pieces of glass polished by the sea, making it his sanctuary. The decorations extend outside the traffic light and also to the path that leads from the entrance of the reserve to the sanctuary, which he renamed "Via Santa". Many of the scenes depicted refer to the Last Judgment, with "many" angels with bloody swords. Surely it is a visit that leaves its mark, which is not forgotten. Nino prefers to be called Isravele (rise up in reverse). He lives without electric light and with a battery-operated radio, constantly tuned to Radio Maria. He has a vegetable garden, an oven and a kitchen, sometimes he goes down to town to buy food but, above all, to find the material he needs to complete his works. Although Isravele is little known to the majority of Palermitans, he is considered by art history scholars to be one of the exponents of Art Brut or raw art. The concept of "raw art" indicates the productions made by non-professionals who operate outside the conventional art system, in a completely unconscious and disinterested way.

Click to see on Google Maps
Unnamed Road, Palermo, PA
Rate it (1 to 5)
4.001
Send a notice to the publisher
[contact-form-7 id="18385"]
Deactivate the Youzify Membership System to use the theme's login form here.