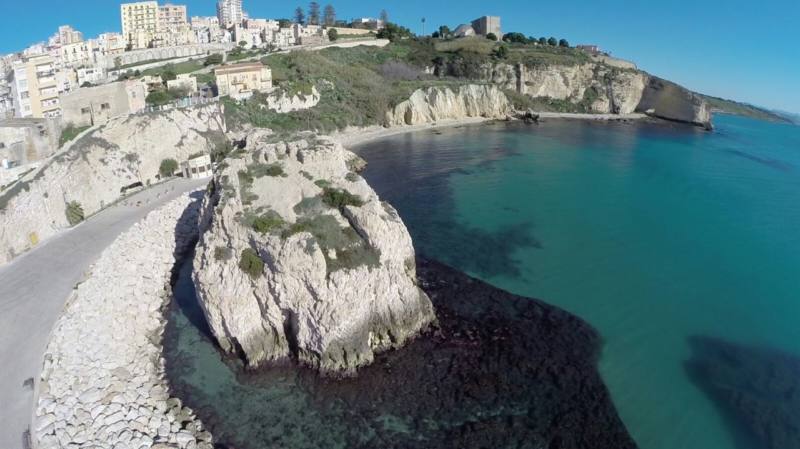 Rocca Sant'Elmo is a large rock, almost an islet, reduced to its current shape and size after the stone for the construction of the cliff to defend the old port was quarried from it in 1897.

Linked to this rock is the memory of a romantic legend whose protagonist is the Norman Countess Juliet, daughter of the Great Count Ruggero, the liberator of Sicily from Arab domination.

It is said that Juliet, who fell madly in love with her cousin, Roberto di Bassebille, unable to hope to marry him from her father, fled with him and took refuge in Sciacca in the cave which, partly ruined, still exists on top of the Rocca Sant'Elmo.

The two fugitives then, following the intercession of a friar, named Mauro, who lived as a hermit on Mount Kronio, were pardoned by the Grand Count who, after having obtained the necessary dispensation from the Pope, had them unite in regular marriage. As a wedding gift the Countess Juliet then received from her father the city of Sciacca with all its vast territory which then went from Belice to Platani.

It is for this historical-legendary memory that Rocca Sant'Elmo is also called by the people Rocca Regina. Fishermen who know the legend indicate the ladder carved into the rock that leads to the cave in which Juliet would have given birth to a child. The Conca Regina, which is located nearby, is also linked to the memory of Juliet who, having been the Lady of Sciacca, as such comes from the people raised to the rank of Queen. (Source: http://www.roccaregina.it/)

Visit Data Maps Heritage: Set of databases of the Sicilian and Maltese Cultural Heritage and to know other databases (nature, baroque, archeology, material assets and much more)