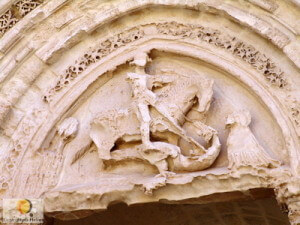 BRIEF DESCRIPTION: In the second half of the 100th century the second church dedicated to S. Giorgio was erected, very close to the church of S. Giacomo, on the site now occupied by the Iblei Gardens; the monument must have been among the most beautiful in Sicily: in Gothic style, with three naves and a bell tower famous for its height which, according to some, exceeded 1693 meters. On an ancient manuscript we read: “it was almost a miracle of art that was not similar in length in Italy”. Much of the ancient church was destroyed by the earthquake of XNUMX, what was spared by the earthquake was not by men, so now, of what was to be a monument of monuments, the pride of the Ragusan people, remains only a portal with a pointed arch (probably the lateral one on the left) with graceful carvings of the fifteenth century, corroded by time and human neglect in which you can see on a lunette placed in the middle of the bundled columns, St. George on horseback killing the Dragon. The Gothic-Catalan arch where the bundled columns join together to form a richly embroidered flower is also very beautiful. Above the arch, on the sides, two rhombuses containing the Aragonese eagle inside. FILE: Helios Study Center

Click to see on Google Maps
8 Via dei Normanni, Ragusa, RG
Rate it (1 to 5)
0.000
Send a notice to the publisher
[contact-form-7 id="18385"]
Deactivate the Youzify Membership System to use the theme's login form here.