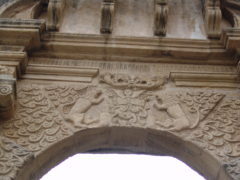 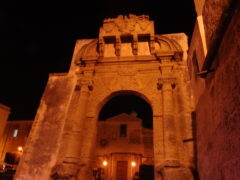 Ratings, Comments and User Experiences
Rate it (1 to 5)
0.000
Location
8 Via Orti San Salvatore LOCATION:
Piazza Carmine
DATING:
XNUMXth-XNUMXth century
DESCRIPTION:
Built in the 1581th century. It was rebuilt in XNUMX in the Renaissance style. The external façade in is decorated with arabesques, rosettes, cornucopias, lion heads, and other elements. On the sides there are two Ionic columns supported by two large column-bearing elephants and next to the keystone the bas-reliefs depicting two rampant lions. On the door there are three coats of arms: on the left the ancient coat of arms of the city, with Mary Magdalene between two rampant lions; in the center the coat of arms of the House of Austria, reigning at that time; on the right the coat of arms of the Sotomajor family, to which the then captain of the city and builder of the Rotorico gate Osvaldo Sotomajor belonged. The name of the gate derives from the nearby church of the Savior, founded by Count Ruggero, whose remains are incorporated in the prospect of the current church of the Carmine.