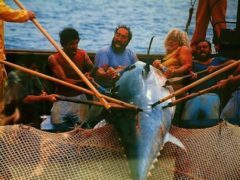 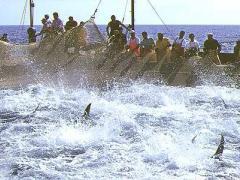 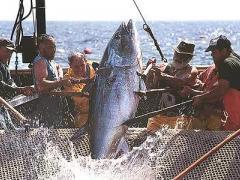 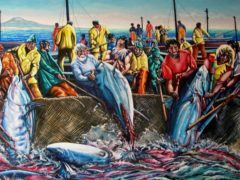 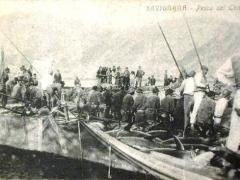 N. Prog.
145
Bene
Tuna fishing in Favignana
Book
REI - Book of knowledge
Approval date
15-12-2010
Category
Artisan technique
Province
Trapani
Location
Common
Favignana
Local denomination
Chronological News
The first graphic attestations on the practice of tuna fishing date back to the Paleolithic period. The primitive communities have left on the walls of the "Grotta del Genovese" on the island of Levanzo the memory of a moment of hunting, in which the image of the tuna stands out among other human and animal figures. The first written sources, however, date back to the second century AD The third book of the Treaty De Piscatione of Oppiano di Cilicia preserves memory of the complexity with which the rite of tuna fishing took place even then. Oppiano tells us about fishing in the Mediterranean area and describes the ceremonial according to a precise order and hierarchy. In the passage between memory and the practice of the rite, fishing is inextricably linked to the architectural structures of the tuna traps. Among these, in Sicily, that of Favignana is an emblem, the oldest tonnara, today no longer active in its industrial function.
recurrence
Seasonal
Date
From March to July
opportunity
Tuna fishing during their passage along the Mediterranean coasts
Function
Actors
The rais is the absolute leader of the crew, who in the exercise of his activity is flanked by two guardsmen, one of the two with the functions of sub-rais. All the rest of the crew is made up of about a hundred men hired for three consecutive months.
A series of people in charge of various occasional activities that take place on the ground in Marfaraggio.
Participants
Inhabitants of the island, tourists
Description
In the spring season the tuna in search of new loves, move from the cold waters of the north towards the Mediterranean. Along these routes, in places not too exposed to currents, the tuna fishermen build cities in the sea, made of passages, tunnels, atriums and courtyards of networks. The wisdom of the Rais, the head of the tuna community, determines the choice of the place and guides the complex techniques for the construction of the route and the operations of capture and fishing. In this articulated rite, which in Favignana took place every year in the months of May and June, a fundamental role was played by the equipment and compliance with precise rules. The Favignana trap, which has now become a museum, is one tunnara ô straight which, unlike those said the returns, block the path of the tuna that approach the coast. The complex system of nets that was created was used to make the tuna's path converge towards the last environment, the corpu, the only one with a bottom, in which at the first light of dawn the Slaughter. The moment of fishing involved the entire crew, a hundred fishermen, who took on different names and roles based on the place occupied in the boats. There were thirteen boats in Favignana with different denominations based on size and function (i vasceddi, varcazzi, the parascarmi, bastards, the gates i guard, la muciara rraisi). Once the tuna arrived in corpu the moment of fishing had begun. The fishing boats formed a square and with long hooked rods the tuna were raised inside the vasceddu i livanti. The moment of fishing represented the culmination of a dramatic gesture, in which the intense red color of the tuna's blood dissolved into the sea. At the time of fishing, the tuna fishermen sang songs and hymns and at closing the Rais shouted again "And ssempri both laratu lu nnomu of Ggèsu».
At the end of the ceremony, the boats were towed to the marina, while the vasceddu i livanti towards the factory, where a series of interventions on the catch were carried out for its processing.
Catalog Sheet
References
Buttitta, Antonino. 1988. The forms of work. Traditional crafts in Sicily. Palermo: Flaccovio.
Consolo, Vincenzo. 1986. Tuna fishing. Palermo: Sellerio.
Lo Curzio, Massimo and Rocco Sisci. 1991. Tonnare and traditional boats of Sicily. The remains of a sea culture, Messina: EDAS.
Sitography
Filmography
The last trap. 2001. Sound archive of the Sicilian Region CRICD. Cuccia, Salvo, directed by Vergara, Francesco, coordination and in collaboration with the Superintendence of Cultural and Environmental Heritage of Trapani.
Discography
Guggino, Elsa and Gaetano Pagano, edited by. Sicilian folk music and songs 1 in Songs of work. Albatros, VPA 8206, 1974. CD-Rom.
Notes
At the turn of the nineteenth and twentieth centuries, the activity of fishing and processing of tuna in Favignana has faded. The development of this activity on the island had had a big boost in the mid-800th century, thanks to the Florio family. Vincenzo Florio in 1841 bought the license to use the Favignana gabelle from the Egadi owners. With the exception of short periods of change of ownership, the tonnara remains linked to this important entrepreneurial family which, with the launch of an industrial processing system, characterized the island's economy until the second half of the last century. The technique and work organization found in Favignana will be a model for other Sicilian traps.
Today the Tonnara di Favignana, former Florio factory, is the seat of a Regional Museum. In this place the memory of its function over time, of the relationship with the local community and with the island territory, rich in history and precious archaeological finds, is preserved and reconstructed.
Author Card
Ester Oddo
Information on geolocation and the route to reach the place
View the place with Street View (if any). Relevant only if referring to tangible assets with associated address.
Location
Send a notice to the publisher
Share This Post