Interesting coastal strip characterized by an alternation of dune strings and rocky outcrops, represented by Miocene limestone, limestone and marl. In the rear dune portion brackish marsh depressions are found, subject to periodic submersion by meteoric waters mixed with marine ones, which arrive there by infiltration through the sandy strip or during storm surges. These coastal habitats are affected by aspects of psammophilous vegetation, both annual (Cakiletea maritimae and Malcolmetalia) and perennial (Ammophiletea), by halophilous rock vegetation of the Crithmo-Limonietea, by aspects of the Oleo-Ceratonion scrub, by the garrigue of the Cisto-Micromerietea , from shrub formations to Juniperus macrocarpa, from perennial marsh vegetation of Sarcocornietea fruticosae and annuals of Thero-Salicornietea and Saginetea maritimae, from helophyte aspects of Juncetea maritimi and Phragmito-Magnocaricetea. The steppe grasslands of the Lygeo-Stipetea and ephemeral lawns of the Trachynetalia distachyae are also frequent. Of particular importance are the extensive marsh depressions where, in addition to a very specialized halophilous vegetation, an interesting migratory and stationary avifauna shelter. In the central parts of the marshes during the period in which they are submerged, a dense hydrophytic vegetation is found in which algae such as Lamprothamniun papulosum and phanerogams belonging to the genera Ruppia, Potamogeton and Althenia dominate. The bioclimate of the coastal strip of south-eastern Sicily is part of the dry or sub-humid thermo-Mediterranean area with average annual temperatures above 18 ° C and average annual rainfall between 400 and 500 mm

Due to its position, the complex of marshes in south-eastern Sicily plays a very important role in the migrations of birds. In these areas the highest presences for Sicily of Ardeidae and Scolopacidi are recorded, abundant is also the passage of Anatidae, with presences lower only than those recorded in the Gulf of Gela. The site includes extremely heterogeneous territorial realities, and only the complex of the Vendicari marshes is subjected to adequate protection measures. The consolidated presence of the Reserve over the years has allowed the maintenance of the habitats and their peculiarities; an effective surveillance work has allowed the undisturbed stop and nesting of new bird species, enriching the already rich list of species.The remaining wet areas of this complex have instead undergone profound changes and have been subjected to constant disturbances and progressive transformations . The combination of these elements has certainly significantly reduced the potential for avifaunal receptivity of the area as a whole. Interesting is the presence of species linked to the agricultural environment, such as the Occhione and the Calandrella, rarefied and in strong decline in most of their range and therefore in a precarious state of conservation. In this context it is worth mentioning the recent disappearance of the Calandra, present in Vendicari until the previous investigations. The invertebrate fauna is also very rich and articulated, which includes many endemic species, rare or localized, sometimes known only for the coastal wetlands of south-eastern Sicily. banks of marshes in more or less concentric bands according to humidity gradients and soil salinity. Well represented are some quite rare associations in Sicily, in which species of particular phytogeographic interest and sometimes endemic are found, such as Limonium pachynense. In some coastal stretches, relics of plant formations are still found which in the past were quite widespread and well represented in the area. Among these are the rock halophilous communities at Limonium hybleum, the maquis with Quercus calliprinos, and the one with Juniperus macrocarpa. 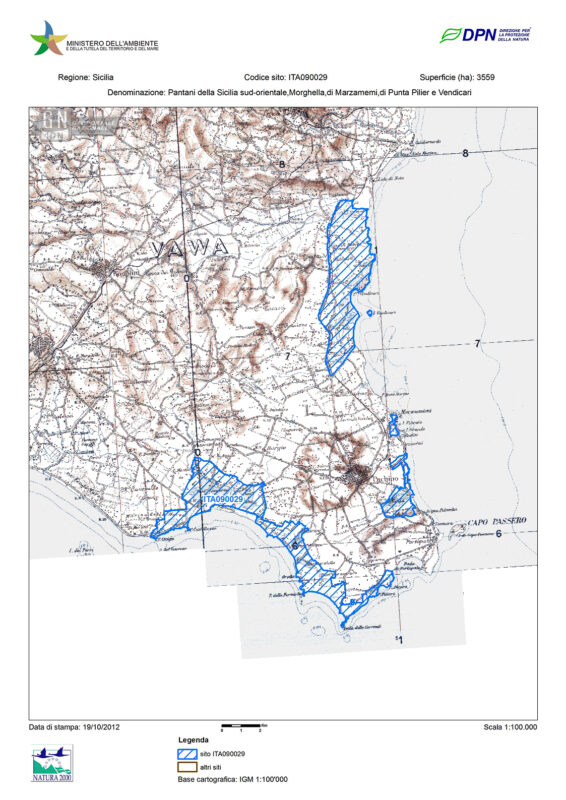 Click to see on Google Maps
Via Grotticelle, Pachino, SR
Rate it (1 to 5)
5.001
Send a notice to the publisher
[contact-form-7 id="18385"]
Deactivate the Youzify Membership System to use the theme's login form here.