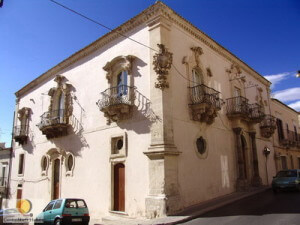 Palazzo Zacco is located in Via San Vito; coming from Corso Italia, the building is visible on the left, at the corner with Corso Vittorio Veneto.

The palace was built in the second half of the eighteenth century by Baron Melfi di S. Antonio, it is one of the first examples of noble Baroque architecture built in Ragusa Superiore. Towards the end of the nineteenth century the building was purchased by the Zacco family from which it took its current name. The noble coat of arms on the corner of the building remains of the ancient owners, supported by angels.

The building has two symmetrical elevations (each with three balconies), one overlooking Corso Vittorio Veneto, the other on Via S. Vito.

The main entrance door is located on the façade of Via S. Vito, flanked by two columns with Corinthian capitals that support the shelf of the central balcony. Characteristic are the two side balconies supported by shelves carved in the classic Baroque style where grotesque masks and anthropomorphic figures are depicted.

On the facade overlooking Corso Vittorio Veneto, the central balcony supported by five corbels is characteristic: the central one has a prosperous siren, while the four lateral corbels have musicians with trumpets and whistles. The large window is characterized by rich lateral sculptures and by a statuette representing St. Michael the Archangel placed in the center of the broken tympanum.