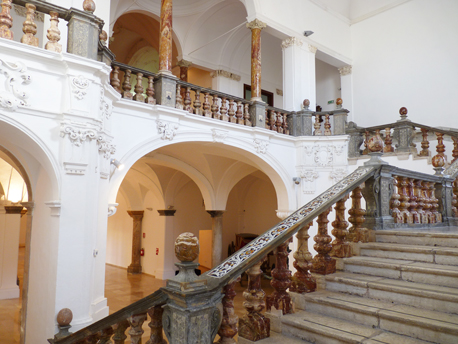 The “Agostino Pepoli” Regional Museum is located in the premises of the former convent of the Carmelite Fathers, adjacent to the sanctuary of Maria SS. Annunziata, where the famous marble simulacrum of the Madonna of Trapani, work of around 1360, attributed to Nino Pisano.
The Museum includes:
• paintings, with a wide representation of the artistic culture in western Sicily between the thirteenth and nineteenth centuries;
• sculptures, including those of the Gagini school, which greatly influenced statuary in Sicily;
• cribs of Trapani craftsmanship, characterized by manufacturing in Wood, Canvas and Glue;
• goldsmith's, with jewels belonging to the treasure of the Madonna of Trapani, silversof the Trapani tradition and above all some very valuable works in coral,material that had an important production and processing center in Trapani, so much so that it became a peculiarity of the local craftsmanship;
• sacred vestments, acquired with the Subversive laws of 1867 to the state patrimony, as well as vintage clothes belonged to the Trapani nobility;
• majolica, among which the pavements depicting tuna fishing, a very important productive activity in the area, stand out;
• memorabilia of the Risorgimento, testimony of the participation of the province in the unification of Italy

Click to see on Google Maps
178 Via Pepoli Agostino Conte, Trapani, TP
Rate it (1 to 5)
0.000
Send a notice to the publisher
Deactivate the Youzify Membership System to use the theme's login form here.