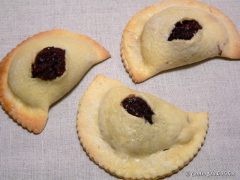 Typical biscuits from the city of Modica, they were also introduced by the Spaniards during their domination in Sicily in the sixteenth century, as evidenced by both the etymology of the name deriving from the Spanish "empanadas-empadillas", and the rather unusual combination
of meat and chocolate that recurs several times in Spanish culinary art. In past centuries, game meats were used for the preparation of 'mpanatigghi, only later for a purely practical fact did they begin to use beef and in particular the sirloin as it had no ribs. Let's see a video made by the Bonaiuto Modica Laboratory. Click to see on Google Maps
Modica, RG
Rate it (1 to 5)
1.001
Send a notice to the publisher
[contact-form-7 id="18385"]
Deactivate the Youzify Membership System to use the theme's login form here.