Imposing mountain ridge that extends southwards from the Strait of Messina along the Peloritani ridge. Despite the continuous anthropogenic disturbance (deforestation, grazing, urbanization, fire, agricultural activities, reforestation, etc.) this area still preserves the floristic-vegetational aspects of considerable landscape and naturalistic interest. From a geomorphological-structural point of view, the Peloritani are part of the Calabrian-Peloritan arch of origin Tyrrhenian, consisting essentially of intrusive and metamorphic rocks of a siliceous nature. Along the coast Quaternary deposits are found represented by sands and marly clays. From a climatic point of view, the Peloritan area is characterized by purely oceanic conditions with average annual rainfall that on the reliefs it abundantly exceeds 1000 mm per year and average annual temperatures of 15-17 ° C. Also significant is the presence throughout the year of a fog regime which covers the highest reliefs, due to the meeting of the Tyrrhenian winds with the Ionian ones. This favors the settlement of very peculiar forest and shrub formations, some typical of the Atlantic territories of southern Europe. In fact, the presence of commuted Calicotomo-Adenocarpetum bushes and pine forests is significant. of Cisto crispi-Pinetum pinee, both endemic associations of the Peloritani which are linked to a typically oceanic climate. Among the formations The Erico-Quercetum virgilianae, the Teucrio-Quercetum ilicis and the Doronico-Quercetum suberis are particularly widespread in the woods. In the coastal strip, yes finds, limited to the sandy substrates, an association of Malcolmetalia, represented by the Anthemido-Centauretum conocephalae in Sicily exclusive to this area. Another very peculiar thermo-xerophilic association exclusive of the Messina coast is the Tricholaeno-Hyparrhenietum hirtae. I am also present in the extreme northern tip of the coastal lakes (Laghi di Ganzirri) of great naturalistic as well as landscape interest. Floristically not are of particular interest, as the plants that settle in this humid area are for the most part quite common on the island. It deals with mostly of helophytes, halophytes and hydrophytes, which do not constitute particular associations due to the strong anthropic disturbance and the fact that the belt in which localize is rather narrow and does not allow the differentiation of coenosis. From the hydro-geological point of view it is a depressed area with mixed rocky bottoms silt and sand fed by marine waters through channels connecting with the shore and by rainwater. The Strait of Messina is a very environment particular with unique characteristics throughout the Mediterranean. It represents the meeting point of two basins (the Tyrrhenian and the Ionian) whose water masses have different characteristics creating an environment with strong currents and turbulence. These hydrodynamic characteristics are due, among other things, to intensified tidal movements from opposing phases in the Ionian and Tyrrhenian and a mixing of warm and superficial waters of the Tyrrhenian with intermediate cold masses of the Ionian, etc. (Magazzù et al. 1995). These hydrodynamic conditions are reflected on the conformation of the seabed and on the sedimentation rhythms (Colantoni, 1995), determining the settlement of particular and unique biocenoses in the Mediterranean (Giaccone, 1972; Fredj & Giaccone, 1995; Zampino & Di Martino, 2000): algae biocenosis photophile of the upper infralittoral with the elevated layer consisting of the Association to Cystoseira tamariscifolia, Saccorhiza polyschides and Phyllariopsis brevipes, biocenosis of the lower infralittoral with the presence of Laminaria ochroleuca and biocenosis of the circalittoral with the Association a Cystoseira usneoides and the facies a Laminaria ochroleuca and Phyllaria purpurascens. Also interesting is the presence of a Posidonia oceanica prairie that extends from Ganzirri to Messina (Zampino & Di Martino, 2000).

The perimeter includes areas that are of strategic importance in the economy of migratory flows of birds moving within the basin of the Mediterranean. In particular, the area of ​​Antennamare and the Strait of Messina, together with the Strait of Gibraltar and the Bosphorus, represent the three areas in which Mediterranean migratory flows are concentrated, especially in spring. In fact, from 20.000 to 35.000 specimens pass through the Strait of Messina belonging to numerous species of birds, especially birds of prey, some of which are very rare and / or deserving of maximum protection. The ridge of the Peloritani Mountains it also offers nesting possibilities for avifauna species relevant for the protection of biodiversity at regional and national level such as Aquila chrysaetos, Falco biarmicus and Greek Alectoris withakeri. The lakes of Faro and Ganzirri also offer refuge and trophic opportunities to migrating species, especially birds aquatic plants, and for some of them they also represent significant nesting sites. Finally, the particular malacofauna of these environments should not be underestimated lake that hosts populations at times very differentiated and exclusive of this very particular aquatic ecosystem. This area, which coincides with the extreme northeastern tip of the island, has a notable phytogeographic significance above all for the presence of rare or endemic species. Also in this area are circumscribed some very peculiar and specialized vegetal associations absent in the rest of the island. The populations in Laminariales, as well as the populations in Cystoseira usneoides, present in the Strait of Messina, are very particular and peculiar, linked to the intrinsic hydrodynamic characteristics of this environment. 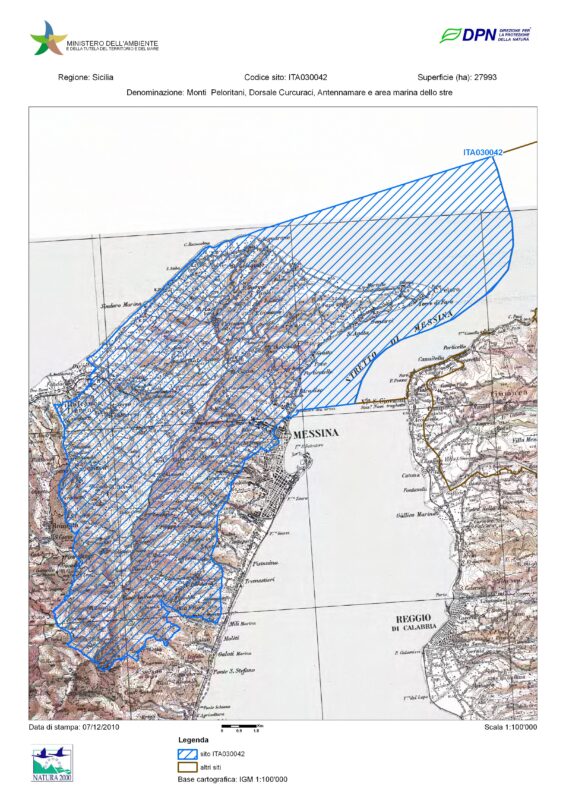 Click to see on Google Maps
Messina, ME
Rate it (1 to 5)
1.001
Send a notice to the publisher
[contact-form-7 id="18385"]
Deactivate the Youzify Membership System to use the theme's login form here.