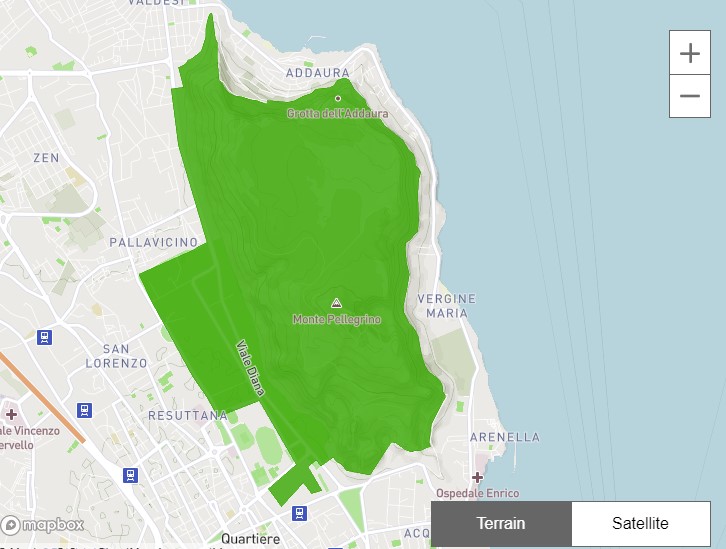 The first protection measure of today's Reserve area dates back to the end of the 400th century, on the initiative of Ferdinando di Borbone who, with a royal edict, expropriated an area of ​​about XNUMX hectares including part of the Monte, della Favorita and the marshes of Mondello, to dedicate it to agricultural experimentation activities and to a hunting reserve.
In 1991 the Monte Pellegrino area was included in the Regional Plan of Parks and Natural Reserves, approved by councilor decree n.970 of 10 June 1991.
Today's Reserve was established with the Decree of the Regional Councilor for the Territory n.610 / 44 of October 1995, and entrusted to the management of the Italian Rangers Association.

The reserve, extended to 1.050 hectares, includes the entire massif of Monte Pellegrino (reserve area A) and the Favorita park (area B or pre-reserve), with the exception of sports infrastructures.

Monte Pellegrino is a mountainous massif of carbonate rocks with a prevalence of limestone, 606 meters above sea level, characterized by an extremely lively orography, rich in practicable plateaus, and with steep sides rich in karst phenomena, with as many as 134 caves of marine origin and / or karst.

The area is included in the site of community interest ITA020014.

The steep ridges of the promontory host botanical species typical of coastal cliffs such as the dwarf palm (Chamaerops umilis), the prickly pear (Opuntia ficus-indica), the caper (Capparis spinosa), rock cabbage (Brassica rupestris), the Mediterranean pearl herb (Glandora rosmarinifolia), the euphorbia of Bivona (Euphorbia bivonae), the rock carnation (Dianthus rupicola), the widow of the cliffs (Scabiosa cretica) as well as some endemics such as the cornflower of the cliffs (Centaurea ucriae).

The undergrowth hosts splendid orchid, such as for example the endemic Ophrys lunulata, priority species according to Habitat directive of the European Union (code 1905).

Part of the area of ​​the Real Estate of the Favorita it is finally occupied by cultivated areas (citrus, gardens, orchards, experimental agricultural fields) and reforested areas a coniferous.

Among the mammals present in the park are the fox (vulpes vulpes), weasel (Mustela nivalis), the Savi vole (Microtus savii), the wild boar (Sus scrofa), the wild rabbit (Oryctolagus cuniculus). In the caves the presence of the bat Rhinolophus ferrumequinum.

The Reserve is home to over 40 species of birds. Among the birds of prey, in addition to the peregrine falcon (Falco peregrinus), to which the mountain owes its name, the buzzard (Buteo Buteo), the kestrel (falco tinnunculus), the barn owl (These albums), the scops owl (Otus scops) and the owl (athene nocturne); the area is also on the migration route of the honey buzzard (Pernis apivorus). Other observable birds are the blue rock thrush (Monticola solitarius) and cruises (Loxia curvirostra).

As for the reptiles, the reserve protects the leopard snake (Zamenis situla), and the asp (vipera aspis); there are also many examples of the Sicilian lizard (Podarcis waglerianus).

Among the amphibians it is worth mentioning the presence of two endemics: the painted discoglossus (Discoglossus pictus) and the Sicilian emerald toad (Bufotes boulengeri siculus), of which there is a large colony that reproduces near the Gorgo di Santa Rosalia, a natural pool that rises not far from the homonymous sanctuary.

Information on geolocation and the route to reach the place
View the place with Street View (if any). Relevant only if referring to tangible assets with associated address.
Location
Send a notice to the publisher
Share / Share