Other site features: The site, divided into two parts, falls within the western part of the so-called "Monti di Palermo", where it extends overall
for 8.604,00 hectares. The first of the two biotopes includes the reliefs that develop above Punta Raisi, affecting the ridge of Monte Pecoraro; it falls within the
territories of the municipalities of Cinisi, Terrasini, Carini, Giardinello and Montelepre. Among the highest peaks are Pizzo Corvo (910 m), Pizzo Caccamo (909 m), Pizzo del
Merio (935 m), Montagna Longa (975 m), Pizzo Peluso (921 m), Pizzo Montanello (964 m), Pizzo Mediello (850 m), Pizzo Ceresia (817 m), Pizzo Barone (m
897), M. Saraceno (949 m) and, isolated further west, M. Palmeto (624 m). The second biotope includes the orographic ridge that develops from the coastal area of
Tommaso Natale towards the interior, including the peaks of M. Castellaccio (890 m), Cozzo di Lupo (788 m), Pizzo Vuturo (1006 m), Monte Cuccio (1047 m),
Pizzo Cirina (867 m), Monte Fior dell'Occhio (942 m), Cozzo della Campana (911 m) Mount Gibilmesi (1152 m), Punta Busilmeri (928 m), Monte di Mezzo (891 m) and
Punta Giardinello (874 m). The latter affects the municipalities of Capaci, Isola delle Femmine, Torretta and Palermo. These are altogether the resulting findings
from the tectonic superposition of geological bodies of a predominantly carbonatic nature, referred to two stratigraphic-structural units deriving from the deformation
of the Panormide Platform: the M. Gallo-M. Palm grove (upper Trias-lower Miocene) and the Cozzo di Lupo unit (upper Trias-lower Miocene). From the point of view
bioclimatic, the territory is mainly comprised between the lower subhumid thermo-Mediterranean and the lower subhumid mesomediterranean, with
average temperatures between 17,5 and 13 ° C and rainfall of 600-800 mm. The plant landscape is greatly affected by the intense uses of the past,
as well as fires that occur almost annually, so the slopes are generally quite bare and monotonous, following a very
common to that of the other limestone reliefs of the coastal strip of north-western Sicily. Undisputed dominates the secondary prairie in Ampelodesma,
floristically impoverished formation by the perpetration of the action of fire; in the same areas, artificial forest plants have sometimes been carried out through
the use of conifers foreign to the territory (genera Pinus, Eucaliptus, Cupressus, etc.), which are also affected by fires. Very sporadic results in the
complex natural forest areas, generally with an almost point-like distribution mainly represented by holm oaks or deciduous oaks
dominance of Quercus virgiliana.
4.2Quality and importance
In addition to a significant faunal importance, the area denotes a notable floristic-phytocenotic interest, in particular as regards the rupicolous communities,
in which a large number of endemic plant species and / or of significant phytogeographic interest are represented. The expressions of forest vegetation
they are almost completely absent, denoting in some cases characteristics of relictuality. Along the detrital areas of the coastal slopes there are some strips of holm oak,
as well as residual strips of carob and ash trees, the latter of which were once exploited for the extraction of manna. The species listed in section 3.3 ed
indicated with letter D refer to entities that are quite rare in Sicily, whose presence in the territory in question is in any case considered to be of significant
phytogeographic interest.The mountain ridge between Monte Pecoraro and Raffo Rosso denotes a high fauna richness, with numerous species of birds of prey
sedentary or migratory. The area is also affected by a significant migratory flow, both in spring and in autumn, representing a nerve center
of the migration route that affects north-western Sicily. 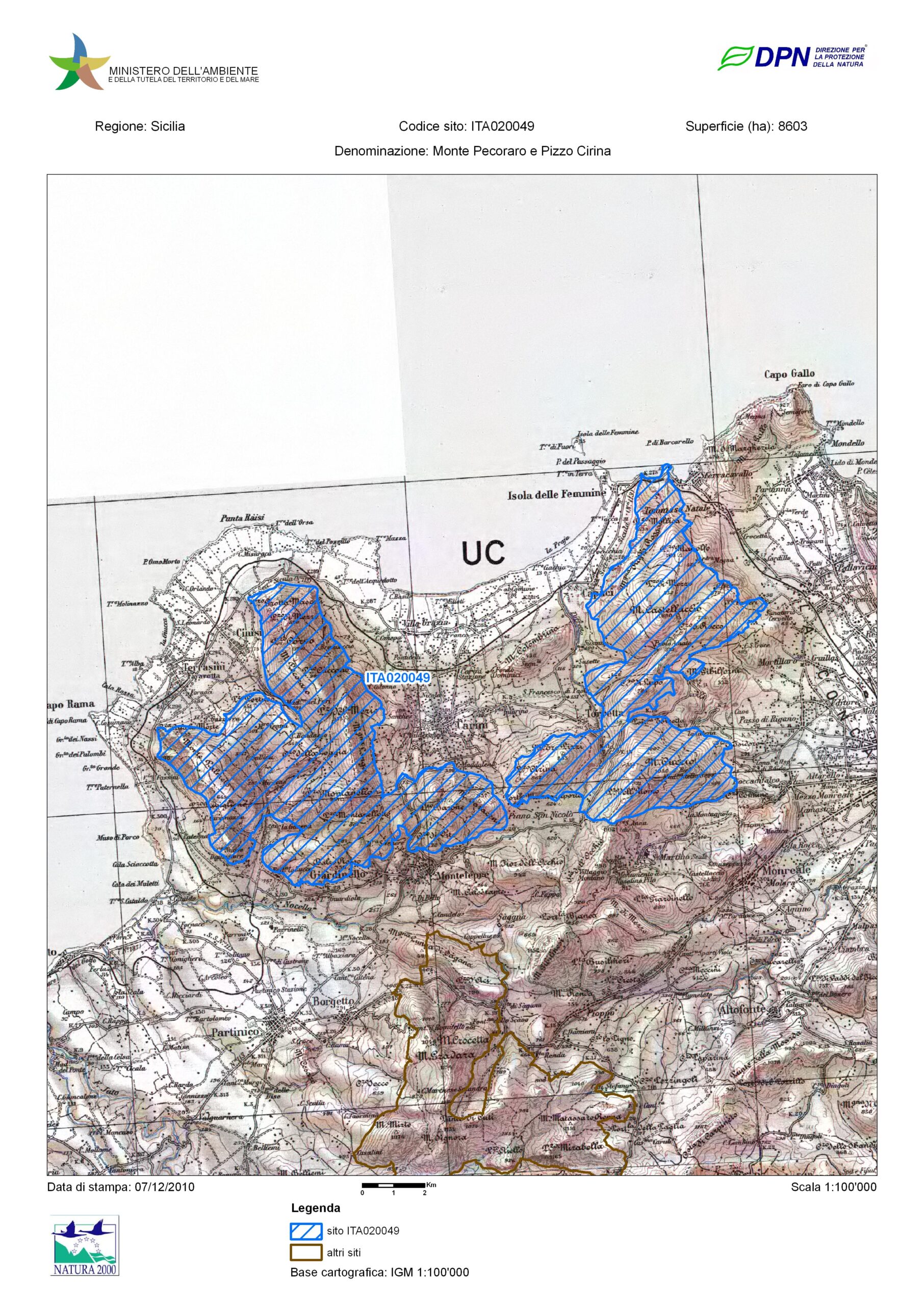 Click to see on Google Maps
50 SP20, Cinisi, PATerrasini, PACarini, PAGiardinello, PAMontelepre, PA
Rate it (1 to 5)
4.001
Send a notice to the publisher
[contact-form-7 id="18385"]
Deactivate the Youzify Membership System to use the theme's login form here.