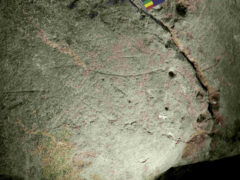 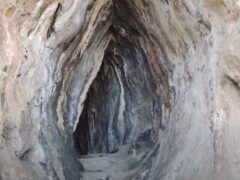 Cave of prehistoric interest with the presence of rock art.

"The cave opens at the foot of the Coda di Volpe edge, with a triangular entrance of 6 m at the base by 10 m of
height, partly barred by a sturdy wall which served as a splinter guard in the temporary occupation
housing during the last world war. On the right wall a band of perforation of lithophagous organisms
marine sign the presence of the sea. In the walking surface the rock emerges and Vaufrey “où il
ne reste plus aujourd'hui aucune trace de remplissage "; this must have emerged even when it was inhabited towards
the end of the Paleolithic due to the presence, on the right side and one third from the bottom, of a group of 23 linear engravings.
Between the lines there are two converging lines that form an acute angle, interpreted as a figure
vulvar and a wavy one (20 cm), modulated like the back of a large mammal: deer or horse.
On the right wall, at the back, black strokes can be observed, suggesting inscriptions or drawings
evanides for rubbing the backs of animals. It is legible, also drawn in black, a ladder (26 cm) with one
ten pegs. The physical characteristics of the black dye look identical to that of the inscriptions
of the Grotta Regina.
According to the report by Anca and Gemmellaro (1867) from the Vitelle cave would come the remains of an elephant.
For what was said before, regarding the floor, the news is unlikely. The provenance of these remains
it is not possible to attribute it even to the nearby Perciata cave because the same Anca who excavated it (1959) met
exclusively anthropogenic sediments and did not investigate further. " (Text: Giovanni Mannino: The Caves of Monte Gallo: in the Archaeological Newsletter Superintendence of Palermo 15/2016)

Gianfranco Purpura: Depictions of ships in some caves around Palermo. Extract from the magazine “Sicilai Archeologica” Year XII n. 40 2nd half 1979

download the document: Depictions of ships in some caves around Palermo

Giovanni Mannino: The Caves of Monte Gallo: in the Archaeological News Superintendence of Palermo 15/2016

198) D. Petruso - V. Forgia - L. Sineo: The human population of Sicily: an interdisciplinary review in the Archive for Anthropology and Ethnology - Vol. CXLIV (2014)

200) Gioconda La Magna (edited by) Between Etna and Simeto - Archaeological research in Adrano and its territory - Proceedings of the study meeting for the 50th anniversary of the establishment of the Adrano Museum Adrano, 8 June 2005 - Library of the Regional Province of Catania 2009. Download file: The_Neolithic_in_Valle_del_Simeto

History of Sicily - 1.2. Paleolithic and Mesolithic:

History of Sicily - 1.2.1: Religious sentiments and burials in the Paleolithic and Mesolithic

History of Sicily - 1.2.2: Art in the Paleolithic and Mesolithic

History of Sicily - 1.2.3: Archaeological sites of the Sicilian Paleolithic and Mesolithic

PRESS: Well cataloged but partially geolocated. We invite you to provide your contribution by providing us with useful information that will allow us to geolocate the listed asset. See also "Cultural Heritage to be Geolocated"

Click to see on Google Maps
To be geolocated, Palermo, PA
Rate it (1 to 5)
2.502
Send a notice to the publisher
[contact-form-7 id="18385"]
Deactivate the Youzify Membership System to use the theme's login form here.