The area of ​​the SIC covers a total of about 333 hectares, within the territory of the municipalities of Campofranco and Milena (province of Enna), and
includes the homonymous Natural Reserve of Monte Conca. The territory extends from 150 meters (in the lower part of the riverbed) up to 437 meters at the top of M.
Conca. Other small reliefs include Cozzo Don Michele (373.5 m), Rocca di Tullio Nord (326 m), Rocca di Tullio Sud (342 m) and Rocca di Don Michele (317
m). It is crossed by the watercourse of the Gallo d'Oro stream, which flows from east to west. From a geological-stratigraphic point of view, the area falls within the
so-called "Fossa di Caltanissetta", corresponding to the present foreland basin of the Maghrebid Apennine chain. These are substrates ascribed to clayey complexes
(Tortonian), evaporitic (Messinian), marly-calcareous (Lower Pliocene), alluvial deposits of the valley floor (Recent) and detrital (Recent). The complex
evaporitic consists of banks of gypsum alternating with chalky clays, sometimes interspersed with small lenses of sulphurous limestone; they are found in the outcrops of
Monte Conca, Cozzo Don Michele, Rocche di Tullio and Rocche di Don Michele. From the bioclimatic point of view, the territory is mainly part of the
the thermo-Mediterranean zone (lower average annual temperature = 16 ° C), with an upper dry shadow type (average annual rainfall of 500-600 mm).
climacic vegetation is practically non-existent, so the plant landscape is quite barren and denuded, physiognomized by the dominance of
xerophile grasslands, in addition to the cultivated fields - widespread in the areas surrounding the SIC - as aspects of replacement of the forest aspects of the past. From the point of view
syndynamic, the landscape is mainly referred to the following series of vegetation: - Olivastro (Oleo-Euphorbio dentroidis sigmetum), linked to
chalky and calcareous-marly crests; - of Holm oak and Lentisk (Pistacio-Querco ilicis sigmetum), relative to the lithosols that characterize the cooler slopes
north facing; - of the chestnut oak (Oleo-Querco virgilianae sigmetum), limited to the areas of the valley floor, characterized by more or less clayey soils
deep, mostly occupied by cultivated crops.
case of rupicolous, clayey-gully, riverbed-riparian areas, etc.

The territory is rich in superficial karst phenomena; the "Inghiottitoio" - which opens onto the southern slope of Monte Conca - and its "Risorgenza" characterize a
interesting water system, currently active and quite suggestive. The area - of significant historical-archaeological interest - has a certain floristicophytocenotic and landscape importance, with various rare floristic entities or of considerable phytogeographic value (see section 3.3D). The site is also home to various species of
rare and / or threatened mammals and birds. 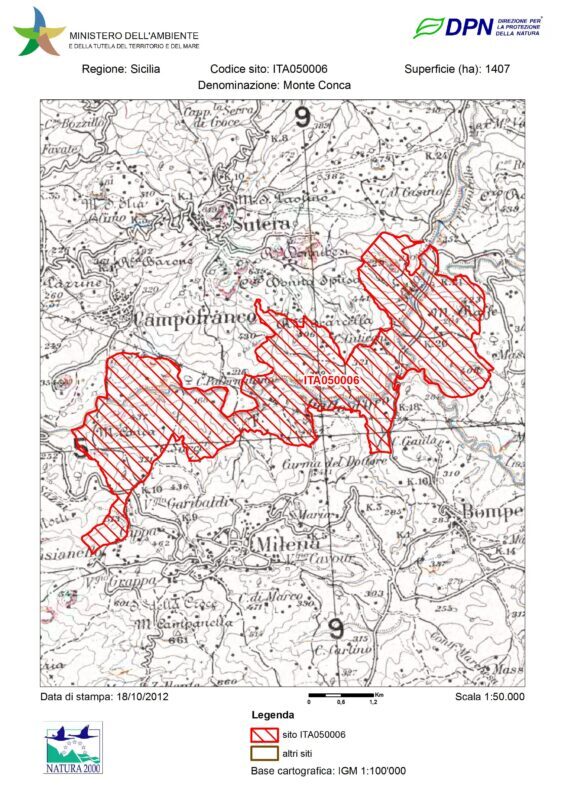 Click to see on Google Maps
Provincial Road 24, Campofranco, CLMilena, CL
Rate it (1 to 5)
0.000
Send a notice to the publisher
[contact-form-7 id="18385"]
Deactivate the Youzify Membership System to use the theme's login form here.