Heroes and legendary figures LIM: Register of Places of Identity and Memory Places of the Myth
Messina
Ratings, Comments and User Experiences
Rate it (1 to 5)
5.001
Location
Location Pace

Places of the Myth of Scilla and Cariddi

Property included in the LIM register of the Sicily Region (Places of the Sacred) - Sector "Places of myth and legends" in the following sub-category: Places of metamorphosis

Scylla and Cariddi were two sea monsters who lived in the Strait of Messina.

Scilla she was a blue-eyed nymph who spent her days on the beach of Zancle. One evening a sea god half man and half fish was seen by Glaucus. Glaucus fell in love with Scylla, unrequited, asked for help from the sorceress Circe asking for a love filter which in turn fell in love with Glauco and when he refused he transformed, in revenge, the rival Scylla into a huge and very high monster with six enormous heads of a dog with three rows of teeth each. In horror, Scylla threw herself into the sea, turning into a rock. Scylla is described by Homer inOdyssey, XII, 112 and following and by Ovid in books XIII-XIV of the Metamorphosis.

Charybdis she was a naiad, daughter of Poseidon and Gaea, devoted to robberies and famous for her voracity. One day he stole Geryon's oxen from Heracles and ate some of them. Then Zeus punished her by transforming her into a monster with a gigantic mouth and an infinite voracity, Charybdis sucked up the sea water and rejected it, creating huge eddies that sank the ships in transit. The legend places it near one of the two sides of the Strait of Messina, in front of the cave of the monster Scilla.

Ships entering the strait were forced to pass close to one of the two monsters. 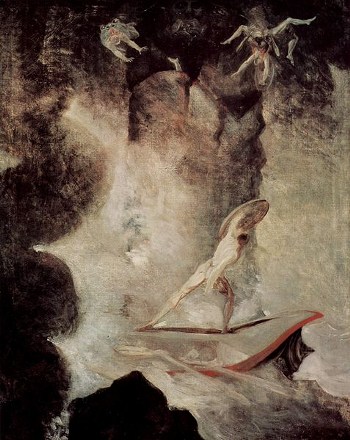 Visit Data Maps Heritage: Set of databases of Sicilian and Maltese Cultural Heritage and to know other databases (nature, baroque, archeology, material assets and much more)