Cults and divinities LIM: Register of Places of Identity and Memory Places of the Myth
Sicily
Ratings, Comments and User Experiences
Rate it (1 to 5)
0.000

Places of the Myth of Poseidon

Identified with the Roman Neptune, Poseidon belongs, according to Greek mythology, to the caste of the Olympic gods.

Son of Rhea and Cronos, he is brother of Zeus and Pluto, with whom he shares the dominion of the earth. Zeus is considered the master of the sky, Pluto the master of the underworld and Poseidon the master of the sea. It can trigger thunderstorms and even earthquakes that it causes by hammering the seabed with its trident and is often represented armed with a trident, a weapon used by tuna fishermen. Tuna is, in fact, one of its attributes.

It is often seen represented on a cart pulled by horses, sometimes replaced by monstrous animals, half men and half snakes and the cart is surrounded by fish, dolphins and sea creatures of all kinds. 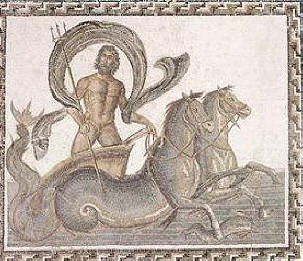 Neptune on the chariot pulled by Hippocampi. Mosaic, XNUMXrd cent. d. C., from the villa of the Uadi Blibane.
(Sousse, Tunisia, Archaeological Museum).

The cult of the god of the sea could certainly not be missing in a place surrounded by the sea like Sicily. Here he is considered the father of Trinaco, the oldest king of Sicily, but also of the Sicilian king. The legendary people of the Lestrigoni, who would have populated Sicily in the most remote times, is considered his descendant.

There are traces of the cult of Poseidon in Syracuse, Selinunte and Messina; in the latter city, according to what was narrated by Diodorus Siculus (lib. IV.85), a temple in his honor would have been built by his son Orione.

The discovery of coins depicting the divinity, would attest to the presence of the cult also in other Sicilian cities such as Catania, Tindari, Palermo and Lipari [1].