Myth of Philis and Achamante

Property included in the IWB register of the Sicily Region (Places of the Sacred) - Sector "Places of myth and legends" in the following sub-category: Places of metamorphosis

According to the myth, the flowering of the almond tree is due to the unfortunate love between Acamante, son of Phaedra and Theseus, and Phyllis, daughter of the king of Thrace.

Acamante during the journey for the Trojan war, found himself stopping in Thrace, where he met and fell in love with Philis. He left for the war that lasted 10 years during which Philides waited in vain for his beloved. After the war Philides, not selling to return Alcamante, I think he was dead and in desperation he died of pain.

The goddess Athena, moved to pity for the death of the young princess and wanting to give her a sort of immortality, transformed Phyllis into an almond tree. Upon his return, learned of Philis' death and his transformation, he wanted to visit the almond tree. Found the almond tree he hugged him. Thus it was, that suddenly, the tree blossomed and covered itself with flowers instead of leaves, as if to want to return Acamante's embrace. 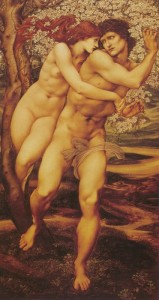 Visit Data Maps Heritage: Set of databases of the Sicilian and Maltese Cultural Heritage and to know other databases (nature, baroque, archeology, material assets and much more)