The SIC area falls within the municipality of Serradifalco. The site includes a lake formed in the middle of the last century due to a natural underground landslide, in
an area occupied by a karst sinkhole. The lake therefore replaced the original marshy environment that was located in correspondence with the collapsed sinkhole. The
greater water intake is currently due to the waste water of the town of Srerradifalco, which, not being purified, creates a hypertrophic environment, with high
values ​​in particular of phosphorus. The lake has been classified as polyptych in relation to its limited depth. The conductivity values ​​are particularly high
during the summer, due to evaporation, while the ionic composition appears to be linked to the geological characteristics of the area, in particular high
values ​​of Ca and Na. The substrate is referable to the evaporite formation of the Messinian, from the pedological point of view they are reported for the regosuoli area. Bioclimate
upper average dry mesomediterranean, with average annual rainfall of 561 mm, average annual temperature of 16 ° C (Caltanissetta station). The lake and its
adjacencies host amphibious and submerged lake vegetation, as well as hygrophilous ephemeral lawns

The phytoplankton community is dominated in the warmer period by Euglenophyceae, in the autumn by Cyanophyceae, Chlorophyceae, etc., while in the
winter period the Charophyceae dominate. Biomass due to Cyanophyceae is reported as very significant during the summer, particularly for
presence of Anabenopsis elenkinii, a taxon reported for the first time in Italy on this site. As for zooplankton, elevated are reported
values ​​for cladocera in winter, while in summer the copepod Euclyclops macruroides dominates. Notable fluctuations in phytoplankton biomass have been
observed in the lake between winter and spring, in relation to the role of herbivores. Also represented within the site are species of the vascular flora of
phytogeographic interest (section 3.3: D). The site hosts large contingents of bird species during migrations. It is also a place of wintering for hundreds
of ducks and other aquatic species. 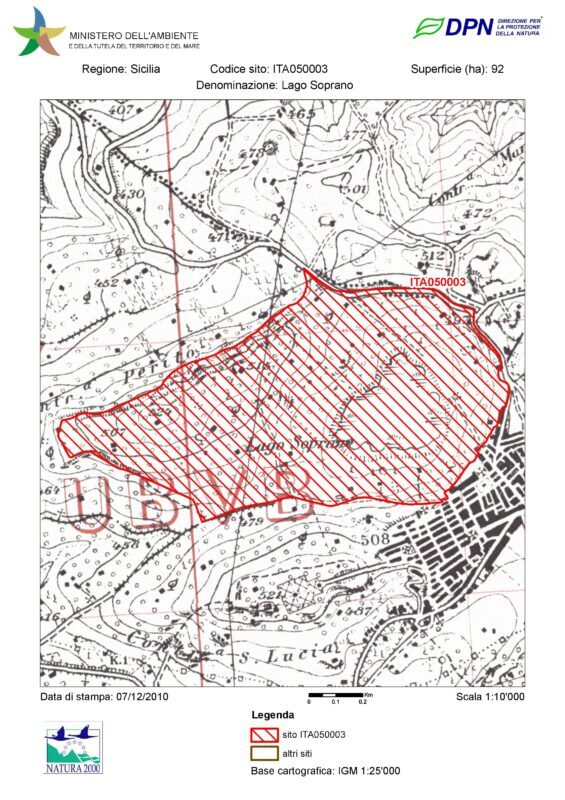 Click to see on Google Maps
Unnamed Road, Serradifalco, CL
Rate it (1 to 5)
2.001
Send a notice to the publisher
Deactivate the Youzify Membership System to use the theme's login form here.