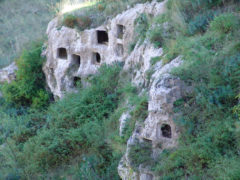 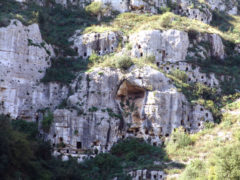 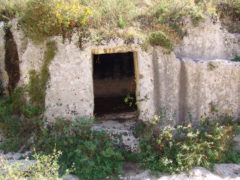 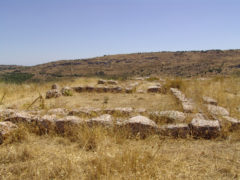 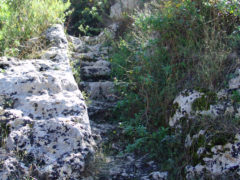 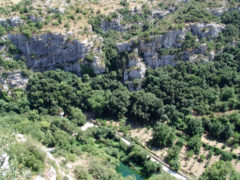 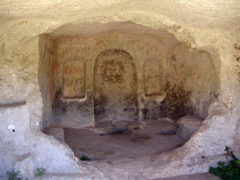 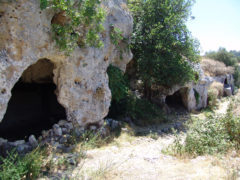 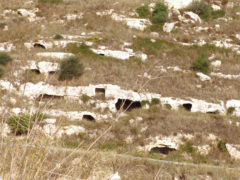 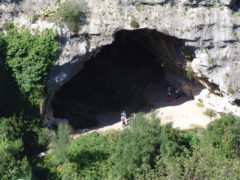 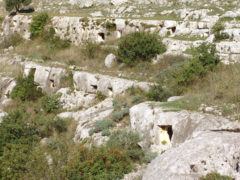 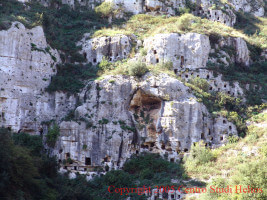 Pantalica is a naturalistic-archaeological locality in the province of Syracuse, located between Ferla and Sortino. Since 2005, together with the historic center of Syracuse, it has been recognized as a UNESCO World Heritage Site.
The site is located on a plateau, isolated from the nearby hills by means of deep valleys formed over the millennia by two rivers, the Anapo and the Calcinara (Bottigliera), which have determined the canyon orography characteristic of the area. The Anapo Valley is accessible from two gates connected to each other, from the Sortino side and from the Ferla side. The visit to the plateau can instead start from the so-called Sella di Filiporto, which can be reached from the town of Ferla or from the other side, from the Sortino side, passing over the so-called Bat Cave.
The archaeological site, most likely attributable to one of the Sicilian Ible, has a notable naturalistic interest, in fact it is part of the Pantalica Oriented Nature Reserve, Anapo Valley, Torrente Cava Grande.
The archaeological area consists of a large necropolis with thousands of "cave" type tombs (we are talking about over 5.000 tombs) located in the sheer walls of the valleys. The Necropolis of Pantalica is one of the most important Sicilian protohistoric sites, from this site comes most of the information on the transition between the Bronze Age and the Iron Age of the island.

All that remains of the ancient city is the necropolis, thousands of tombs surrounding the town have been found. Paolo Orsi grouped the funeral cells into 5 groups:

Premise: It is possible to visit the site thanks to the paths on which various tables are located that help the visitor to orient himself. you meet is that of the saddle of Filipporto, also called Porta di Pantalica because this point was considered the entrance to the ancient town. The path is not always easy, make sure you have plenty of water!

Here is the itinerary: 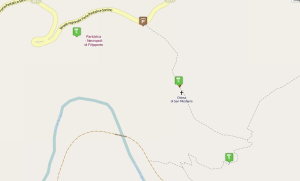 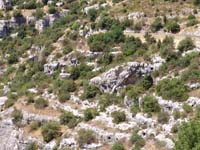 at the parking of the saddle of Filipporto, looking to the right you can see the Necropolis of Filipporto made up of a thousand tombs that extend on the slopes and in the basin of the Anapo, belonging to the last phase of the city (IX, VIII century BC) 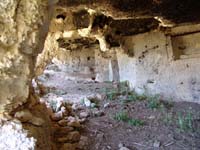 From the Sella di Filipporto car park, take a path that runs along the south side of the plateau, the itinerary offers interesting glimpses of the underlying Anapo gorge and reaches the Byzantine village of Filipporto with rectangular rock dwellings

Following the same path used to reach the Byzantine village of Filipporto you reach the Oratory of S. Micid 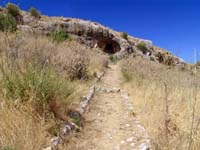 iary, once decorated with Byzantine frescoes.The oratory proper has a rectangular plan, ends in the east with an apse flanked by two niches that simulate the minor apses, while the space reserved for the faithful is divided from this, which is configured as a real presbytery, through an iconostasis . Along the apse wall there are traces of the subsellia (benches for presbyters) men 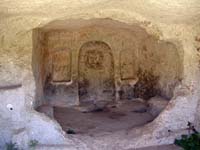 three is particularly interesting the double sloping ceiling, which seems to imitate the roofs of the subdial churches (in the open). The decoration, although now fragmentary, was certainly very rich, so much so as to adorn both the church and the apse. At least two layers of fresco can be recognized, the lower one reddish and yellow and the upper one blue. In the apsidal basin you can see the figure of the Pantocrator flanked by two angels, while on the walls some panels hosting saints by now illegible were placed in a paratactic sequence except for a possible San Mercurio (according to the inscription in Greek O AΓΙΟC ΜΕΡΚ [ΟΥΡΙΟC]. 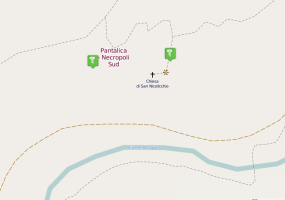 From the small church of S. Micidiario, it is possible to follow the path for about 1 km, you will arrive at the southern necropolis (IX-VIII century BC), the most recent of the necropolises, it has about 700 tombs, here there are large tombs room, one of the most grandiose in Pantalica, was probably the royal tombs, also given their proximity to the Prince's Palace. The archaeologist Paolo Orsi, found artifacts belonging to the IX VIII century. 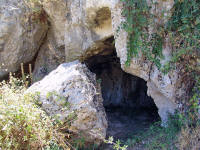 Following the path towards the southeast, after about 100 m, you will find the Byzantine rock church of S. Nicolicchio. The rupestrian room is configured as an oratory with a rather complex plan. It is made up of the unification of several rooms (probably excavated in different eras), which are secondary to the main room that develops towards the east where it ends with a central apse and two small niches on either side of it. Unfortunately much of the decorative apparatus has been lost, from the surviving traces we can recognize the figures of Saint Helena and Saint Stephen and of an unidentifiable Saint. Regarding the dating of these frescoes, however, there are not a few problems of a historical and stylistic nature; Lamb and Messina, however, precisely by analyzing a certain stiffness and dryness in the way of rendering the drapery, suggest recognizing in these frescoes the most ancient testimonies of rock painting in Syracuse (VII century). 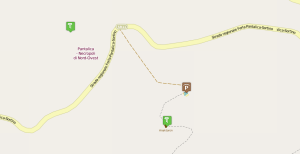 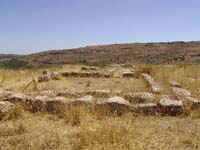 Returning back along the path and following the signs you will arrive after about 400 m, at the Anaktoron or Palazzo del Principe

The Anaktoron palace, is a megalithic building of large blocks, with several rectangular rooms, it is an evident imitation of the Mycenaean palaces so much so that some scholars have hypothesized the presence of Mycenaean workers in Sicily. It belongs to the first period of Pantalica (XII-XI century BC). Only the foundation blocks remain which, however, make it clear how extraordinary the construction was in such a remote era. The building was modified and reused in the Byzantine era.

From the Anaktoron, following a path south-east of the plateau, you can return (1,4 km), passing through the southern Necropolis, to the saddle of Filipporto.

For those wishing to avoid the long walk, it is possible to reach the Prince's Palace, starting from the parking lot of the Filipporto saddle, and continuing on the asphalted road for about a km, you will find a dirt road on the right, after a few hundred meters it is possible park approximately 100 meters from the Anaktoron. 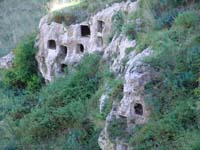 From the saddle of Filipporto, continuing on the asphalted road, after a few hundred meters, on the left it is possible to see the northwest necropolis, one of the oldest (600th - XNUMXth century BC). The necropolis of the North West extends along the valley of the Sperone stream, from the saddle of Filipporto to the confluence of the Calcinara river and has over XNUMX tombs. 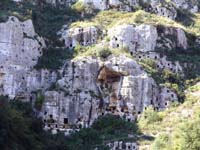 Continuing on the asphalted road, further on, always on the left, you can see the north Necropolis (1500th-1500th century BC), the oldest, largest and most dense of the necropolis of Pantalica. It extends for about XNUMX meters beyond the confluence of the Sperone river with the Calcinara river and includes about XNUMX tombs. 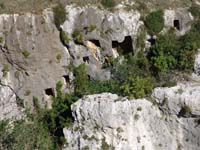 Continuing on the asphalted road, leaving the path on the right to reach the Anaktoron, about 1,9 km from the saddle of Filipporto you will reach a bridge over a small valley (the Cavetta), from the sides pierced by caves of houses of the Byzantine age. Before the bridge, a path to the right, heading east along the right side of the valley, reaches, in approx. 350 m, the Cavetta viewpoint; from here you have a beautiful view, below, towards the confluence of the Cavetta with the Anapo where the very high rocky walls, almost vertical, are pierced by very dense groups of tombs, which form the necropolis of Cavetta, from the XNUMXth-XNUMXth century with about 350 tombs.

Grotto of the Crucifix

Continuing along the path in the direction of the North Necropolis you will find another group of Byzantine houses and a Byzantine rock church known as “La Grotta del Crocifisso. The cave has an irregular layout tending towards a rectangle and seems to be composed of two contiguous rooms arranged in a non-axial way. On the right wall is the rectangular apse.

In the apse there are remains of a Crucifixion flanked by a female figure, recognizable with the Virgin. In the right arm of the cross Don Andrea Gurciullo, parish priest and local scholar, still read, in 1793, a Greek inscription which meant Christ save me. Along the walls of the left room you can see the figure of San Nicola and a Santa Barbara. Paolo Orsi and Giuseppe Agnello date it around 1200-1300 AD 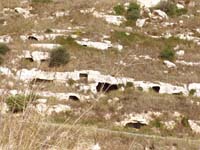 Beyond the bridge, leave a path on the left for the Byzantine village of Cavetta, and climbing up (approx. Km 2.2 from the Filipporto saddle) you reach the end of the road.

Cave of the Bats 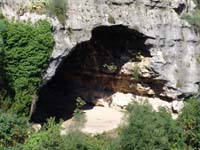 At the end of the asphalted road, there is an additional parking for cars (North Parking), from here it is possible to take a path that descends towards the Calcinara valley, opposite, on the other side of the Calcinara, the Grotta dei Pipistrelli is visible, more easily accessible from the Sortino side. The Grotta dei Pipistrelli is the largest natural cavity in Pantalica. The cave was once used for the production of saltpetre and for the collection of bat manure. The first large room is 18 meters wide, 28 meters long and 11 meters high. Inside there is a narrow passage that forms a sort of corridor 12 meters long, with muddy soil and walls full of encrustations; crossing this corridor you enter another large room, very dark, 68 meters long and 30 high, where hundreds of bats nest from which the cave got its name: “A Rutta re Gaddariti”.

Card inserted by: Heritage Sicilia in collaboration with the Helios Study Center

View all sites of Pantalica