The following is excerpted from 2 books:

Solarino [1] suggests that, in the period of the Sicani and the Siculi, there must have been many sanctuaries consecrated to the cult of the goddess Ibla and that, later on, inhabited centers gathered around some of them. In reality it must be said that, there is no certain information on the cult of a divinity named Ibla. Di Blasi [2], citing the historian Pausanias, writes that in Ibla Galeote there was a temple dedicated to the goddess Ibla, venerated by a corporation of priests, diviners and experts in interpreting dreams. These priests were nicknamed "Galeots".

A coin kept in the monastery of the Cassinesi fathers in Catania shows on one side a veiled woman with an ornament around her neck (believed to be the goddess Ibla), behind which there is a bee, and on the other a woman leaning on a rod with a vase in his hand, a dog at his feet and the inscription ΥΒΛΛΣ ΜΕΓΑΛΑΣ [8]

Instead, there are news of various locations or cities with a similar name, even if this does not mean that there is a relationship between these places and the cult of the goddess Ibla. Stefano Bizantino and Claudiano [3] speak of an Italian Ibla different from the Sicilian ones. The Germans had a divinity named Iludona or Ibladana, guardian of the foci (this Germanic deity was also known by the name of Hludana or Hluthena and was also venerated by the Roman legionaries stationed in Germany [4]); among the Gauls there was the goddess Isbel, also called Belisana or Belinuccia. An Irish locality inhabited by the Celts was called Ibla or Iblana and a very famous Ebla existed in Syria even before Sicily could speak of Sicani and Siculi.

Writers of the past have never hypothesized links between the cult of the goddess Ibla and the city of Ebla in Syria, due to the fact that the final location of Ebla took place only recently, in 1968 by the archaeologist Paolo Matthiae and that the excavations in this place they are not yet completed.

The first settlements in the Syrian Ebla are traced back to 3000/3500 BC and around 2600 BC Ebla played an important political and commercial role. It was destroyed for the first time around 2300/2200 BC and, after a phase of regrowth, it was destroyed again in 1600 BC After the last destruction, the city was almost completely abandoned, losing its inhabitants over the course of a few centuries. .

It is probable that, among the peoples who arrived in Sicily in the second millennium BC, there were groups coming from the powerful Ebla following one of the previously reported destructions. It is also conceivable that some of these groups, once they arrived at their destination, somehow wanted to preserve a memory of the powerful homeland by giving life to the cult of a divinity with the same name, then transformed into Ibla.

In ancient times it was not unusual to personify one's hometown. In Rome, for example, there was a temple built by Augustus in honor of the goddess Rome, personification and apotheosis of the city of Rome itself [5].

One could also think that the divinity whose name was later transformed into Ibla, was actually venerated by the people who emigrated to our island.

The fact that Ibla has been associated now with Demeter, now with Aphrodite, may not be accidental, in fact
a divinity that, due to its characteristics, seems to have given rise to the divinities of Demeter and Aphrodite, is the Assyrian-Babylonian goddess Isthar [6]. This goddess is, at the same time, goddess of love and fertility, but she is also a warrior deity. Just as the god of the underworld kidnaps Demeter's daughter, death kidnaps Isthar's son-lover, forcing her to go to the underworld to have her beloved returned. Even the Babylonians, in honor of Isthar, performed a rite similar to that performed in the Eleusine feasts in honor of Demeter: the public sexual rite between the priestess and the king. There is also no lack of elements that link Isthar to Aphrodite: the sacred prostitution of the priestesses and the dove, sacred to both divinities. Perhaps, it is not even a coincidence that the major sanctuary of the city of Ebla was dedicated to Isthar, as the discovery of a bust of a votive statue that the prince of Ebla, Ibbit-Lim dedicated to this goddess would suggest [7].

In reality, analyzing the aspects that characterize the cults of the Sicilian Ibla, of Demeter, of Venus Ericina, of the Carthaginian Tanit, of the phenician Astarte, of the Assyrian-Babylonian goddess Isthar, of the Sumerian Innana, of the Egyptian Isis and in general of all the "great mothers ", it is difficult not to think of all these divinities as a kind of great" syncretic river "which, starting from a single mountain on top of the world (the great mother), flows over the whole planet, changing its name in function of time and place and adapting to the psychology of the peoples who have the good fortune to live on its shores. 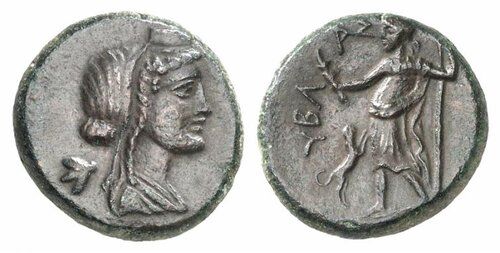 Another Ibla coin similar to the previous one of uncertain origin

[5] EWStoll: Handbook of religions and mythology of the Greeks and Romans. p.315.

[6] which in turn seems to originate from the Sumerian goddess of love Innana.

The Ible of Sicily

How many were the Ible of Sicily?

Among the first cities of Sican or Sicilian origin, the cities named Ibla deserve a separate discussion, if only for the confusion that has occurred and still exists in relation to the location and the right name to be given to each Ibla. In fact we talk about:

Historians have often used these names and this at first glance would suggest a myriad of Ible existing in Sicilian soil, in reality all these names refer to three, perhaps four, distinct Ible, and almost all of Sicilian origin. The most ancient writers in the history of Sicily have at times contributed to increasing the existing confusion about Ible, sometimes citing one instead of the other, or omitting the nickname that distinguished them. Just think of the "sweet Ibleo honey", which has been attributed to practically all the Iblei mentioned above. Other confusion has been made by the various copyists who, in transcribing texts, often in a language other than their own, have made it so, for example, that Hibla became Gibla or Herea became Nerea and therefore Nera. Furthermore, in recounting the events the dialectal form of the various writers often prevailed, for which a term or a name was written in different ways depending on the nation of origin of the writer, this probably happened for the terms Galeote, Galeotide, Geleotide, and Gereatide.

The Maggiore was perhaps called Tiella (or Stiella) and it is widely believed to place the site near Paternal. The small was also called the Minima, whose site is supposed to be that of Megara Iblea which, as it is known, is south of Augusta, as far as Ibla Minore is concerned, many agree that Ibla Erea has also been appealed because it is located on the erei mountains, perhaps mistakenly also called Ibla Nera, Gibla or Nibla, and yes thinks the site is that of Ragusa Ibla. 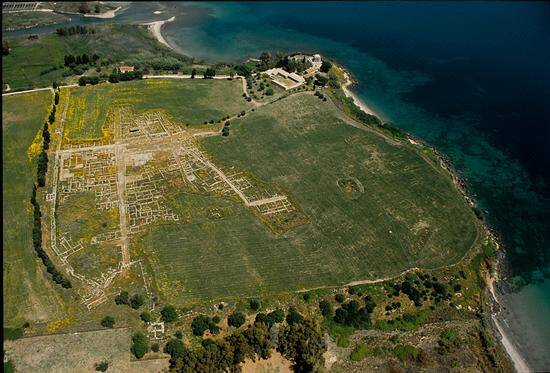 For a couple of years we have begun to think that Pantalica, a place located approximately halfway between Palazzolo Acreide and Syracuse, where a large prehistoric necropolis was found, has the right to be appealed as Ibla, even if it has not sure, in case he is also entitled to one of the aforementioned nicknames, which of these to associate it with. The fact that Pantalica is in the mountains that have been chianmati Erei, could suggest that the nickname is Herea, thus removing this privilege from Ragusa, or in trying to solve a question that has been going on for centuries one might think of Galeote, in fact in the past much confusion has been made in the attempt to assign a site to Ibla Galeote, and the attempt made so far by historians has not been the most fortunate. Beyond the name, a series of elements reinforce the hypothesis that Pantalica was one of the Sicilian Ibles. 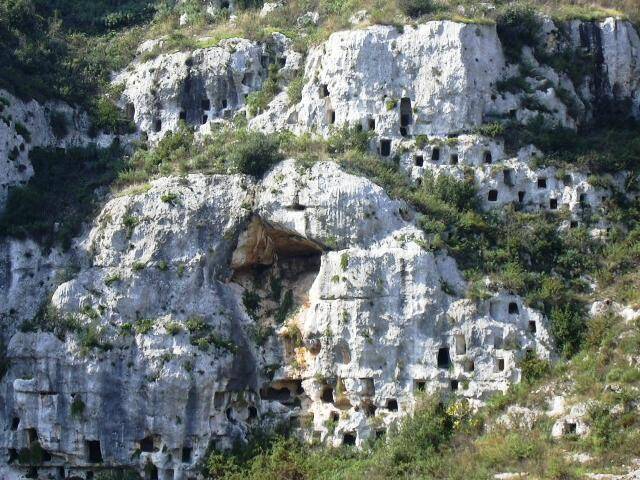 Tucidite [2] tells that a contingent of Megarese settlers would have founded their own city by concession of Iblone Sicilian king of Ibla, to which they gave the name of the mother country Megara and the appellative of Iblea to remember the gift of the land made by the king, Thucydides himself fixes the chronology to 729 BC The archaeological excavations so far do not seem to disprove Thucydides, in fact most of the remains can be dated from the VIII to the V century. BC The excavations on Megara and Pantalica seem to agree with Thucydides, in fact, if the archaeological remains in Megara are mainly Greek and do not seem to indicate a large settlement prior to the eighth century BC, everything in Pantalica seems to indicate the opposite, in fact the site of Pantalica can be considered as one of the most important protohistoric settlements in eastern Sicily. From the necropolis of the inhabited area two periods of Sicilian protohistory take their name, that of the final bronze of Pantalica Nord (XIII-XI) BC and that of the iron of Pantalica Sud (850-730 BC), some terraces erected to support a building have been found monumental on the top of the hill, which has been defined as the seat of the prince of the town. 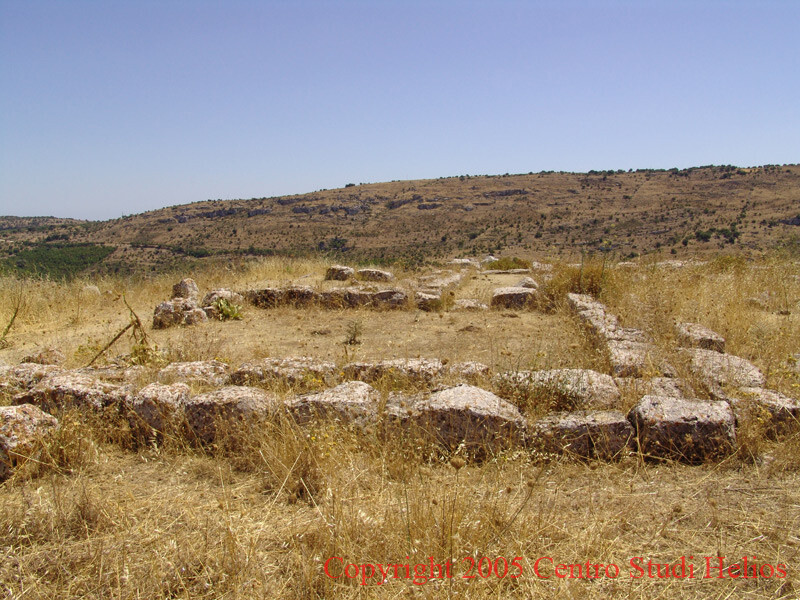 More than 5000 tombs have been found surrounding the town; those in the north and west are from the 850th and 730th centuries BC, the group of tombs to the south belong to 1000,850-XNUMX BC, while others are from the intermediate period (XNUMX BC). 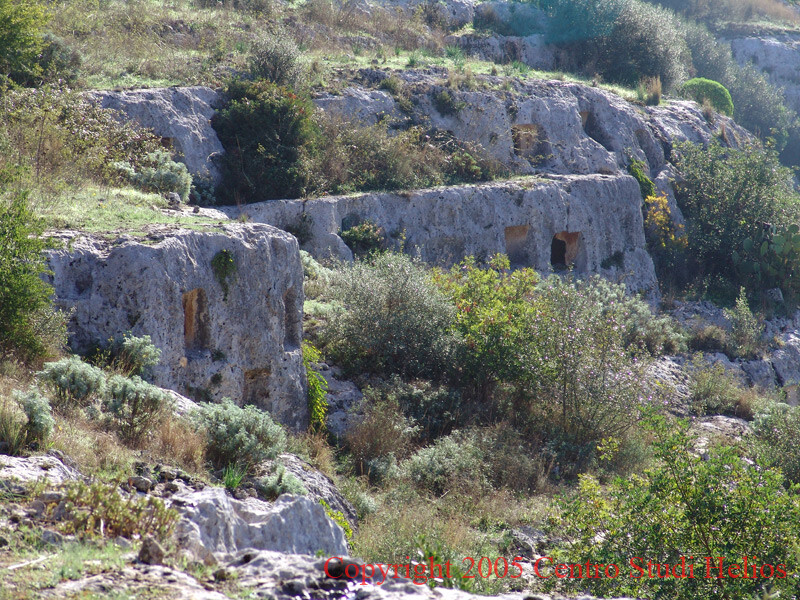 The fact that an indigenous center existed near Megara Iblea of ​​the Greeks, could be confirmed by the not rare custom of the Greeks, to establish themselves not far from an indigenous center, keeping their territory distinct from that left in the hands of the indigenous peoples. What seems very strange is that the inhabited area seems to disappear concurrently with the foundation of Megara Iblea and Syracuse, which would suggest that the inhabitants have suffered the same fate as the Sicilians expelled from the island of Ortigia, pushed towards the interior of Sicily. Traces have been found that would indicate a minimum of attendance after the arrival of the Greeks, a small sanctuary frequented in Greek and Roman times, could be the sign of the continuation of an indigenous cult, traces of Byzantine attendance were also found in the building that it is supposed to have belonged to the prince of the Sicilian town. 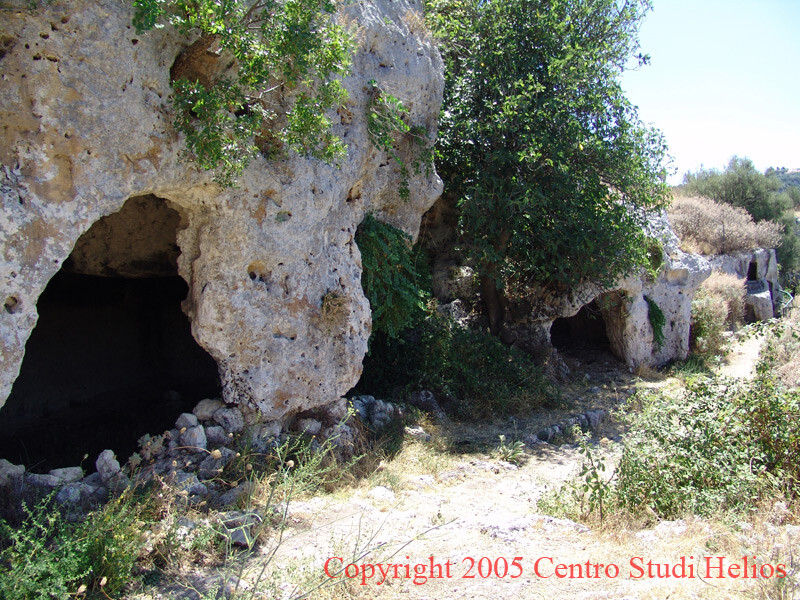 Information on geolocation and the route to reach the place
View the place with Street View (if any). Relevant only if referring to tangible assets with associated address.
Location
Reviews, Comments and your Experiences
Monster 1 - 1 of 1
Call

admin
·
19 September 2020
Write your reviews and comments on this card. You will contribute to its enrichment. 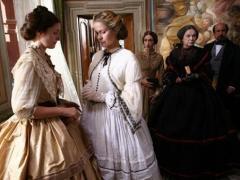