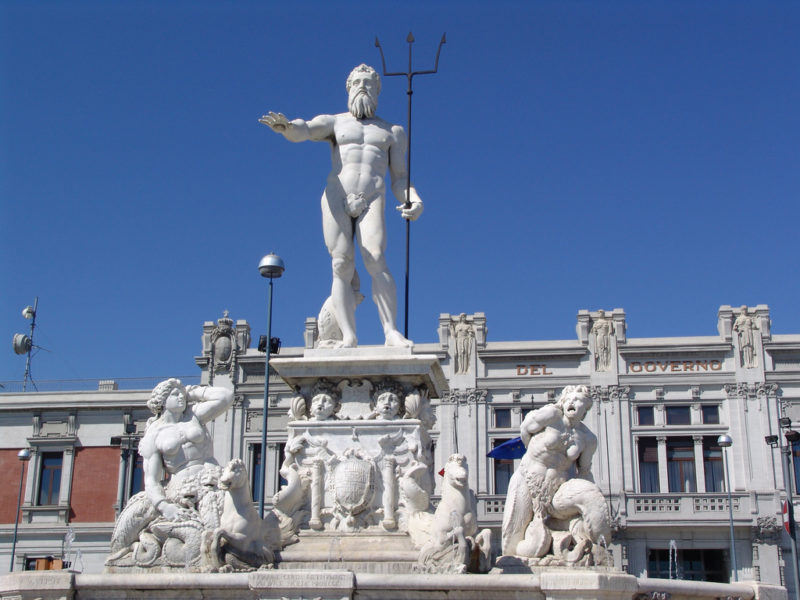 In 1547, foreman and sculptor of fountains in Messina, was Giovanni Angelo Montorsoli. Tuscan sculptor and close collaborator of Michelangelo, he executed, according to Vasari, numerous fountains in the city including in particular that of Orione, located in Piazza Duomo. This was so appreciated by the city Senate that Montorsoli was commissioned to sculpt a second one to be placed on the port, in front of the Palazzata, near the Town Hall. The fountain was completed in 1557 and placed on the seafront facing the city; on the sides were placed in 1757, Charles III of Bourbon, the work of Giuseppe Buceti, and a statue of Francesco I, by the Subba brothers, in 1832. The latter, in bronze, were cast, to make bullets during the revolution of 1848. In the same year, following the Bourbon bombings, Neptune and Scylla were damaged. In 1856, the sculptor Gregorio Zappalà, was commissioned to make a copy of the sea god and, the following year, Letterio Subba, a sculptor from Messina, made a copy of the Scilla. The originals were put aside (the statue of Neptune remained until 1908 inside the church of S. Maria degli Alemanni) and can be admired, now restored at the Regional Museum of Messina. The fountain, which suffered little damage from the 1908 earthquake, was moved to its current site, in Piazza Unità d'Italia, by the will of the prefect of the time to adorn the square in front of the Prefecture building. The monument re-proposes myths related to the city of the Strait; the collaboration (as regards the themes) of Francesco Maurolico is considered probable, also author of the inscriptions of the numerous couplets. At its present site, the fountain has changed position; in fact today it faces the sea. It rises on three steps on which rests a large octagonal basin richly decorated with marine motifs and ten rectangular plinths in each of which are carved in bas-relief, two intertwined dolphins and engraved with the names of the senators of the time, the viceroy D. JOANNE CERDA and the author, JO. ANG. FLOREN. SCULPSIT .; on the sides, there are oval-shaped tanks into which lion masks pour water. At the center of the basin, on a square pedestal, stands the statuary group with four sea horses on either side and the chained figures of Scylla and Charybdis, at the foot of the god Neptune. Scylla is represented as a monstrous female figure characterized by eight heads of barking dogs at the waist, under it a couplet, probably by Maurolico, reads: IMPIA, NODOSIS, COHIBETUR. SCYLLA, CATENIS PERGITE SECURAE FOR FRETA NOSTRA RATES. On the opposite side, also chained, there is the terrible siren Charybdis, screaming, with a hairy stomach and pisciform tail under which we read another couplet: CAPTA EST PREDATRIX SIQULIQ INFAMIA PONTI NEC FREMIT IN MEDIIS SAEVA CHARYBDIS AQUIS. On the walls of the pedestal there are two masks on each side, from which water flows into the basin placed below, representing the winds, subjects of the god Neptune. On the front side, in bas-relief, the crusader shield of the city of Messina between two columns, on it there is a frieze and the inscription D. CARLE V IMPERANT MDLVII; on the opposite side is the Spanish coat of arms with the inscription: PHILIPPO CAROLI V IMP., REGNANTE MDLVII. Finally, at the top of the fountain, there is the statue of Neptune, just over four meters high. As already mentioned, it is a copy made in 1856 by Zappalà; during the removal of the original, a medallion with the image of Montorsoli was found under the foot of the statue which was kept in the Museum. Neptune presents itself as an imposing lord of the elements; he is in fact god of the sea, of the elements and also of earth shaking. The right hand is raised with an imperious gesture, in the left he holds the symbol most congenial to him: the trident. At his feet are the terrible chained Scylla and Charybdis, helpless.