The site includes a large expanse of open sea and an island (Isola delle Femmine or Isola di Fuori). The territory considered falls within the municipalities of Palermo and Isola delle Femmine. For most of the year, coastal currents from west to east prevail over the whole area. They are mostly drift currents, generated by the blowing of the winds from the North-West, dominant throughout the autumn - spring period. These cause a strong hydrodynamism, giving rise to strong turbulence between the Punta del Passage and around the Isolotto. The winds of the first quadrant are limited to the winter period and blow with intensity. Periodically, in periods of relative calm, the coast is hit by a strong tangential flow from the East, which remains constant especially in the season summer. During the summer and in periods of high pressure, the daily breezes blowing from the East prevail: they rise in the late morning and increase in intensity until it acquires a considerable strength in the early afternoon, which fades towards dusk and falls completely in the evening. Femmine, which rises about 600 meters off the peninsula of the same name, also known by the toponym of "Isola di Fuori", is an emergence of stratified Mesozoic limestones, deeply altered by wind erosion and the impact of storm surges. On the submerged walls of the islet there are hard bottoms covered on the surface from associations of photophilic algae, followed in depth by sciaphilous associations. On the north side the seabed falls in imposing rocky tiers alternating with platforms covered with fine sand. The north-east wall plunges into a cliff engraved by deep cracks, locally called "Finestroni": the currents of bottom carry large quantities of plankton and organic substance that allows a luxuriant development of concretionary communities (coral reef) to filter feeders, such as Eunicella spp. and Paramuricea clavata. The channel between the islet and the mainland is entirely occupied by a Posidonia oceanica prairie on rock that continues on both sides of the opposite peninsula. In the stretch of coast in front of Capo Gallo the Posidonia oceanica prairie is planted on matte e has a continuous distribution with a lower limit that in some sections reaches a depth of 36m. The entire rocky coast is bordered by a "trottoir" worms. The "trottoir" or vermeti sidewalk is constituted by the concretion of the cylindrical shells of Dendropoma petraeum, a gastropod mollusk characterized by a thick tubular shell with a triangular section. Individuals of D. petraeum settle on hard substrates at tidal level and end up with cementing the outcropping peaks of the rocks, forming a continuum that assumes the spatial development of a platform and that in the most favorable cases manages to reach the width of a few meters. Within the considered area, the biocoenosis of "anfiosso sand" can be found, characterized by the presence of "Lancet" or Branchiostoma lanceolatus, tiny representative of the Protocordates, animals immediately preceding the Vertebrates in the organization structural. The species is now very rarefied. Along the coast of Capo Gallo there are numerous karst cavities, distributed along the line of the leaf. They are for mostly caves or simple incisions on the rock, with no development inside. Only two of the cavities penetrate the dolomitic matrix, constituting true e own caves: the Grotta della Mazzara and the Grotta dell'Olio. The populations are typical sciaphilous concretions of caves, with a more or less algal component reduced.

The area in question is of great importance as many emergencies fall within it. Among these is the vermeti sidewalk, the best known as trottoir à vermets, biogenic construction due to the sessile gastropod Dendropoma petraeum (Monterosato), initially described precisely for the coast of Isola delle Femmine by M. De Quadrefages in 1854, and to a calcareous alga, Lithophyllum byssoides, which lives in highly hydrodynamic and slightly shaded ,. The vermeti sidewalk is extremely abundant and with an excellent level of structuring in the area considered. These organogenic constructions in the Mediterranean have a point-like distribution that increases their importance from a biogeographical point of view and makes them equivalent to In the infralittoral plain there are plant populations of Cystoseira sp.pl. on rocky substratum and Posidonia oceanica meadows on sand e on matte; the sciaphilous and coralligenous populations settle deeper. Noteworthy is the settlement of Laminariales in rheophilic environments in both areas including the marine reserve, the belt at Astroides calycularis constitutes the first fringe of the infralittoral immediately behind the sidewalk at worms. It is not ubiquitous, but is located on the parts of the cliff less subject to anthropic disturbance and more exposed to an intense exchange of water.Reported at -50m on the northern side of the islet a reef of red coral, Corallium rubrum, and the presence of Gerardia savaglia (the "black coral" of Mediterranean). The anfiosso sands cover the esplanades and the terraces interspersed between the rocky escarpments of the underwater cliff. They represent one relict formation increasingly rare due to the high sensitivity to silting and pollution of all kinds. They must be saved and protected, also because of the rarefaction of the pilot species, the amphioxus (Branchiostoma lanceolatum) 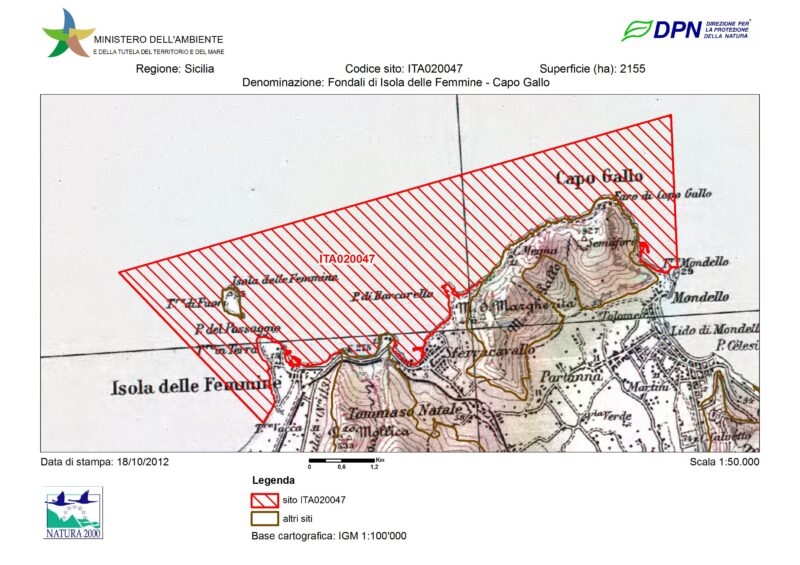 Click to see on Google Maps
82 Via Barcarello, Palermo, PAIsle of Females, PA
Rate it (1 to 5)
2.504
Send a notice to the publisher
[contact-form-7 id="18385"]
Deactivate the Youzify Membership System to use the theme's login form here.