The SCI coincides with the “Capo Milazzo” Marine Protected Area and borders with the ZSC ITA030032 “Capo Mlazzo”. It is characterized by the presence of a vast oceanic posidonia prairie and coral habitat. The presence of well-structured sidewalks with worms is of considerable importance. The site is characterized by the presence of the following habitats: sand banks with a weak permanent cover of sea water; Posidonia meadows; large coves and shallow bays; cliffs; submerged or semi-submerged marine caves. Sand banks are the environment that most affects the dynamics of typical organisms this area not only because they represent a trophic resource, but also because of the sediment suspended by the wave motion. The P.oceanica prairie it is distributed more or less evenly around the whole promontory. It is in a good state of conservation except near the Bay of S. Antonio. The large coves and shallow bays are located in indentations of the coast sheltered from the wave motion and characterized by a complex mosaic of photophilic benthic communities with high biodiversity, interdependent, belonging to the mid-littoral and infralittoral areas. They are characterized by a predominance of mobile bottoms, on which marine phanerogams are planted, alternating with hard substrates with photophilic algae dominated by Cystoseira spp. The cliffs featured in correspondence with the Scoglio della Portella, Many Trino and in the two shoals offshore (Secca di Ponente and Secca di Levante). The cliffs are richly populated by plant species some of which are considered protected species such as: C. amentacea, C. crinite, P. oceanica. Noteworthy are two o'clock rock formations located about 300 meters from the coast called Secca di Ponente and Secca di Levante. On the first there are large colonies of Paramuricea clavata which also represent the substrate for the implantation of colonies of Savaglia savaglia. A broad belt of Astroides calycularis surrounds this rocky massif. The censuses carried out show 5 caves of considerable size that house the communities of the district in small enclaves spatially due to the conformation of the caves themselves which allows the penetration of light. Where light is absent due to the particular morphology of the caves, original populations are established, especially in porifera and cnidarians, typical of dark caves.

It is characterized by the presence of a vast oceanic Posidonia prairie and coral habitat. The presence of sidewalks a well structured worms. Among the environmental characteristics of the area it is important to underline the presence of animal and plant species and communities included in the National Regulations, European Directives (Habitat annexes 2, 3 and 4) and International Conventions (Bern, Cites) which establish protection and conservation measures, banning their collection, damaging the sites and disturbing: - the vermentid mollusc platform; the fascia a Astroides calycularis; the cladocora benches caespitosa, the sciaphilous populations, the Corallium rubrum populations; the caves and submerged cavities, the P. oceanica prairie. Another characteristic element of the area is given by the frequent sightings of Caretta caretta sea turtles, a protected species and included in the IUCN red list. It is also estimated that the Tursiops truncatus population consists of about 20-30 individuals. the waters of Capo Milazzo represent part of the home range of many individuals of the population that probably has a wider distribution that includes the whole archipelago of the Aeolian Islands. Other marine mammals linked to the site seasonal are the fin whale Balaenoptera physalus, the common dolphin Delphinus delphis and the dolphin Stenella caeruleoalba 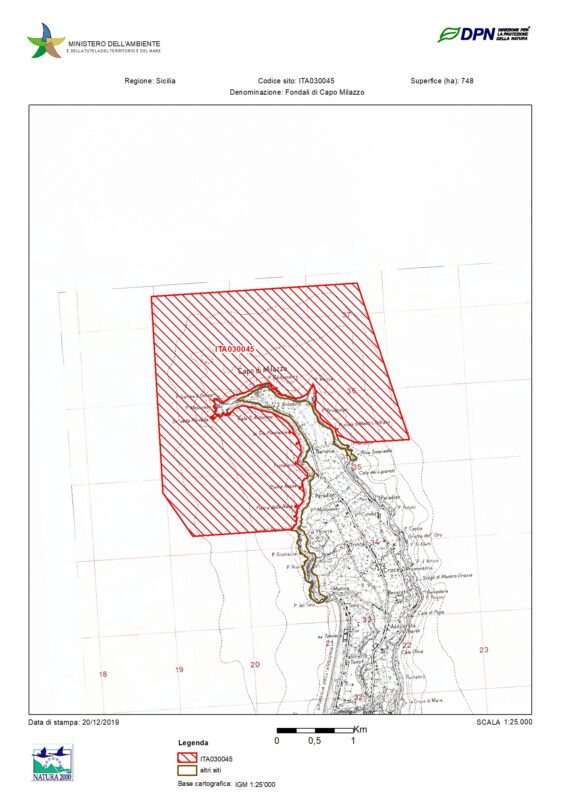 Click to see on Google Maps
3 Via Sant'Antonio, Milazzo, ME
Rate it (1 to 5)
4.673
Send a notice to the publisher
[contact-form-7 id="18385"]
Deactivate the Youzify Membership System to use the theme's login form here.