The island of Ustica is what remains of a complex system of basic volcanoes, now practically dismantled. The seabed around the island, rocky with only a few ed isolated bands of sand and pebbles, are made up almost exclusively of basic lavas and related tuffs which have partly submarine origin and form characteristic deposits. All the sides of the island are characterized by steep coasts, with particular cliff structures in the entire north side, damaged by massive landslides, and with a very steep slope to the South-South / East. Numerous caves characterize the south side, some of which formed by the action abrasive water on the calcareous sediments incorporated by the effusion lavas. Marine sediments are represented by thin fossiliferous limbs and clastic sediments which originated from tuffs. The composition of marine flora and fauna has a discrete subtropical affinity. The infralittoral presents the classic zoning of the Cystoseira populations typical of the Mediterranean extending into the circalittoral with populations of Cystoseira zosteroides and deeper with the presence of Laminaria rodriguezii. The precoralligenous and coralligenous biocoenoses are also well represented in the circalitorial plane. a discontinuous distribution along the entire coastal perimeter, in fact in correspondence with the pebbly bottoms of the north side and on the smooth substrates of the on the west side they are interrupted and are found mainly on small isolated mattes that are concentrated on the sparse expanses of sandy bottoms. The seagrass settlements are much denser on the entire southern slope, where the prairie also grows on rock. The Posidonia oceanica prairie present along the coasts of the island of Ustica it mainly presents a progressive lower limit on a rocky bottom at depths between 30 and 38m, in some cases it it has a clear limit when the rock stops on a sandy bottom. The high naturalness, the variability of the biocoenoses found in the seabed of the island and the great number of superficial and deep caves make the site of high naturalistic interest.environmental, are the areas of the Scoglio del Medico and Banco Apollo, characterized by a high wealth of species. The former hosts more populations numerous of the brown grouper and the denser shoals of the Sphyraena viridensis; Banco Apollo is clad at its top (-45m) by the stand at Laminaria rodriguezii of Atlantic origin, which in turn supports a very rich encrusting epibiosis which alone contributes to maximizing biodiversity. THE populations of the fronds of Laminaria include serpulidae, leafy and crusted bryozoans, encrusting epiphytic algae, colonies of coelenterates, porifera, and a crowd of predatory organisms closely related to algal epibiosis

Due to its biological richness, Ustica can be assimilated to a large shoal, a mechanical obstacle to the passage of currents. The movements of the sea and the water change plays a fundamental role in the quality and diversity of populations. The Atlantic currents allow the maintenance of the highs biodiversity values ​​resulting in a considerable flow of planktonic forms, which find in the rocky bottoms of the island the necessary substrates for their settlement and survival. The mixing of the Atlantic waters of low density and temperature with those of the lower Tyrrhenian, dense and warm, together with the flowing surface currents generate turbulent upward flows that increase the primary and secondary productivity of the entire marine ecosystem. the seabed of the island, therefore, is a place of attraction and concentration of schools of pelagic fish, but also a settlement site for meroplankton characterized by a mosaic of benthic and nectobenthic populations that enliven the submerged landscape. The texture of the bedrock and its roughness play an important role on biodiversity, as both characteristics represent an influencing factor for the attachment of larvae and the their development. The depths of the island of Ustica represent a hot spot, a "hot spot", where biodiversity is created and spread. new species endemic to the island, two polychaete annelids (Nereis usticensis and Chone usticensis), a polyplacophore mollusc (Ischnochiton usticensis) and a porifer (Didiscus spinoxeatus). 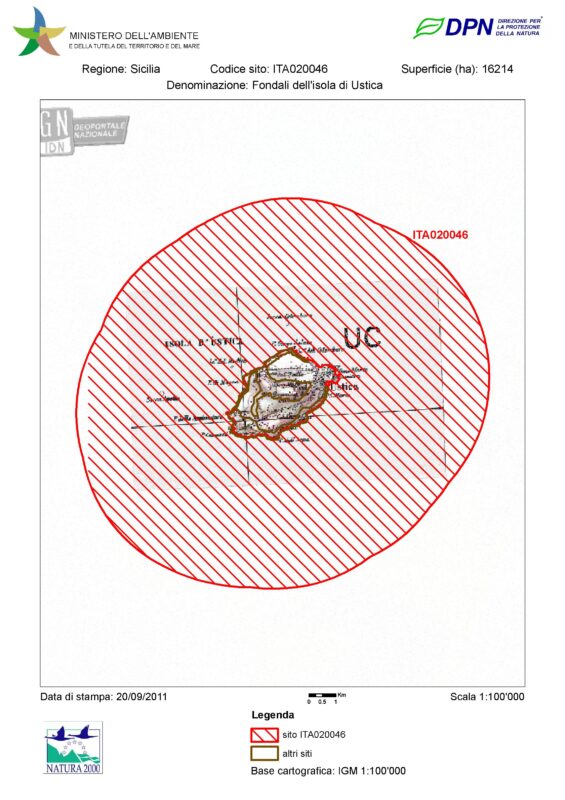 Click to see on Google Maps
Ustica, Ustica, PA
Rate it (1 to 5)
0.000
Send a notice to the publisher
[contact-form-7 id="18385"]
Deactivate the Youzify Membership System to use the theme's login form here.