The marine protected area "Plemmirio" represents an important site of considerable natural and landscape interest characterized, from a geomorphological point of view,
from a complex system of faults affecting the calcarenite platform of La Maddalena, and which conditions the morphology of the marine environment. The presence
of a rich and diversified benthic flora and fauna is testified by numerous priority habitats and endemisms, including the Posidonia oceanica meadows and the

coralligenous biocenosis, which are well represented in this area. The complexity of geomorphological and hydrodynamic factors, characterized by influence
of the intense currents of the Strait and of those of Atlantic origin, therefore contribute to the creation of a complex and particularly rich environment
natural in terms of biodiversity, endangered species and priority habitats. The benthic habitats and biocoenoses included in the protected marine area are well
preserved. In particular, the habitat 8330 in the mesolittoral has 12 semi-submerged caves which added to the other semi-dark and dark submerged caves present
in the infralittoral and circalittoral areas, they cover a total of about 1% of the surface of the site proposed as a marine SCI.
morphology of these sea beds, we are faced with a homogeneous morphology, with ridges that gently degrade up to 20 - 30 meters where the
Posidonia oceanica meadows; this is the case of the Gulf of Terrauzza, along the south-western side, and of the one facing the bay of Massolivieri, along the
north - eastern side. Steep rocky walls that in the arc of a few tens of meters from the coast sink to more than 50 meters deep are present around
Capo Murro di Porco. The first results of a recent ISPRA study in the waters of the Plemmirio have confirmed the reserve effect on the fish species that are
with greater biomass, sizes and specific diversity in the areas with greater protection. In particular, in zone A there is a presence, not found in the others
areas, of the red grouper Mycteroperca rubra.
4.2Quality and importance
Two
areas with low vulnerability (SV), which despite being subject to considerable anthropogenic pressure are characterized by extensive and well-structured biocenoses thanks to
to their high resilience, two areas of intermediate vulnerability (IV), in which it is not possible to predict the reaction to any adverse influences,
despite the presence of a limited anthropic impact and finally an area of ​​high vulnerability (EV), which, even if scarcely anthropized, has some
well-structured biocoenoses, but which, due to the geomorphological characteristics of the seabed, have a very limited extension. 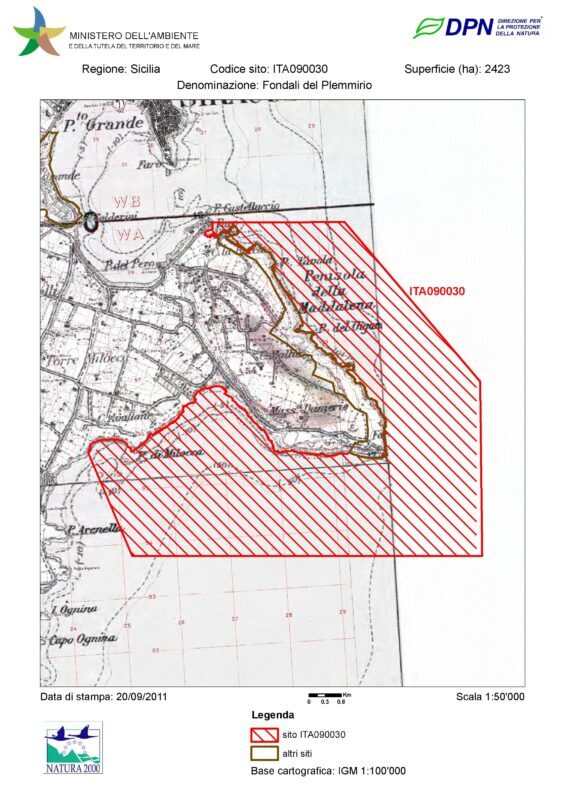 Click to see on Google Maps
Strada Capo Murro di Porco, Syracuse, SR
Rate it (1 to 5)
1.001
Send a notice to the publisher
Deactivate the Youzify Membership System to use the theme's login form here.