Other Site Characteristics
The SIC area falls within the territories of the municipalities of Ribera, Cattolica Eraclea, Montallegro, Siculiana. The landscape is characterized by the terminal stretch of the Platani rivers
and Magazzolo and from extensive sandy coasts. From the geological point of view, the area consists mainly of marly limestone and globigerine marl (Trubi) of the Pliocene
lower, by blue-gray clays and marly clays of the middle and upper Pliocene, by marine terraces consisting of Pleistocene calcarenites and conglomerates, and by
recent deposits (valley floor floods, terraced floods and sands. The soils are mostly classified as alluvial and regular soil. Rainfall varies between
about 510 and 590 mm on average per year, with average temperatures of 17-18 ° C, and a bioclimate that can be defined as the lower dry upper thermomediterranean.
vegetation, the area is characterized by pioneering aspects of unconsolidated sands and dunes, in particular in Cakile maritima in the sections closest to the
shoreline, and inland from cenosis to Agropyron junceum, to Ammophila arenaria, and to Ononis ramosissima and Centaurea sphaerocephala. The ancient communities
of scrub of the consolidated internal dunes have often been eliminated by anthropic action, and modest strips are today represented by shrub species and
lianose such as Pistacia lentiscus, Asparagus acutifolia, Phillyrea media, Prasium majus, Rubia peregrina, etc. In the vicinity of Eraclea Minoa there is still a
limited nucleus of open maquis with Juniperus turbinata and olive, in contact with garrigue environments with rosemary. On clayey-gully outcrops are also
there are shrub communities in Salsola verticillata (Pegano-Salsoletea), in which the endemic Limonium catanzaroi also participates, as well as meadows in Lygeum
spartum and halophilic therophytic grasslands. In the area there are also secondary shrubs to Calycotome infesta, grasslands to Ampelodesmos mauritanicus and grasslands to
steppe character. Along the rivers there are tamarisk nuclei, cenosis in Arundo plinana, and at the mouth of the Platani there is a large reed bed in Phragmites
communis.
4.2 Quality and importance
The area includes some of the most intact sandy beaches in Sicily as well as dune strands that host both natural and artificial plant communities.
Characteristic elements of the area are also promontories and cliffs made up of marly limestone and globigerine marl, as well as clayey gullies. Large areas of the
ancient dunes and inland areas have been affected by forestation plants with often intrusive exotic essences and in competition with the elements
Overall, the site has a high value both under the landscape and purely naturalistic aspects. They are also represented
several species of vascular flora of phytogeographic interest (section 3.3: D). The site is of great importance as a resting place and / or as a migration route
for large ornithic contingents both in spring and autumn. 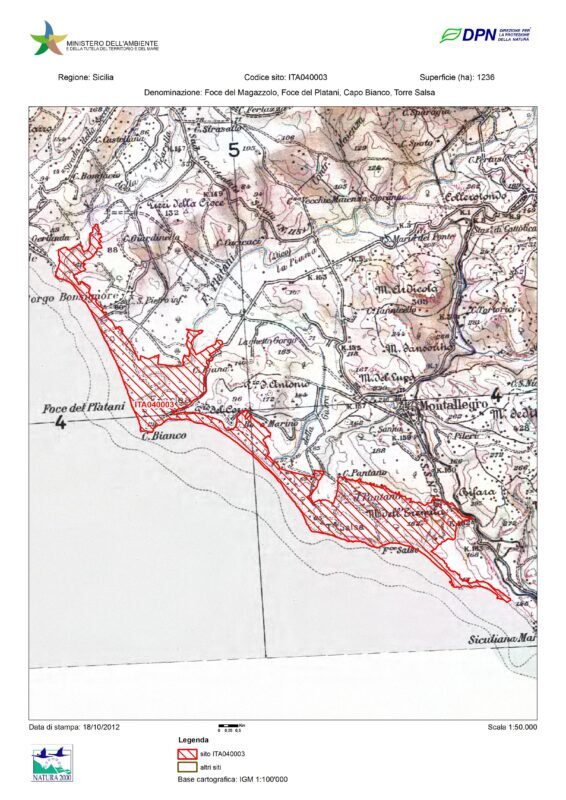