Mouth of the Belice River and neighboring dunes (EUAP0375) 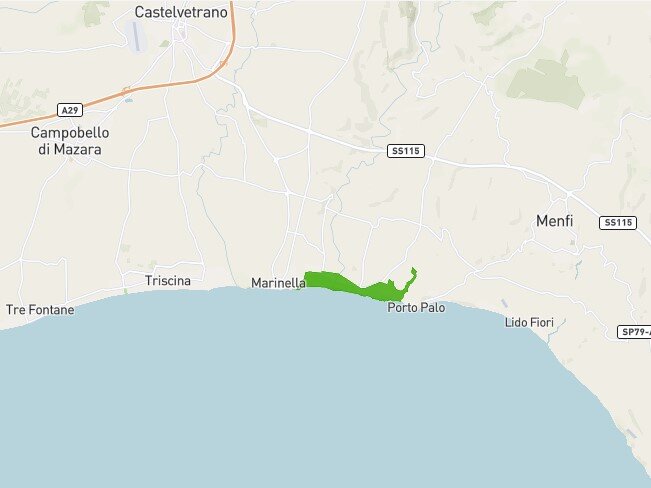 The reserve has a territorial extension of about 130 hectares called area A (reserve) to which are added another 140 hectares, classified as area B as it is an area of ​​the pre-reserve. The nature reserve of the mouth of the Belice river is a coastal lake area extended for over 5,0 km on the southern coast of Sicily and bathed by the Sicilian Channel, between Marinella di Selinunte and the promontory of Porto Palo, while inside it is delimited from the Castelvetrano-Sciacca railway line, suspended since 1986. Here the river Belice flows into the sea after a course of 77 kilometers. It was born inside Sicily in Piana degli Albanesi and has a seasonal trend. The mouth has depressed areas that are periodically flooded by brackish water. The coast is sandy and is dotted with small dunes that move under the action of the winds. The last stretch of the river enters the reserve following an almost straight path and then extends parallel to the coast and, after having formed a last loop, flows into the sea. The reserve was established, above all, to favor the conservation and reconstitution of the dune formations, flora and fauna typical of sandy environments. It includes different environments: the dunes, the mouth of the river with the typical marsh vegetation and, in the innermost part, the evergreen Mediterranean scrub.

The plants that can be observed, for the most part herbaceous, are equipped with particular underground organs (bulbs and rhizomes) to accumulate and retain water, in the aerial parts they present devices that allow to limit transpiration.
The flora present is marshy and includes various endemic species as well as species typical of marshy soils. Among the species present are the sea lily (chicory coast), the barrel (arundo donax), the rush, the bunting, the radish (Maritime Cakile), acacia, santolina (Santolina chamaecyperissus), alfalfa (Medicago marina), the sea squill (Urginea maritima), the thameric (tamarix gallica) and the horned poppy (Glaucium flavum).
Many of these species are pioneers, that is, they manage to colonize the dunes, fixing them and making them consolidated for the subsequent settlement of shrubs and herbs.
The dunes, which have become stable, become useful for the coastal ecosystem, hindering the salty winds and preventing the advance of the sand towards the interior.
In the innermost part, called pre-reserve, on the left side of the river, a slope rises on which an evergreen bush grows, characterized by the presence of plant species typical of the Mediterranean landscape, such as the olive (Olea europaea), mastic (lentiscus pistachio), tree spurge (Euphorbia dendroids), the caper (Capparis spinosa), spiny asparagus (Asparagus acutifolius), the carob (Ceratonia siliqua) and the dwarf palm (Chamaerops humilis).

The reserve hosts a rich avifauna, both sedentary and migratory. Among the species present are the kingfisher, the gray heron, the refectory, the coot, the moorhen, the seagull, the duck, the jay and the cuckoo.
There are also invertebrates such as bivalve molluscs and some reptiles such as the green lizard, the lizard and the grass snake. Some species of arthropods such as orthoptera find their ideal habitat on the sand dunes Brachytrupes megacephalus e Ochrilidia sicula, the beetle Pimelia grossa and the scarab Geotrupes marginatus.
The presence of sea turtles occurs periodically (Caretta caretta) which deposit their eggs in this area.

Information on geolocation and the route to reach the place
View the place with Street View (if any). Relevant only if referring to tangible assets with associated address.
Location
Send a notice to the publisher
Share / Share